Why doesn't Ash release Charizard even though it is his worst pokemon? You might ask for instances which I prove as follows:

I think these points are enough to conclude that Charizard is one of Ash's worst Pokémon, if not the words. I know Ash is also a bad trainer, but shouldn't Charizard perform well because it is very strong and Ash saved its life as a Charmander?

Why doesn't Ash release Charizard if it is so bad? Why did he leave him for training instead? Shouldn't he have completely eliminated it from his team?

The premise of your question is flawed. Ash does not release Pokémon due to their weakness. In fact, in Pokémon: Diamond and Pearl, we can clearly see that Ash is opposed to this practice. His rival in that series, Paul, does follow this practice of releasing Pokémon he deems weak, and Ash vehemently disagrees with him about it. Ash believes in bringing out the strength in his Pokémon. To make a point of this, Ash even takes one of the Pokémon Paul releases, Chimchar, and uses it to help him defeat Paul in the Sinnoh League.

When Ash releases Pokémon, he always has the well-being of his Pokémon in mind, not his own. For instance, he releases Butterfree so that it can find a mate and migrate. He also considers where they are needed: for instance, Squirtle joins a fire-fighting squad and Bulbasaur looks after the Pokémon at Professor Oak's place.

Ash considers his Pokémon his friends, and he won't release them just because they're weak. He will, however, send them to train with Liza in Charicific Valley for an indefinite period of time.

Though I have to say, your premise about Charizard being incredibly weak is also incorrect. A few embarrassing losses do not make a Pokémon incredibly weak in the Pokémon anime. Ash's Pikachu has lost to a starter Pokémon (Snivy) in Black and White. And Charizard has some impressive wins, including against Gary's Blastoise and against an Articuno in the Battle Factory. The anime's battle system is more chaotic and contradictory than the games, so we can't just take one battle and use that exclusively. And Charizard is considered by many to be one of Ash's strongest Pokémon.

I used Bulbapedia on some points, but I do remember some of this stuff: https://bulbapedia.bulbagarden.net/wiki/Ash%27s_Charizard

I really don't get 2 things from what you have said: 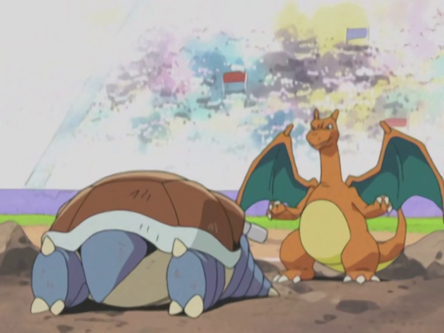 At any rate, I will answer the question with kinda the obvious reason - Charizard considered in the Pokemon Brand as main mascot figure (yeah even than Blastoise and Vynasaur), even 'till these days he's still considered, this fact led the anime production even returning him in the BW series - one of the reason to give Ash Charizard is because of the fact that Charizard is Mascot and the fact that his character based originally on Red in the first game, which we know by 2nd games generation as he had Charizard. But even if it's not for this reason, fact is that as long Charizard will be recognise as Pokemon Brand mascot, we will see more of him in the anime, and there's no reason for the production to make as release him or what so ever, since we know Charizard and Ash connection, and Ash won't release him because he is weak (as you may claim).

Investment for in the future when Charizard would eventually listen to Ash.

Not really a Pokemon answer, but if you've invested in a stock that happens to be declining in price recently, then do you necessarily sell? Or might you want until the stock goes back up in price? Depends on the stock right?

Ash's decision here is to continue to invest in Charizard. (And well, the investment did pay off. By ep118, look at how much Charizard listens to Ash.)

-2
Why is Charizard depicted as weak?

22
Why doesn't Ash Ketchum catch legendary Pokémon?
14
Why didn't Pikachu evolve?
11
Why doesn't Ash use his old Pokemon?
7
How strong is Ash?
10
What caused Charmeleon to become so disobedient to Ash?
3
Why did Ash need to go back to Pokemon School?