What is happening at the end of the Another manga?

I've just finished the Another manga and I don't really understand the final 2 pages.

What are the clanging noises, and who is the mysterious figure in the hallway? 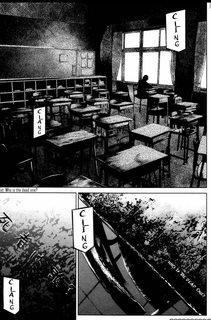 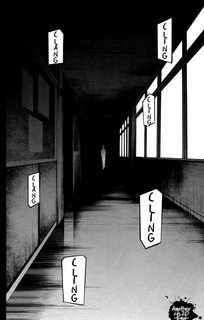 Well from my understanding of the anime, the Calamity is only stopped for that year. It will occur again, so the figure could be who will become the next Extra in the class.

Apart from that, my only other basis is the top left frame, if the seating positions are the same in the manga then figure where is sitting in Mei's seat which the class uses as a counter measure to make someone non existent and, I think it is also the same seat of the first student who died, but was allowed to graduate which caused the Calamity to begin the year after.

of course take this with a grain of salt since

It could also be Misaki, the student who was forever stuck in Yomiyama.

Misaki's final appearance in the manga was in the final chapter, walking around the school, suggesting he is still stuck on earth.

Meaning that he is the reason that the calamity would continue to occur, since he is trapped on earth.

Actually there's a prequel to this in manga. Before dying, Ritsuko (Kouichi's mother) saw the same shadow as this one and calls out 'Misaki-kun'. So the shadow is in fact MISAKI.

Not the answer you're looking for? Browse other questions tagged another or ask your own question.

15
Doesn't letting the non-existent students do exams acknowledge their existence?
2
Why does the hospital in Another have no fourth floor?
2
Did the girl who died 26 years ago exist in the same way as the extras?
7
What hints were shown during the series to who was the extra person in the classroom?
2
What drove the hotel cook to start attacking students?
1
Can someone explain about the attendance record in “Another”
1
What caused the calamity of present day class, back in April?