If it is Otsutsuki law not to kill another member of the clan, why are other Otsutsuki sacrificed as Ten-Tails fodder?

We know now that Otsutsuki members CANNOT kill other members without the permission from leader of the clan. (source)

Otsutsuki members cannot kill others from their clan without permission from the leader, yet they are doing just that each time they feed an Otsutsuki to the Ten-Tails in order to cultiavate a Divine Tree.

So why is this allowed? Killing another Otsutsuki isn't allowed.

This was done in order to make sure the Divine Tree was planted and the Chakra Fruit bore. And despite how crazy some Otsutsuki can be, I highly doubt that they would allow one to do something that could wipe out an entire planet without consulting the clan's leader. In fact, the main reason Otsutsuki operated in pairs (e.g Momoshiki-Kinshiki, Isshiki-Kaguya) was in order to sacrifice the lesser rank, in this case, Kinshiki and Kaguya, as shown in Boruto Chapter 51: 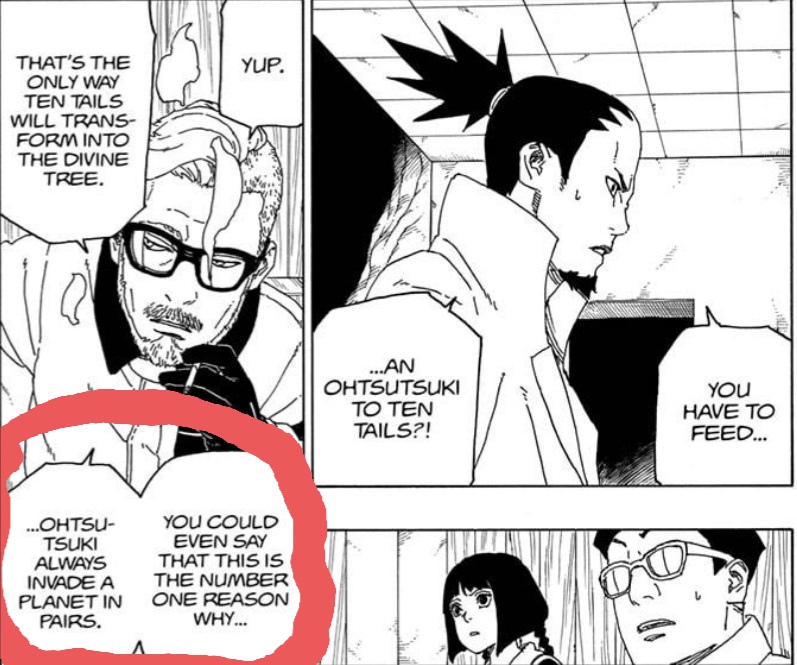 As previously mentioned, the Divine Tree isn't a toy and isn't something anybody could be entrusted with--which would make it illogical for this to be done without consulting the leader. The superior (Momoshiki, Isshiki) devours the Chakra Fruit, and the subordinate (Kinshiki, Kaguya) is sacrificed for the tree to be harbored.

As explained by Amado, they have the Karma seal to give onto someone. So if all goes well, both Otsutsuki are alive and the plan to eat the chakra fruit is completed. The leader (yet to be shown) would obviously know this process to plant the Divine Tree, giving more reason they would know the sacrifice needed, which grants permission for the subordinate to be killed. 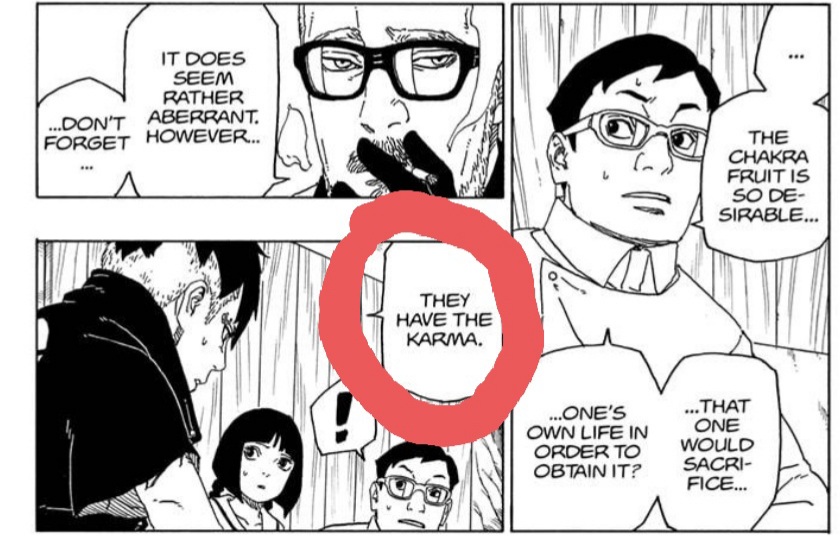 14
How does the Mangekyo Sharingan blind its wielder, and why are some wielders not blinded?
14
Why do only people from the Uzumaki Clan get chosen as the Jinchuuriki for the Nine-Tails?
8
Sources for Christian themes and motifs in Naruto?
5
What was the moral of Sasuke and Orochimaru's arcs across the Naruto series? Was there any?
9
Why does Naruto get a cloak from the Nine Tails while other Jinchuriki don't?
2
Why do people call the Bijuu "tailed beasts" if not all of them have tails?