How can one tell if Nappa has become a Super Saiyan?

We can identify Super Saiyans by the change in the colour of their hair.
With Nappa being bald, how could we identify he has become a Super Saiyan? Is it only by the increase in power?

It's not only by hair. 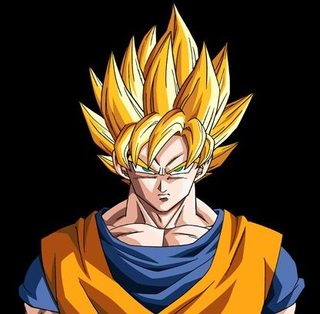 As you can see, the eyebrows and eye color changes as well. So you'll be able to tell.

As anime watchers, it's difficult for us to fully grasp how a character sees another character, and we have to understand how some react to others. When Freiza returns with his father and faces Trunks, he watches him become a Super Saiyan and shouts, "Those eyes! They have the same eyes!". This leads me to believe that the intensity of Ki energy seen through a transformed Saiyan's eyes is much more incredible than the solid blue-green circles that we see.

There is also the matter of aura, which is difficult to consider. We see a yellow, 2D arc over the character, but I can only imagine that to see one's aura intensify to a visible level, must be like watching them enveloped by fast moving, controlled flames.

These characteristics would surely be noticeable enough to see that he has transformed, but there is the playful idea that he could grow hair, much like Goku's SSJ3 form. However, I don't believe that with those gigantic muscles, Nappa could ever flow enough Ki through his entire body, without losing it at every nerve, to force his body to grow more hair. I see the Saiyan's hair serve only one purpose as a direct channel of Ki, and it grows when there is too much Ki for it to contain. With that said, I think Nappa's body doesn't allow efficient enough usage of Ki for him to need such a channel of Ki, nonetheless transform into the ultimate warrior form.

Well if you remember what Freiza comments on seeing Trunk is not about the hair but its those saiyan eyes.

Apparently the pupil becomes green on the transformation.

By looking at his eye brows and mustache if it is gold or if u see yellow super saiyn energy flair around nappa.

By that time, there was no ''yellow hair'' yet so it probably wasn't a wild thought. Nappa has a small role in the DBZ series compared to Vegeta who is his companion but hey maybe Nappa has hair on other places. E.g. eyebrows.

1
Who is this character from a Dragon Ball videogame?