What was the screen that appeared of Senjougahara during her phone conversation with Kaiki?

In episode 24 of Monogatari Series Second Season, while Kaiki is on the phone with Senjougahara, an image of her outside his window appears. During their conversation there are several other similar images.

What is this image supposed to represent? 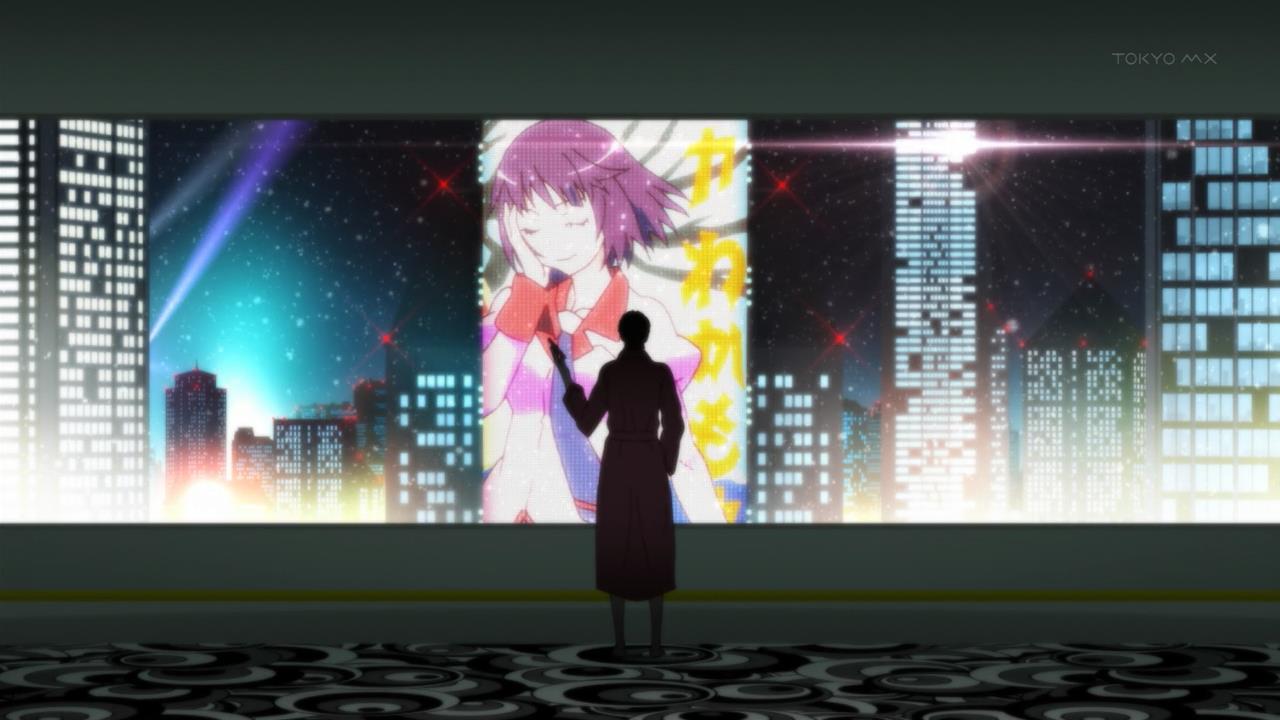 The first thing to note is that this is a clear reference to Blade Runner, the American scifi classic movie. In fact, it's the same reference as was made in Uchouten Kazoku (see Is the "wakakusa" ad a references to something?), namely to the famous geisha ads in Blade Runner which play several times throughout the movie. These ads are for the gastrointestinal drug "Strong Wakamoto", which is a real product that is quite popular in Japan, but essentially only known in the West through its connection to Blade Runner. It's not unusual that this scene would get referenced many times in different works, since it's one of the most memorable scenes in the movie and plays several times.

Here, the visible text from the OP above is 「．．．力わかも．．．」, which could easily be completed to 「強力わかもと」("kyouryoku wakamoto") which is exactly what the original Blade Runner ads said and also the name of the product. There's also the iconic pill swallowing animation a little bit later, which again is a very strong reference to the original ad:

As for why exactly the ad plays here, it's impossible to be sure, but there are several possible reasons. Of course, Monogatari tends to throw lots of references out just to keep viewers on their toes, and this is probably one of them. On a deeper level, it could be used in much the same way as the original ad, to disorient and slightly confuse viewers. Of course, given that the geisha is supposed to be attractive, a third possibility is that this is a metaphor to show that Kaiki has some attraction towards Senjougahara (there are some other hints of this as well in Koimonogatari).

10
Why wasn't there an OP for Shinobu Time?
2
How was Kanbaru's contract made void?
10
What's with this up-tilted head posture?
3
What series is this depiction of Araragi Karen referring to?
7
Why does Hanekawa know about Black Hanekawa?
5
Why does Kaiki keep changing shirts?
10
What is up with Tsukihi and Karen's boyfriends' names?
6
What is Ougi reading on her phone when she meets Araragi at the steps to the shrine?
7
Are the visualizations in the anime from the Light Novels?