Why do some people think that handholding should be censored in anime?

On Crunchyroll, there is an anime called TONIKAWA. In the comment section of episode 5, someone commented that there was too much handholding that was uncensored, over 900 people have liked the comment, and there was a lot of replies supporting the commenter.

10/30/20
The 2 kisses are one thing, but there's so much uncensored handholding

Why should handholding be censored? Isn't it just two people holding hands?

It's satire to the whole absurd censorship rules in the anime industry (see this video to know more on these absurd rules). I did some digging and found exactly what I needed:

Hand Holding is another act that is used in a similar manner to Consensual Sex in the Missionary Position. Threads with hand holding as the topic will often receive satirical replies usually criticizing how the original poster is sick or lewd. Related images of this at time feature anime characters with unnecessary censorship photoshopped over the hands to add further lewdness. (source)

There are many reddit post discussing this meme (see refs.) all agreeing on the satirical take but sometimes there are some specific but very absurd reasons:

Bonus: Not only holding hands were censored as a joke, even the thoughts of holding hands and cuddling were satirized to be impure. This is a scene from Oremonogatari: 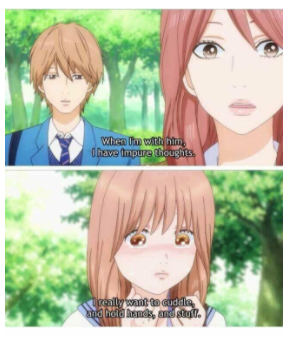 This image is actually a part of Tumblr post where the poster made a cheeky remark (Warning: Strong language).

It's sort of a running joke in the anime community that holding hands is a lewd and explicit act, and this in turn has spawned jokes about how hand-holding should be censored. I'm unsure how and why this joke evolved, but this r/OutOfTheLoop thread from 2015 indicates that it's been around for quite some time. Those liking and replying to the original comment are presumably in on the joke and going along with it.

I'm unaware of anyone who actually, sincerely believes that hand-holding should be censored.

Not the answer you're looking for? Browse other questions tagged meme censorship .

19
Why does censorship level differ between manga and anime?
13
When did people start calling "manga" as "mangos"?
21
Why are anime girls drawn without pubic hair?
7
Why do they censor vomiting in anime?
13
Why is it said that the Tsukihime anime "does not exist"?