Does the usage of katakana in manga have any specific meaning? [closed]

I don't read japanese, but I can distinguish katakana/hiragana./kanji

I've noticed that some mangas use a mixture of both. Does the usage of katakana in a primarily hiragana/kanji manga mean anything?

Most commonly katakana seen to be used for the #4. Much like how we can write in lowercase and UPPERCASE to give emphasis. Because it's sometimes difficult to feel the atmosphere when reading such emphasis is generally used in the words.

What most people don't immediate pick up is that much like reason #1, you can use katakana to emphasize foreign-sounding of a particular character speech. It's hard to transcribe a foreign accent (including some but not all verbal tics) in Japanese, but using katakana can get this idea across to the user. It's like if I were to talk to you normally, I would perhaps use a combination of hiragana and kanji, but if I were to talk to you and sound foreign, perhaps LIKE A ROBOT, I would used katakana. This so-called "technique" is used commonly in visual and written novels in Japan, not just for foreign sounding words, but also to emphasize the foreign-ness of a particular person's dialogue. 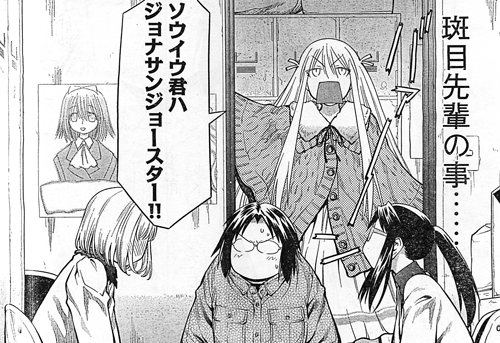 Hiragana can also be used in a similar fashion. Hiragana is typically the first reading/writing language a kid learns as they start reading in Japan. This is sometimes used to indicated the simpleness or naivety of a character, in general or at a specific moment. In the Yotsuba& manga, the titular character Yotsuba's dialogue is written in hiragana without any kanji, emphasizing her simpler, childlike manner. She also has a slightly different sized and styled typeface to emphasize her intensity and energy as a kid. In addition much of these quirks like her pun-filled nuances are lost in subsequent localizations 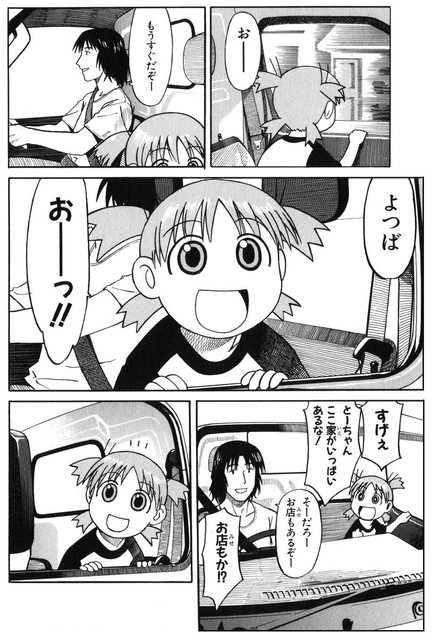 Those are the most basic nuances to look for when reading manga. If you're interested in learning more about the language and manga I recommend checking out the book Japanese the Manga Way: An Illustrated Guide to Grammar and Structure by Wayne P. Lammers.

So firstly lets talk about difference between hiragana and katakana.
I found this on a question on a site.

Katakana is mainly used for a loanword, species of animal or plant, the sound generated in the nature or by a machine and so on.

For other cases the mixture of kanji and hiragana is generally used. Using hiragana without kanji is all right, however, the mixed text is easier to understand if you gradually learn kanji.

In some cases a car is written 「クルマ」 in katakana. In this case a writer may have a kind of love to the object as much as they have to a pet animal. It is an extraordinary expression.

Hiragana is used for all kinds of japanese words.

This also gives a nice explanation on the difference between them.

You can also refer to the Japanese writing system

The main reason of why they use katakana could be that the names/words they use in the manga are non-Japanese.
Then it could be a personal decision of the mangaka himself/herself!!

Katakana is used typically for non Japanese words. Common examples include non Japanese names as well as words taken from other languages and pronounced with the Japanese syllables.

The exception to this is that Japanese first or forenames in manga may be spelled with Katakana. This doesn't happen in real life though. Various celebrities may have their names published in Katakana through out different forms of media, such as magazines, websites, etc. However, their real (non Western) name written in their birth certificate will not contain Katakana.

Sometimes, words can have both an English and Japanese version. For example, the world apple in Japanese is Ringo spelled in Hiragana. However, it is also common for Japanese people to say Apporu (sounds like the actual English word) and this is would be written in Katakana.

Not the answer you're looking for? Browse other questions tagged japanese-language or ask your own question.

5
Why is katakana used for the onomatopoeia/sounds in the background?

5
Why does Mustang address Hawkeye informally after dispatching Envy?
9
What does Ni no Kuni mean exactly?
10
Why does Bakemonogatari exclusively use katakana?
7
Does the title of Bobobo-bo bobo-bo mean anything?
13
What is the true meaning of “I want to eat your pancreas”?
5
In the Made in Abyss manga, why does Bondrewd sometimes refer to Prushka with the formal “anata” and sometimes with the intimate “kimi”?
0
Why does the text of Shino-sensei's math problems look different from normal Japanese?
1
What does “Daimadoshi” mean in “Dai no Daibouken” (Dragon Quest: The Adventure of Dai)?
6
How can 蛙 be read as あ (“a”) in Asui Tsuyu's name?