What is this dark alleyway scene from the second opening credits of Jujutsu Kaisen?

The opening credits of Jujutsu Kaisen seem to be fairly straightforward: both openings mostly contain scenes of the major characters who will appear in the forthcoming episodes.

In the second opening, there is one brief scene that I am not able to link to any of the episodes. Can someone identify what this scene represents, in particular, whether it is linked to any of the events in the anime? A screenshot is given below, followed by a description of the scene. 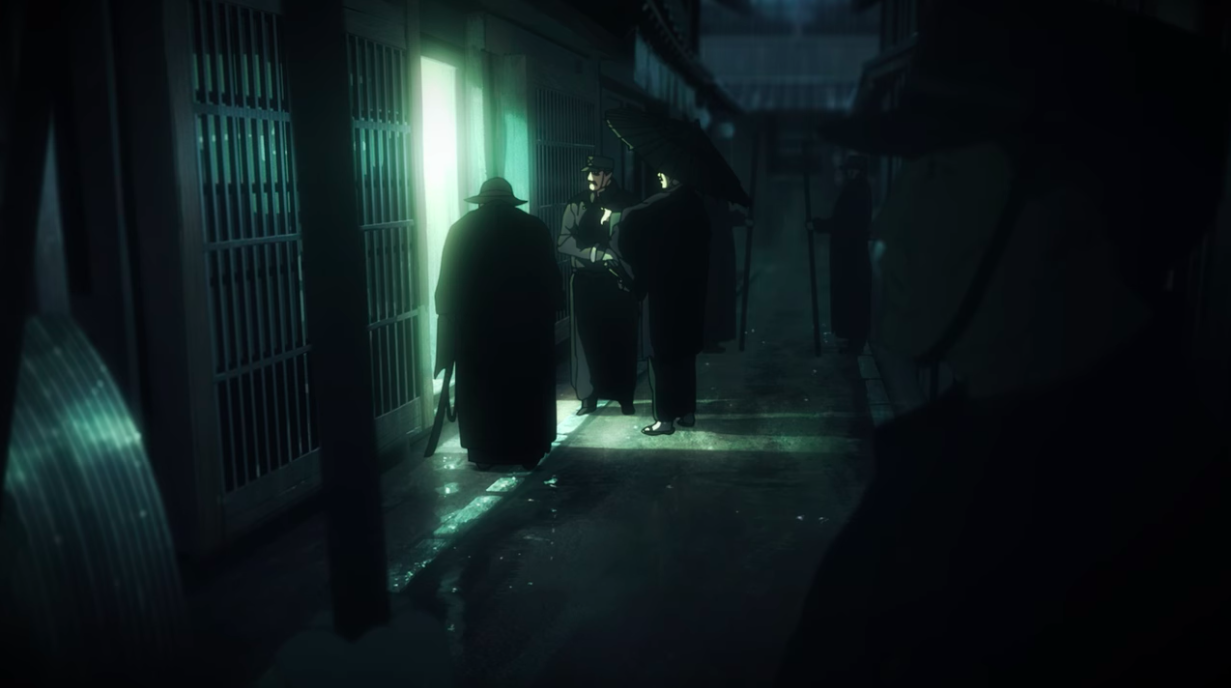 It is raining, and the scene is set in a dark alleyway. Perhaps the darkness is due to the rain, or perhaps it is night.

Three men in militaristic uniform are visible in the scene, one of them standing closest to the viewer (that is, towards one end of the alleyway), and the other two are standing furthest from the viewer and facing each other in an "attention" pose; each is holding a long stick in one hand. The guard closest to us (the viewer) is wearing a helmet with a strap going under his chin, and perhaps at least one of the guards furthest from us is also wearing such a helmet.

The prominent characters in the scene are a trio who are standing at a brightly lit entrance to some building. The entrance is to the left of the viewer.

The man in the middle of the trio is moustached, is facing the entrance and his face is partially hidden behind an umbrella; he is wearing sandals, and his left arm is stretched out in front of him, and he is possibly pointing at something.

To his right is another moustached man who is facing us and looking towards the entrance; he is also in militaristic uniform, but is presumably more senior than the guards around this building; in particular, he wears a cap instead of a helmet; his right arm is held across his middle, almost as if he is ready to draw a weapon like a pistol.

The third person appears to be an older male; his back is turned to us, and he seems to be hunched over; he is wearing a round bowl hat with a wide rim, possibly traditional, possibly in yellow color (which contrasts somewhat with the dull gray clothing of the others in the scene). It also appears that this person is carrying a sword of some kind, since the sheath is visible.

Overall, there is an air of seriousness and foreboding in this scene.

I believe the scene pictured happened in the past, and shows Past!Noritoshi Kamo doing... something, presumably related to the Cursed Wombs (since they are the focal points of the last few episodes). We can infer the scene is set in the past because of the architectural style and the soldiers' uniform. Also, Past!Noritoshi Kamo was shown in a flashback during episode 24, depicted with an umbrella hiding his forehead and scalp. The character in the opening could certainly fit with Kamo's depiction: 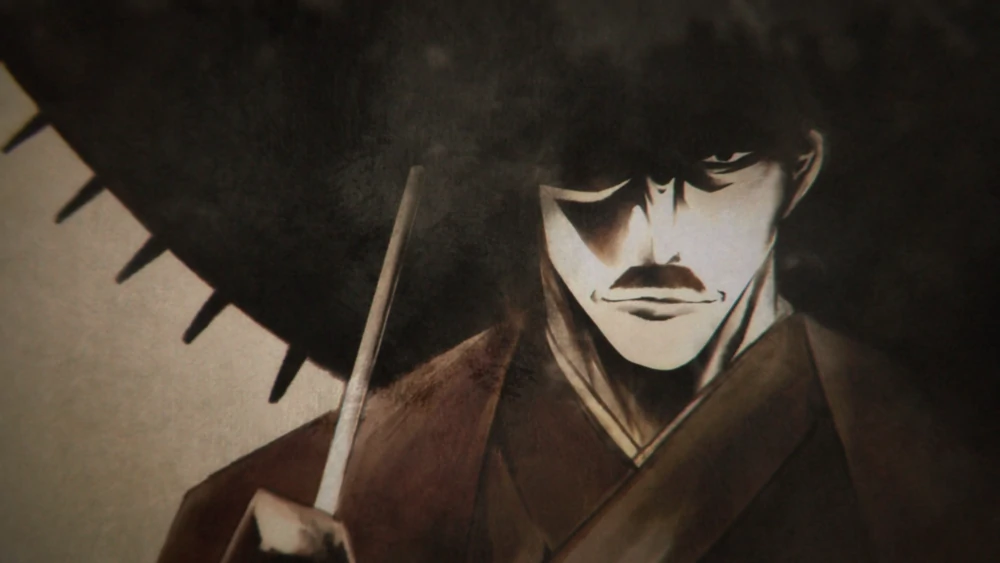 As to what is actually happening in the scene, I do not know. But it certainly is Kamo doing something related to the Cursed Wombs in his own era.

Not the answer you're looking for? Browse other questions tagged theme-song jujutsu-kaisen .

2
In the first opening of 'Jujutsu Kaisen', what does the water filling the train that Yuji is riding signify?