Are the Jupiter Sisters real?

On the TWGOK wikia, it says that the Jupiter Sisters are named after Roman gods and goddesses. Are they really a group or something? Or did Wakaki-sensei just randomly select and choose a suitable character for them? Do their traits match those of the real gods/goddesses?

And also, is this picture based on a real place? 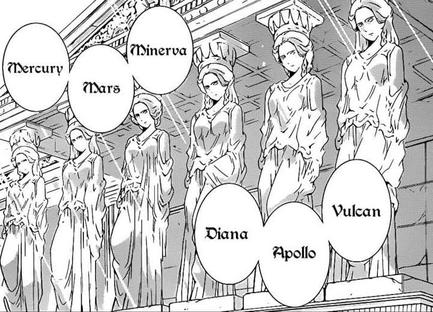 Mercury, Mars, Minerva, Diana, Apollo, and Vulcan are all Roman deities, yes. In particular, they are six of the twelve Consentes, the Roman counterparts of the twelve major Olympians of Greek myth. What's a little bit weird is that while there are six female Consentes, that set of six isn't the same as the set of six represented as the "Jupiter sisters" in TWGOK. Minerva and Diana are female in Roman legend, but the other four are male. (I suppose this is in keeping with the time-honored anime tradition of gender-bending.)

Some of the traits of the sisters described on the wiki page you linked are traits that were associated with the deities with which they share their name. For example, legendary Mars is the god of war, while TWGOK Mars is "adept at combat"; legendary Apollo cures illness in many legends, while TWGOK Apollo is "adept at healing spells"; etc.

The same wiki page you linked suggests that the picture you included in your question might be a reference to the caryatid statuary at the Erechtheion.

8
What are the differences between the original and the light novels' story of The World God Only Knows?
5
Does the Magical Star Kanon 100% spinoff fit canonically within the main series?
8
Where to get the end-of-episode pictures?
8
What did Elsie type at the first try?
4
What are the drawbacks of being possessed by a Loose Soul?
4
Does Keima's mother know Elsie and/or Haqua's real identity?
6
How many girls does the main character conquer?
6
What is the meaning behind the anime title "The World God only Knows"?