What tools are available for keeping track of manga you’re reading?

I read a lot of mangas/manhwas/manhuas (more than 150). It is really a bother to keep track of every releases: my Discord is about to explode from too many servers and I have tons of bookmarks to keep tracker of new releases on different sites. I've also used MyAnimeList, but it doesn't really help with tracking when actual new chapters come out.

Does someone know a way (app, site, or whatever) to keep track of every new release of manga?

There is actually a web app specifically for this - It's called Kenmei. It lets you not just keep a list of what you are reading, but it's specifically built to keep track of chapter releases on different sites, both official an unofficial.

You can find it here → Kenmei | Cross-site Manga Tracker

I'd say closest comparison to this site would be MangaUpdates, but Kenmei is a lot more modern and has a lot of features that MangaUpdates doesn't have (like Smart Suggestions).

But it's still in alpha, so it's not as comprehensive in terms of data, so I'd go with @Makoto recommendation as well - use MyAnimeList or Kitsu as a backup and place to find out more information, like synopsis and so on. But when it comes to just keeping up with latest releases of new chapters, I don't think there is anything better than Kenmei out there (at least on the web, there are mobile apps like Tachiyomi that does similar stuff

Here how it looks: 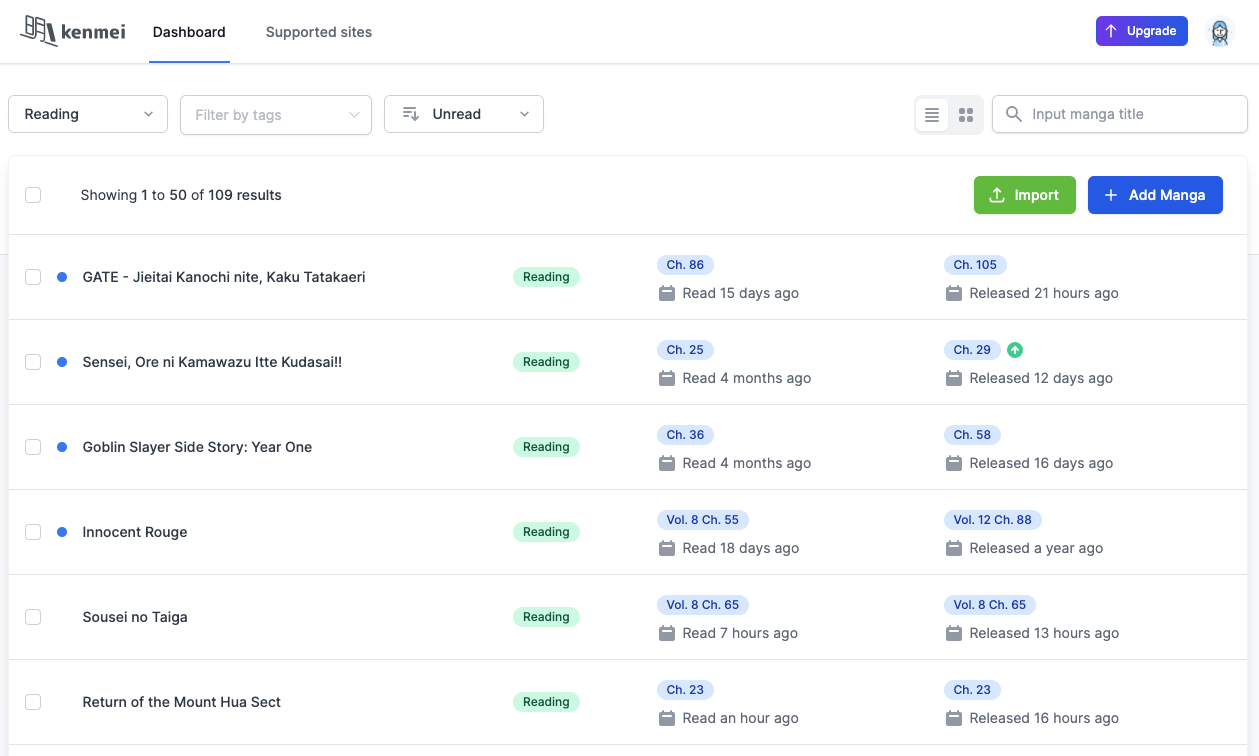 Disclosure: I am the developer for this app. After reading manga for almost 2 decades, I still felt like there was no easy and modern to use app for all the series I read. Which is why I decided to build Kenmei

you can try this extension for your browser(works with safari too) MAL Sync works with MAL, Anilist and Kitsu. It sends notification for any new release manga or anime in your list. if you're in android then you can use TachiyomiJ2K for the same feature and more(this one is only for manga though)

12
Are anime budget and worldwide gross data publicly available?
41
What databases and listing sites exist for anime, manga, etc?
9
Is there an official site for anime and manga ranking?
2
How can I see if legal anime subs are available in a certain language for streaming?
2
Are there any sources for high resolution (digital) manga?
11
Looking for manga apps which filter out mature content
5
What is a good way to keep track of the episode you're up to?
10
Apps for offline manga reading
4
Are there any numbers (estimates) for how many anime shows have been adapted from manga, light novels, visual novels, and games?