Does the Toradora OVA fit canonically in the main storyline?

I only know about the anime, so I'm basing this question on that. Toradora's anime aired in 2009. In 2011, a side story OVA was released with the Bluray collection of the series, titled "The True Meaning of Bento" (Bento no Gokui).

This side story has little to do with the main plot, so in principle it can probably go in a lot of places in the story. However, I'm wondering if there's a canonical answer for when these events occured (or if they are intended to be canon at all). I don't know if anything similar happens in the light novels or if there has been official commentary on where it falls (preliminary searches all didn't turn anything up), but either of those would be sufficient for this question.

Is this OVA canon, and if so, when in the story does it occur? 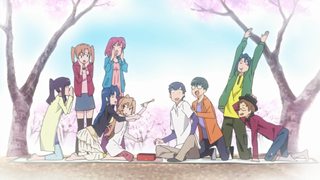 Based off my observations of the Anime i believe that the OVA is set between the end of the Culture Festival as Taiga is acting normal around Kitamura which only occurs after the culture festival, and before the student council election as not only is Minori not awkward around Ryuji or spacing out because of what Ami said to her after Taiga and Sumire's fought one another but also the end of the anime series occurs around winter and right after the elections is Christmas which in Japan is in winter.

Given that I would say the OVA occurs between the end of Episode 13 and the start of Episode 15 (as am accounting the possibility that the OVA is an event that occurred between Episode 14 and 15).

this is the first episode done for "Toradora!" in over 3 years, and the story takes place between episodes 13 and 14 of the TV Series. this episode has a comical bento battle and a heartfelt development, striking a delicious balance between the laughter and drama that "Toradora!" Is best known for.

Bellow is a photo i took of the relevant section, up the top slightly cut off is the same image as what is posted in the question 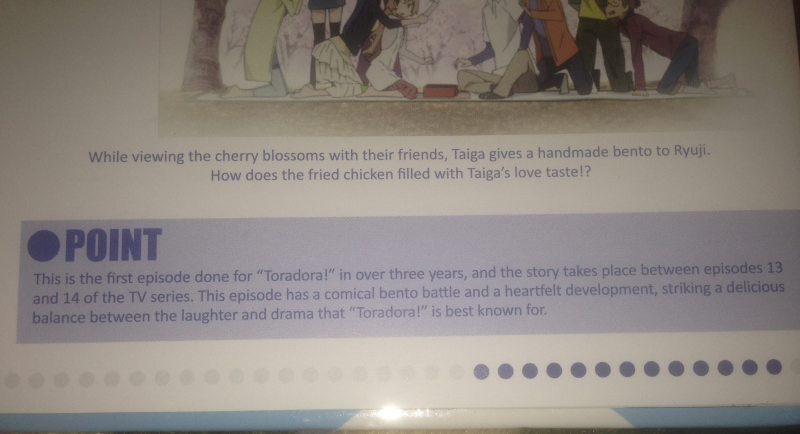 I haven't read the light novels, but the last one that came out is titled, "Toradora Spinoff 3! Ore no Bentou Mite Kure". (Roughly translated as 'Behold my Bento')

I don't know if this book, being a spinoff, specifically takes place anywhere in the story, but I think it would somewhere between the first and last episodes. I say this because Ryuuji is making Taiga lunch (which must be after the first episode) and because they are in school for most of the ova (which must be before Taiga leaves in the last episode). However, the last scene seems to fit better after the final episode, as feeding food to someone is a very 'couple' thing to do.

I haven't read the light novel, but I think the OVA is seen as a flashback that happens between the 4th and last episode (since near the end Taiga says he taught her how to cook and it shows a scene from episode 4). So it begins with Taiga cooking (for the picnic), cuts to the flashback, and ends with them having the picnic, which I think is set after the events of the anime, because of how Taiga is shown feeding Ryuuji.

Thought i'd throw in my two cents based on a previous answer that a poster gave stating that the OVA takes place between episodes 13 & 14, I wanted to add that there is further evidence to support this just by looking at their uniforms. Recalling back to episode 13, that was the last episode they wore their summer uniforms, and episode 14 was the first episode back in their winter uniforms. Now i'm not entirely sure though about the picnic part at the very end of the episode. It does seem plausible that most of the episode could be a flashback and the ending taking place after episode 25 given the way Taiga feeds Ryuuji ^-^

This takes place after the original storyline. If you watched past the credits, you will see that Taiga returns.

Not the answer you're looking for? Browse other questions tagged toradora or ask your own question.

5
Does the Toradora Anime end at the same point as the Manga/Light Novel?
5
What does the pink note left by Taiga say?
10
Is there some source as to what Taiga did during the skipped year in the last episode of Toradora?
2
How many chapters does the Toradora! manga have so far?
1
Where does the phrase ecchi sketchy one touchy come from?