Why does Zoro always forget his sense of direction?

Every single direction given to him by anyone gets puzzled in his mind and he gets lost in the end. He gets lost even when someone simply tells him to go straight. Why is Zoro's sense of direction so poor to the point of being ridiculous? Is there an in-universe explanation?

At the end of the Dressrosa arc if you guys remember, Zoro was even mocked by Trafalgar D Law for getting lost when going a short distance away. so, Law was forced to move him with his ROOM ability. Zoro himself looked very embarrassed at that time when Law mocked him.

There is no in-universe explanation. This is just a character trait that Oda gave him for ... some reason. Maybe there's an explanation on in SBS.

Can't say on if it's cannon or not, but in one of the video games, there was a conversation between Zoro and Nami where Zoro said that he uses clouds as landmarks.

In the beginning of the show, they showed kid Zoro using his sense of direction, so it must have been something like hitting his head as a kid or being hung on a cross by some marine captain for a few days.

His lack of directional sense could possibly be as a result of the cursed sword that he wields: Sandai Kitetsu. 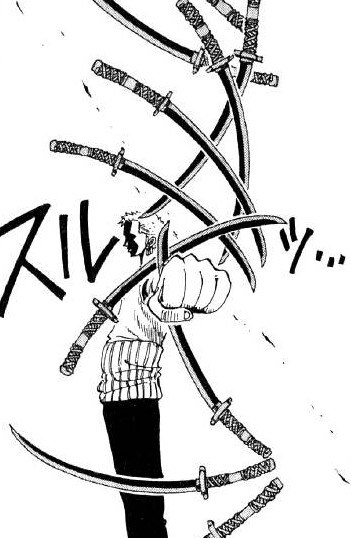 Although zoro was able to proove that his luck was capable to warding of the curse, by gambitting his arm, its likely that whatever impact that the swords curse brings upon him is most likely partial active and comedic (although it could be more sinister and be connected to his sealed eyes).

8
How does Zoro speak with a sword in his mouth?
11
Why does Shanks sacrifice his arm to save Luffy?
14
Why can't Zoro cut Seastone?
4
What book (bible) does Kuma always hold?
18
Why does Ace's tattoo on his right arm say "ASCE"?
2
Why didn't Zoro use his Bandana in dressrosa arc?
13
Why didn't Luffy and Zoro fight back against Bellamy in Mock Town?
8
Has Zoro ever called Sanji by his name?
9
Does Zoro still have his ankle scars from Little Garden?