When will the airing of Fairy Tail episode 176 begin?

Will the series be aired again? If yes then when?

Yes, it is definitely starting. It was on a hault because the anime had nearly caught up with the manga.
It will be coming anytime in 2014.
The dates hasn't been revealed yet.
This article from Crunchyroll has information about the return.

So Fairy Tail is definitely returning with advanced animation and some more suspense :P
----UPDATE----

This year's 13th issue of Kodansha's Weekly Shōnen Magazine announced on Wednesday that the new anime adaptation of Hiro Mashima's manga Fairy Tail will premiere in Japan on April 5. New episodes will air on 6 TV Tokyo networks every Saturday at 10:30 a.m. Source

Since yesterday (2013-12-28) when the newest chapter in the manga was released, there was apparently a page which indicated that the anime will start airing again in April 2014. [Source] 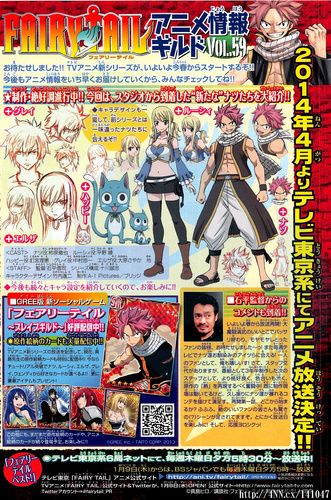 8
Which episodes of Fairy Tail are anime-exclusive?
5
Job request in Fairy Tail untouched for hundreds of episodes
3
When will Fairy Tail (2014) be dubbed?
7
Why are Fairy Tail and Fairy Tail: 100 Years Quest separate series?
0
Which Fairy Tail episode did Lucy do a map of everybody in Fairy Tail?