Rem warned Light not to hurt Misa or it would kill Light by writing his name in it's Deathnote, but Ryuk had mentioned in the last episode as well as before that either Ryuk would kill Light or that Light would die after living his natural lifespan. As Ryuk has to kill him, was Rem's warning a bluff?

If so, couldn't Light, being a genius, see through his bluff??

Rem warned Light, but later Misa told Rem not to harm him, that she would rather die first. So Rem, in order to preserve Misa's happiness,couldn't kill him.

Light, being a genius, learned how to take advantage of the situation, and used Rem on his plans, manipulating her like any other.

If you try to harm this girl, I will write your name in my note and kill you. 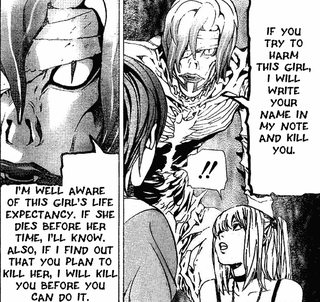 Six months after Rem threatens Light, the killing spree has begun again as soon as Misa was released. Because of this L assumes correctly that Misa is the second killer. Rem knows that if she doesn't take action Misa will be killed soon and she also realizes that this is exactly what Light had planned. Therefore she considers killing Light as she had stated six months earlier, but by now she realizes she can't kill him. Her statement wasn't a bluff, she just realizes that there would be no point on killing Light. On the contrary, and I quote:

With this, killing Yagami Light means nothing. Misa cannot be saved.. More than that, Misa will be lost as an ally and I will be driven more quickly into a corner... No. I already know that if Yagami Light dies, then Misa will lose all will to live. Yagami Light is already a human who is in many ways, necessary for Misa to continue living... 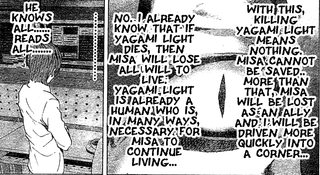 Rem had played her cards well, but Light played better. He had completely manipulated the situation, resulting in the death of a Death God. If Rem wanted to save Misa, she had to kill L and had to do so quickly. As much as she might have hated Light, killing him would result in the complete opposite of what she wanted and would make her death an utterly useless sacrifice.

There is a rule in How To Read 13 that states "Only a God of Death that has passed on their Death Note to a human is able to kill the owner of the Death Note." This means that Rem could only kill Light if he was the owner her second Death Note. It was either a bluff or a mistake. Rule 34 item 3:

After seeing no one answered what is clear to my eyes and is so simple, the answer is so simple though no one here noticed ><

When you follow the events in the anime/manga, this isn't really a question: 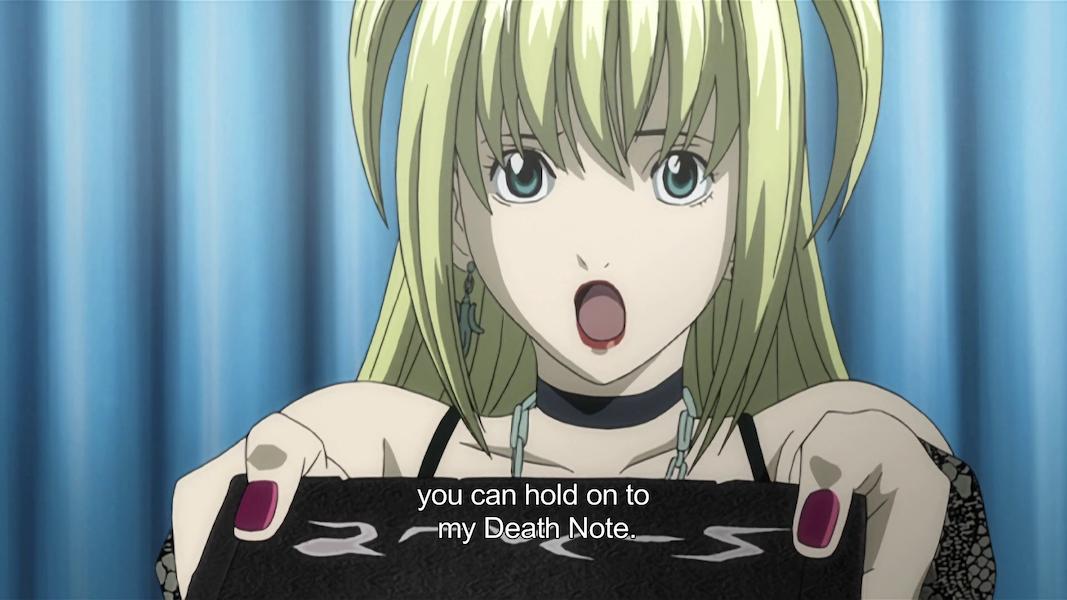 3 - While being confined by L, Misa is forfeiting her Death Note that Light's holds at the moment, making Light the owner of the notebook. 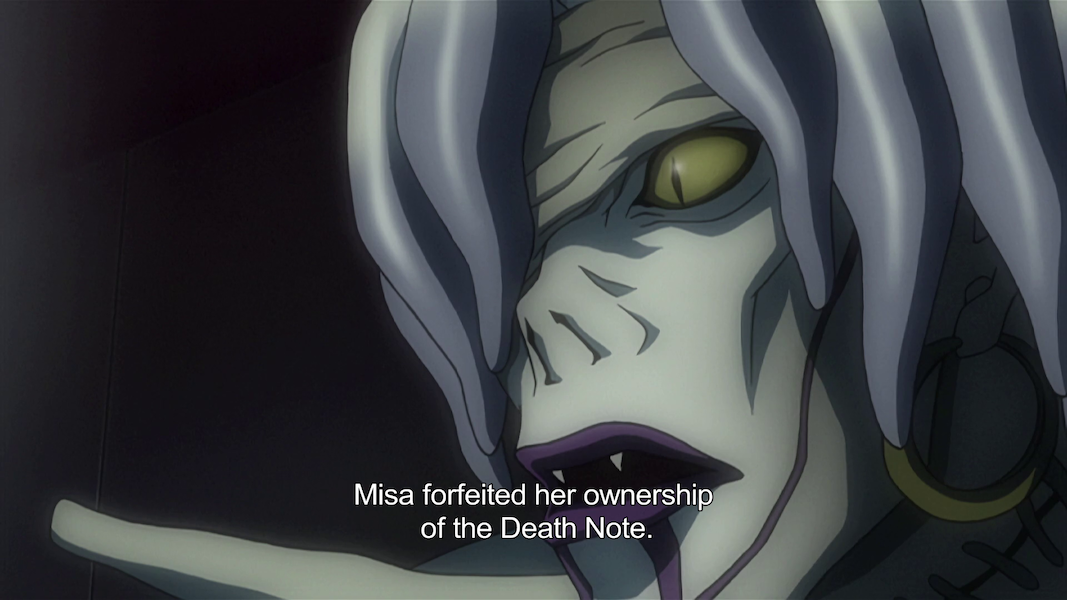 4 - Light is giving Rem's notebook to give it to Ryuk and then burry it for Misa, because that notebook was in use by Misa, so after Light's memories back she would touch that Death Note and her memories will return. 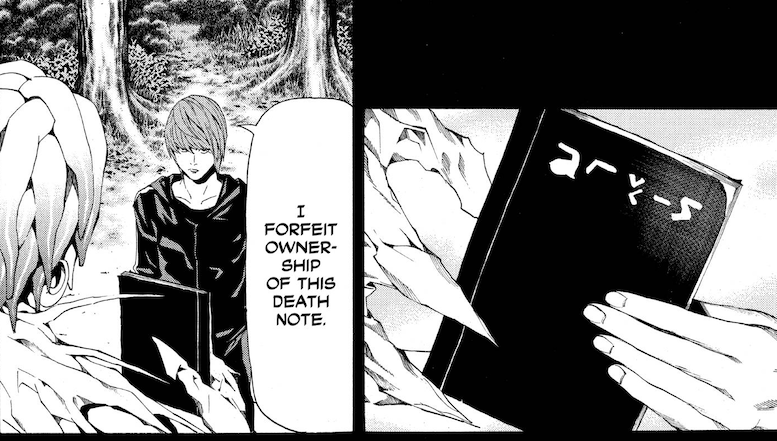 5 - After Higuchi's death, Light telling her to go dig the buried Death Note so her memories will return. Only now her original Death Note returns to her possession. 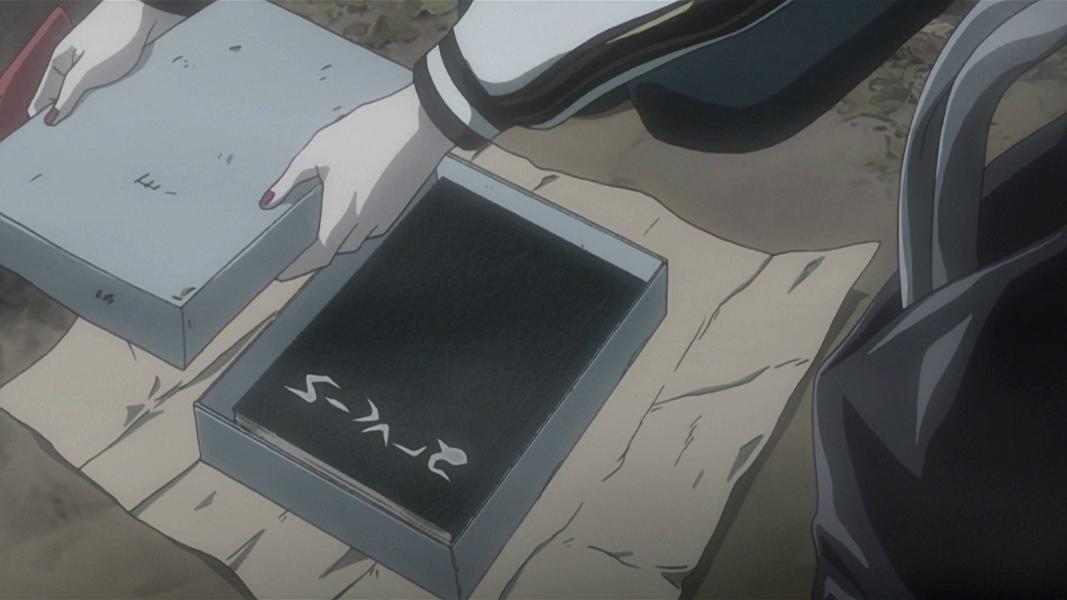 Let's now review the threat from Rem to Light:

In ep14 when Light threaten Misa he will kill him she's telling him - "I won't let you do it Yagami Light, If you will kill this girl I will write your name in the notebook and kill you. I can see her lifespan. If she'll be killed before her end I will think that you are the killer."

Now, as other specified there's this rule:

How to use XXXIV

What that has to do with here? Well, as I explained Misa borrowed Light the Death Note that Rem gave to her, Rem clearly specified that if she'll be dead before her lifespan will be over - she'll kill Light, as Light is now the holder of the Death Note he will be the owner of it after killing Misa and since the Death Note used to be Rem's notebook she'll have the same power as Ryuk has to kill him since she passed the Death Note to Missa, though Rem didn't gave it to Light since Missa only borrowed it to him it's still considered Rem's old Death Note and to her to kill him. So the answer is clear that her threat was real and the things really simple and clear.

Though you could go and say it isn't true since in the end Rem hasn't gave it to him, though to be foolish claim, the evidence for that is the need for Light to give Rem the Death Note when forfeiting it because she also needs to follow Light for using the Death Note, her former ownership of the Death Note didn't stopped when Missa borrowed it to Light 'till he forfeited it.

As for other places as mentioned in this Q&A, Rem could kill Light after he killed higuchi since Rem gave Higuchi Ryuk's former Death Note since she's the shinigami of that Death Note now, now Light is again own Rem's Death Note she's able to kill him since he gained ownership of the notebook after holding it while killing Higuchi so Light considered the ownership of that notebook.

In How to Read XXXIV, the third point reads,

5
Why was Ryuk tied to Light's Death Note?
8
How did Ryuk trick the King of Death Gods?
6
Is Ryuk the only one who can kill Light?

20
Is Misa Amane's early death a plothole in Death Note?
5
Why was Ryuk tied to Light's Death Note?
12
What was L's real name?
2
If a Death Note user specifies, along with the actual target, the name of a person whose face the user doesn't know, will that person live?
19
How old was L in the Death Note series?
2
Could one make a specific person shoot someone dead using the deathnote?
14
Is Ryuk required to write Misa's name in his Death Note at the end of her life?
4
Why was Light only targeting Japanese criminals when he was in the US?
2
Was Light actually a friend to L?