Difference between the 2 'true love' that Kaguya says

In the pilot/premiere (specifically Kaguya Wants to be Stopped, ch12 of the manga), Kaguya calls 'true love' as 真実の恋 (I think shinjitsu no koi しんじつのこい). 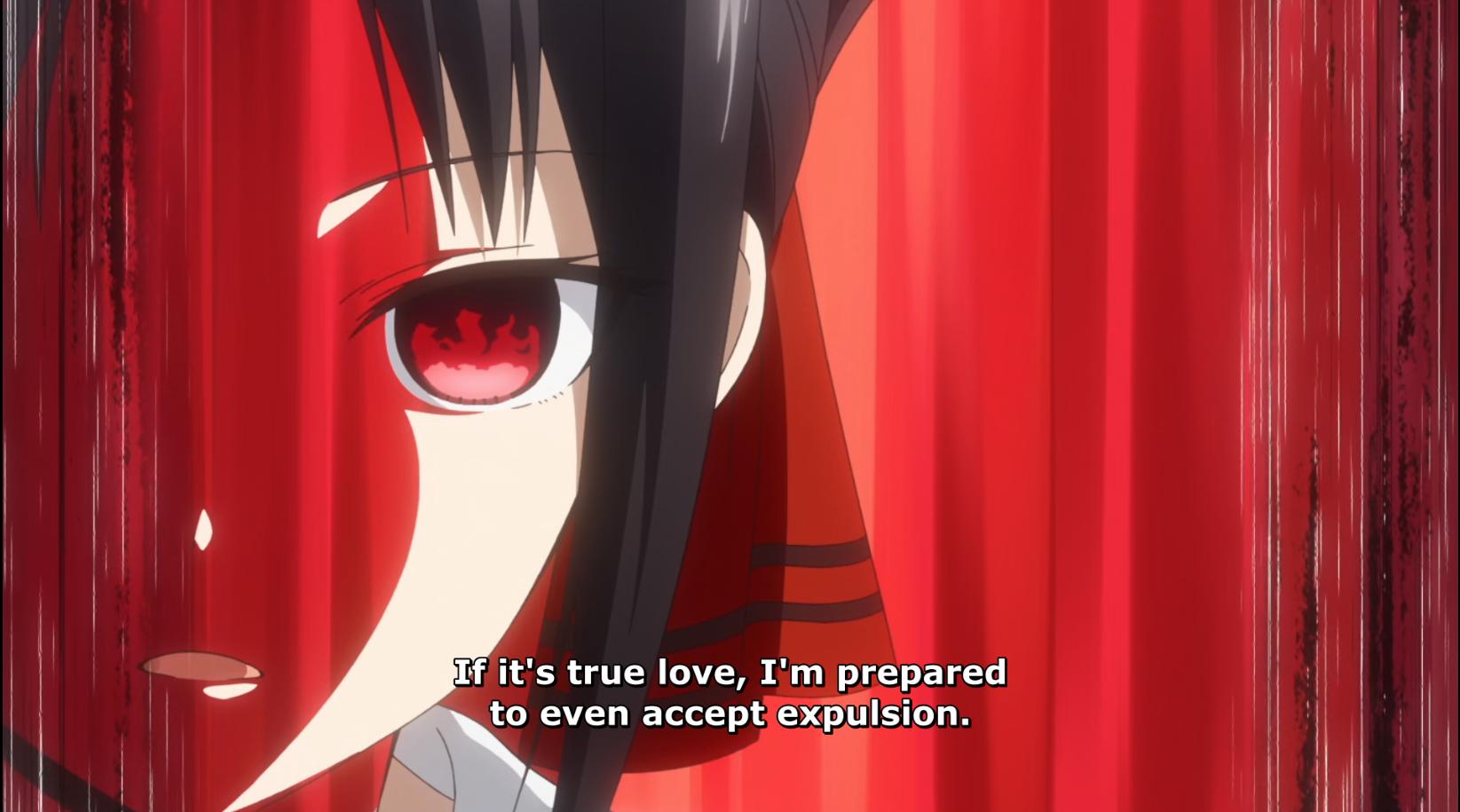 Later in the sleep-deprived fetish episode (in S02E05) Kaguya calls 'true love' as 本物の愛 (I think honmono no ai and ほんもののあい). The narrator also calls this 'true love' (in katakana トウルーラブ) and 'eternal love'. 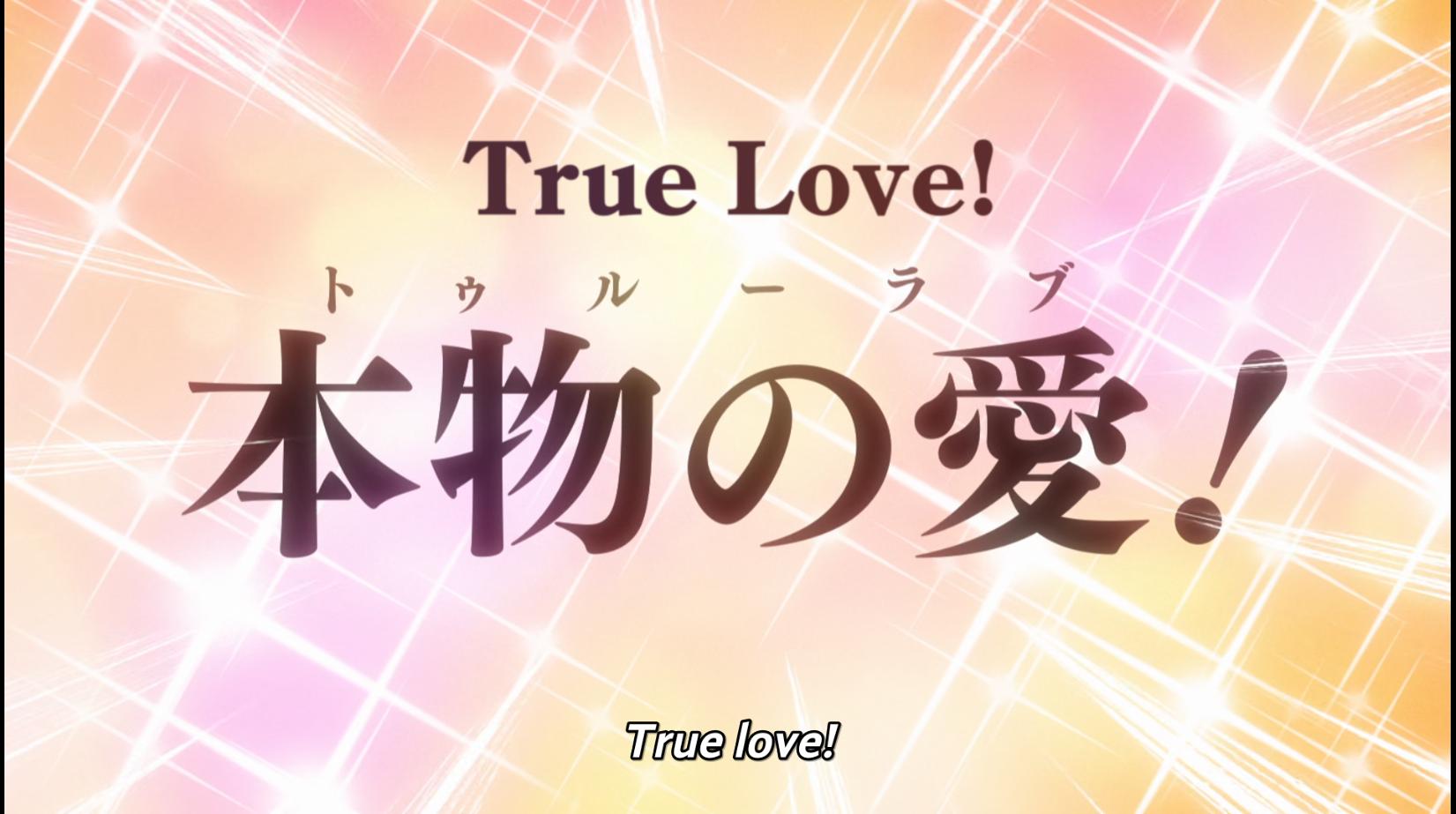 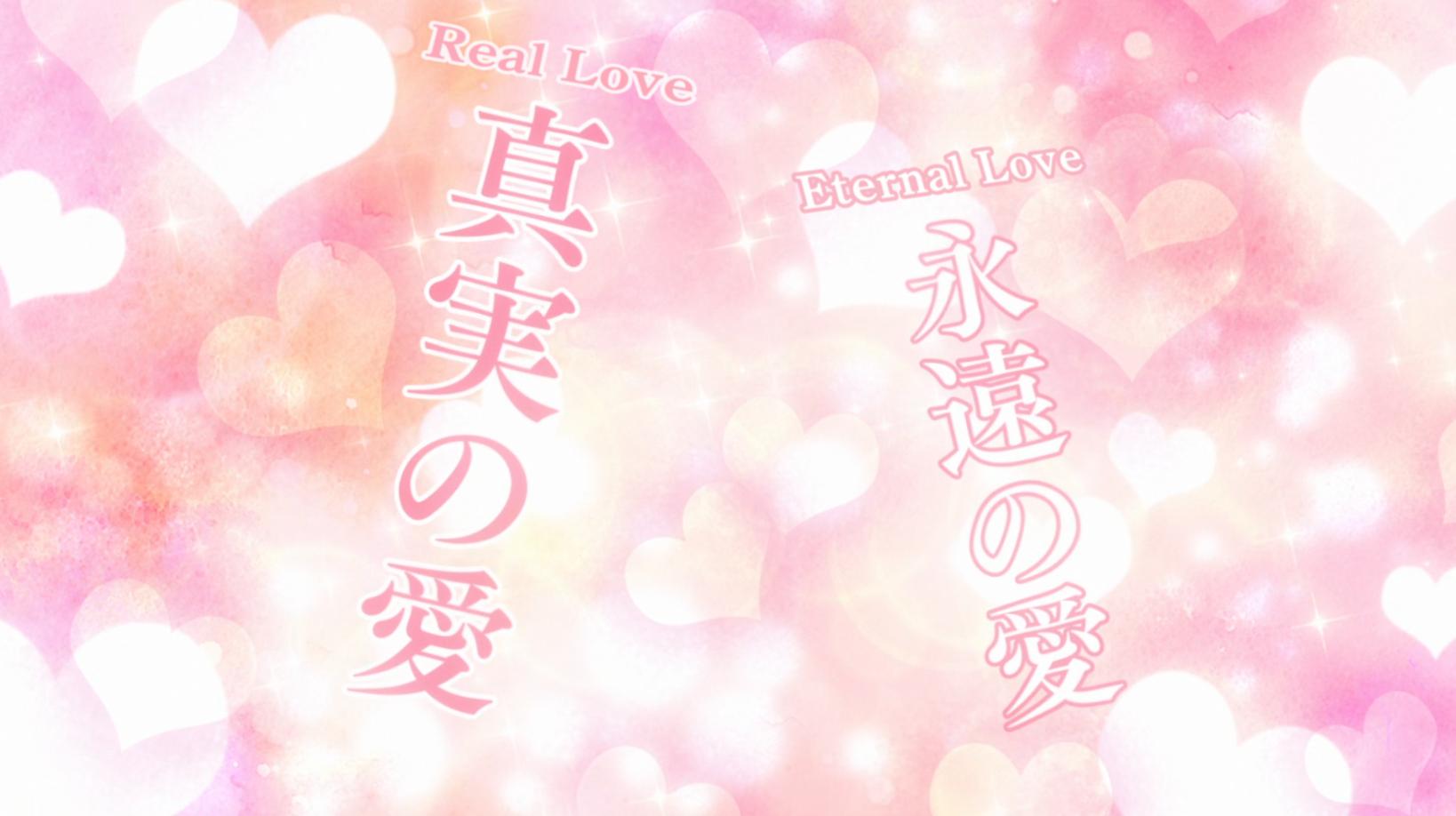 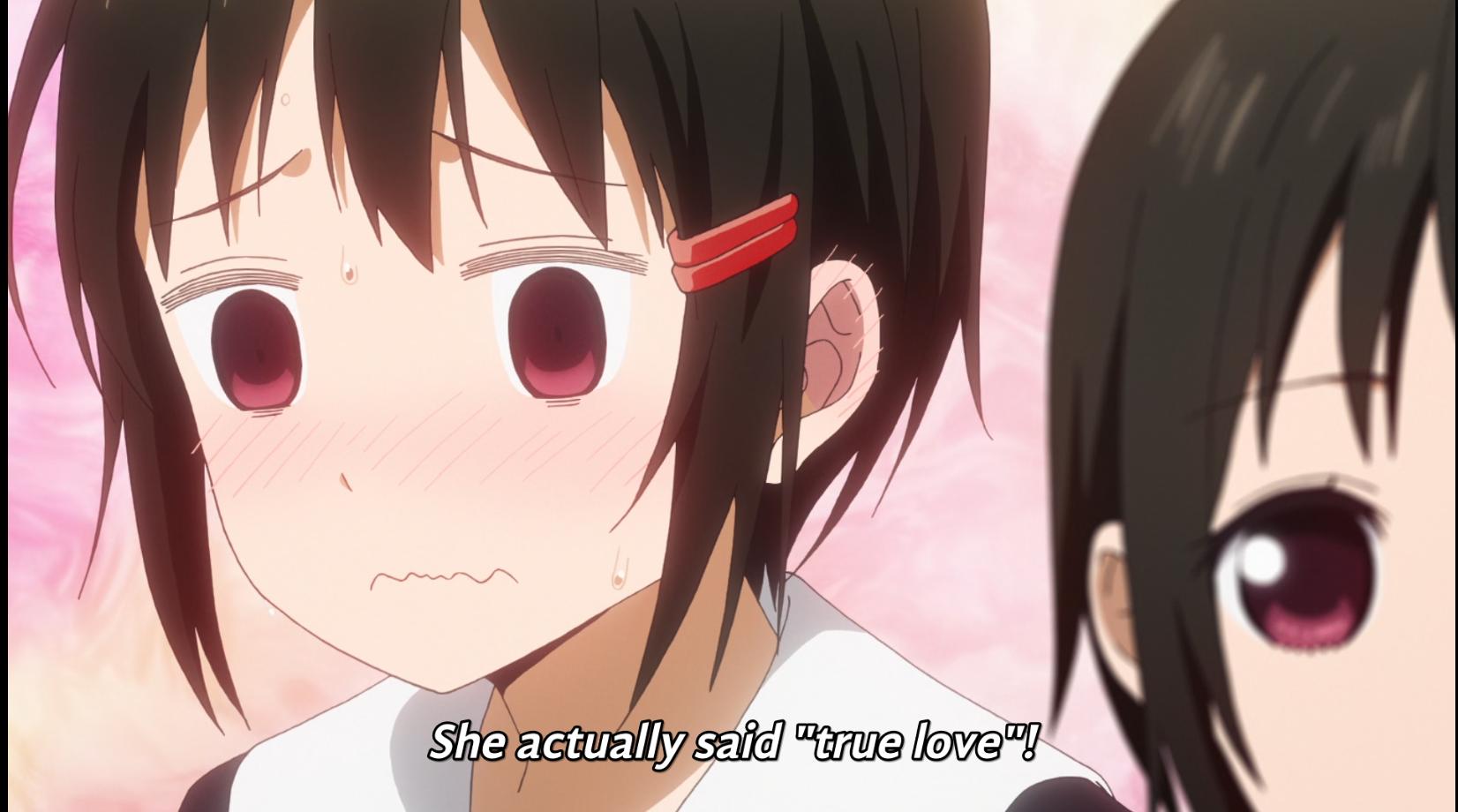 Chika says 'Aren't you a little too old for that?' 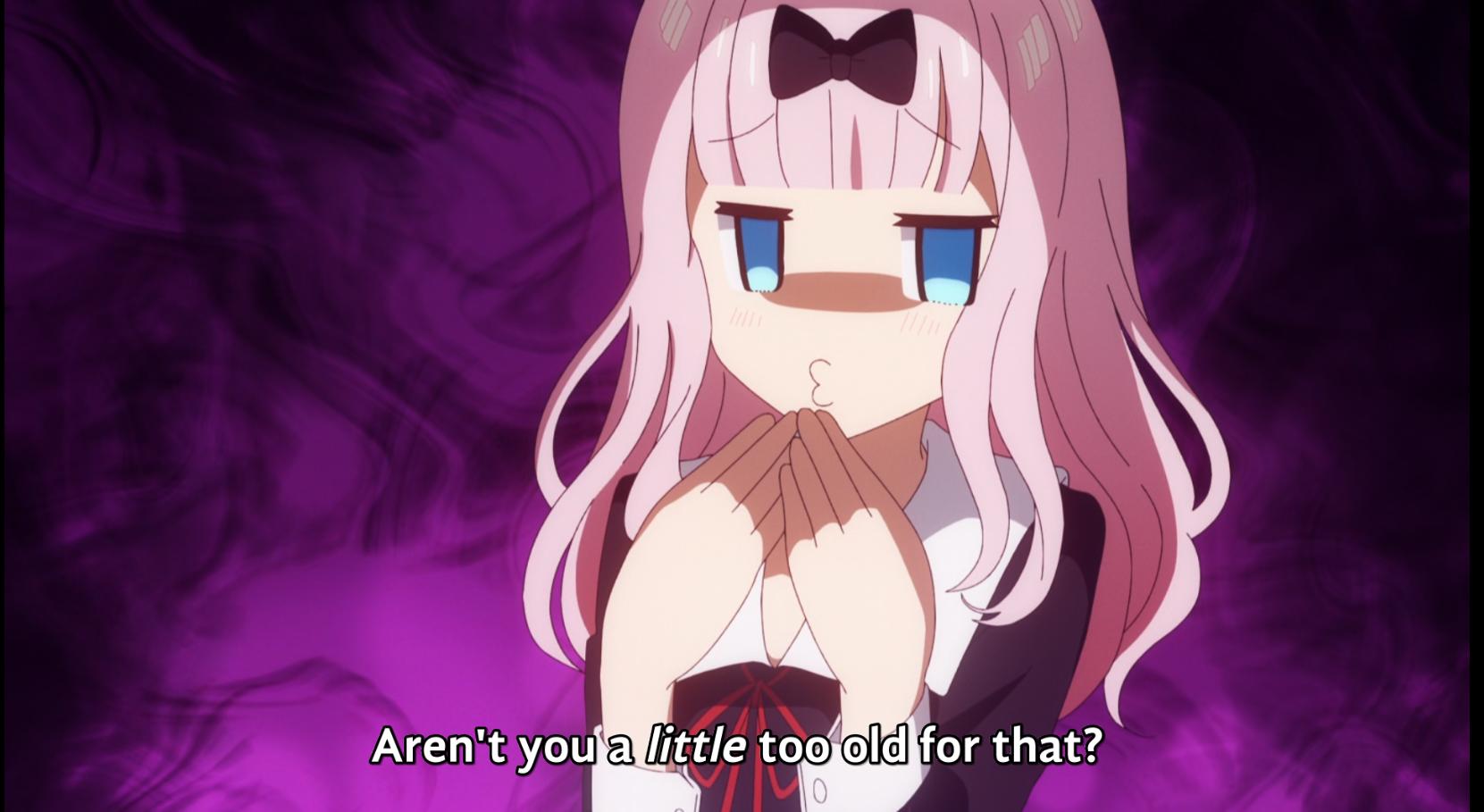 What I got so far:

First off, I think that the translation 'true love' is used for both simply because it is more natural as English, as the following n-gram shows. 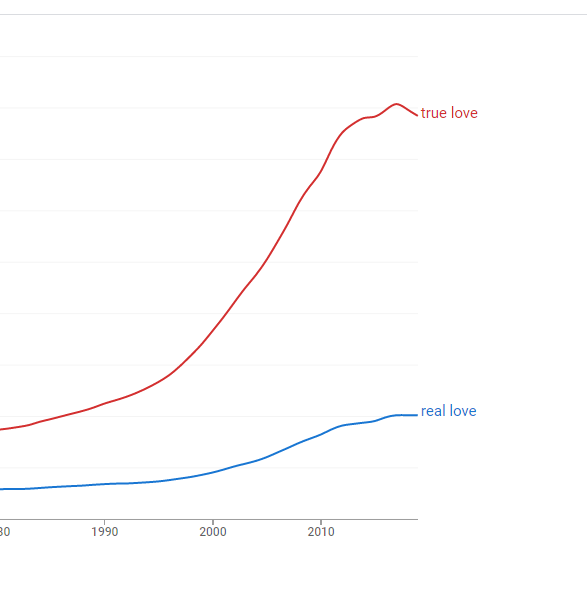 So practically they are used synonymously here.

Now why the girl blushes is something to do with Japanese mentality. Generally people do not talk about love directly and also 本物の愛 sounds too serious to talk about. It sounds naive as well. A natural response would be laughing as Fujiwara does. The girl is too polite to do that, and feels awkward.

Note in the manga version, right after the girl's blushing, there is a narration: (かぐやは)このワードが口に出すだけで恥ずかしいものであることを認識すらしていない. (Kaguya does not even realize this word is something too awkward to utter, where this word refers to 'true love').

Not the answer you're looking for? Browse other questions tagged japanese-language kaguya-sama-love-is-war .

1
Why does Chika care about Kaguya's date in the pilot/premiere?

9
What is the difference between "arc", "hen" and "season" when categorizing anime series sub-stories?
7
What is the kanji on the fan that Kaguya gives to Shirogane in season 2 episode 2?
5
Is this a COVID-19 reference in Kaguya-sama: Love Is War season 2?
2
What does 'konnichi sappo' mean in episode 8 of Kaguya-sama: Love Is War?
4
Why does the narrator call Kaguya by 1st name but everyone else by either last name or full name?
0
Kaguya s1 finale - What happens between fireworks and next semester?
1
Relationship between Kaguya and Yu Ishigami?