Why does a crescent moon appear on Chibi-Usa's forehead?

In Episode 60 "Angel or Devil? The Mysterious Girl from the Sky" and episode 64 "In Search of the Silver Crystal: Chibi-Usa's Secret", I noticed a crescent moon appears on Chibi-Usa's forehead when she gets upset (i.e. Usagi giving her a spanking (episode 60) or her fear of thunder and lightning (episode 64)), followed by a streak of yellow light into the sky. Does anyone know why this happens?

these are the Planetary Symbols which as the crystal wiki indicates

would appear on their forehead when they awakened to their true destiny as Sailor Senshi, or when they performed feats of great power.

in the original anime when the Sailor Senshi were attacked their symbols would appear which helped Luna identify that they were the reincarnation of that Guardian, this would be the "awakened to their true destiny", eg. when Garoben tried to force Ami to watch the brainwashing

in the original anime you'd see Usagi's when she transforms just before her tiara manifests. while the rest of the Senshi don't show that in the original, in Crystal they do the same as Usagi

Chibi-Usa's case would all under "feats of great power" given how when she unleashes her power during the Black Moon Arc it is generally picked up as being a huge power spike that draws everyone's attention and/or protects Chibi-Usa when she's in danger. one could see the Senshi's Transformation as being a sort of regulatory system as when Usagi is able to transform properly she stops having these outbursts of power.

for the instances when Usagi had her Symbol on her forehead while in her Princess Serenity form, as the wiki also notes

Sailor Moon's planetary symbol, the golden crescent moon, was worn by all members of the Moon Kingdom

which would be the same for Chibi-Usa however different adaptations vary if she has one as in the Manga she can be seen with it while in the original anime she is shown without it. the Black Moon Clan could be seen as a sort of dark counterpart of the Senshi (or at the very least, Neo-Queen Serenity) and thus explain their up-side down Black Crescent Moon.

Chibi-usa's forehead moon has the ability to shine a yellow light, which could possibly alert Sailor Pluto to her and connect her to Crystal Tokyo to some degree, but which mainly results in giving away her location to her enemies. As a young child, she does not seem to be very street smart about keeping it secret through suppression, and it does not seem particularly useful given that she already has Luna-P for communication and a space-time key for transportation. Seeing as she does not transform into sailor soldier form in Season 2, plotwise, there is no need for it to shine in order to help Luna or anyone else realize that she could be sailor soldier material (you could interpret the function of its appearance as primarily on the meta level, to alert young viewers of the anime that Chibi-usa is part of the royal family [in case they couldn't figure that out easily enough from her flashbacks]).

Other characters who have a moon on their forehead include Luna, Artemis, and Diana, as markers that they are advisors to the Moon Kingdom royal family, and the upside down moon on the foreheads of the Black Moon clan, as markers that they are members of the clan, which promptly disappear if they reject/leave the clan. Chibi-usa's forehead moon switches to upside down when she joins the Black Moon Clan as Black Lady, and reverts back to right-side-up after she leaves it.

I'm not certain, but it's likely intended to foreshadow Chibi-Usa's transformation into Black Lady in Episode 85. Said transformation is also caused by Chibi-Usa getting upset, due to falsely believing that her parents no longer love her, and Black Lady also has a crescent mark on her forehead: 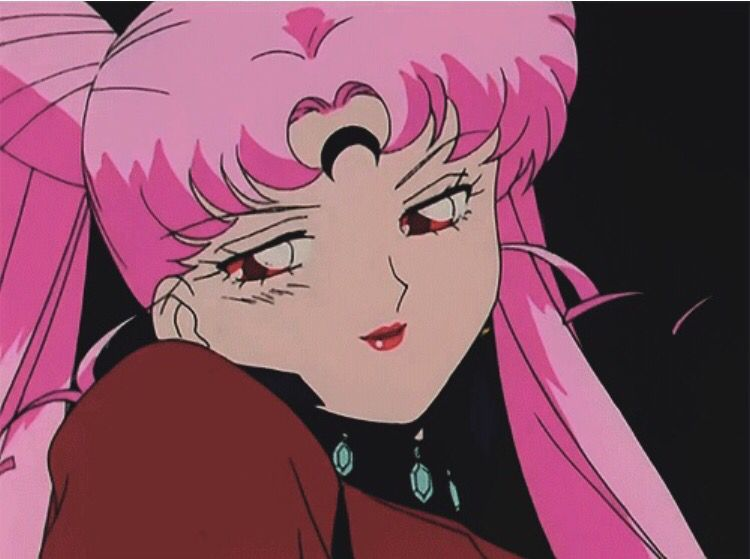 I'm not sure what the significance of the yellow streak of light could be.

Not the answer you're looking for? Browse other questions tagged sailor-moon .

11
How does the English version of Sailor Moon differ from the original?
9
Why is Sailor Moon (2014) not airing on TV?
3
Why does Sailor Moon Crystal not air weekly?
2
Does Sailor Moon Crystal contain the Black Moon arc of the manga (Pluto and Chibiusa)?
4
Why didn't Chibi-usa initially recognize Sailors Mercury, Mars, Jupiter, & Venus as her friends?
7
What are this headwing that appear after Sailor Moon/Sailor Chibi Moon transforming?
2
Why do Usagi and Chibi-Usa call Minako Mina-P?
4
Why do the different Sailor Moon "seasons" have separate names?
1
In the original Sailor Moon intro sequence, why does Luna's brief appearance not show up when she sings "neko"?