Ask Question
Asked 1 month ago
Modified 1 month ago
Viewed 146 times
-2
Closed. This question is off-topic. It is not currently accepting answers.

This question does not appear to be about anime or manga within the scope defined in the help center.

And in particular, when you play with 2 players do you deal out all the cards the from the deck? Or is there some undealt part that players draw from during the game? I mean, if you deal them all then you'll just know what's in your opponent's hand?

This is going to sound trivial, but actually it's part of this theory/hypothesis I have for this anime/manga series The Quintessential Quintuplets, where I think the game Sevens(/Fan Tan/Domino) is symbolic of something in the series (namely something to do with the number 7). My thought is that the card game Sevens (and thus the number 7) is so important that it even leads to a mistake like this. So if this were a mistake, then it's possible that Sevens is really important. Or something.

From S02E12 of The Quintessential Quintuplets 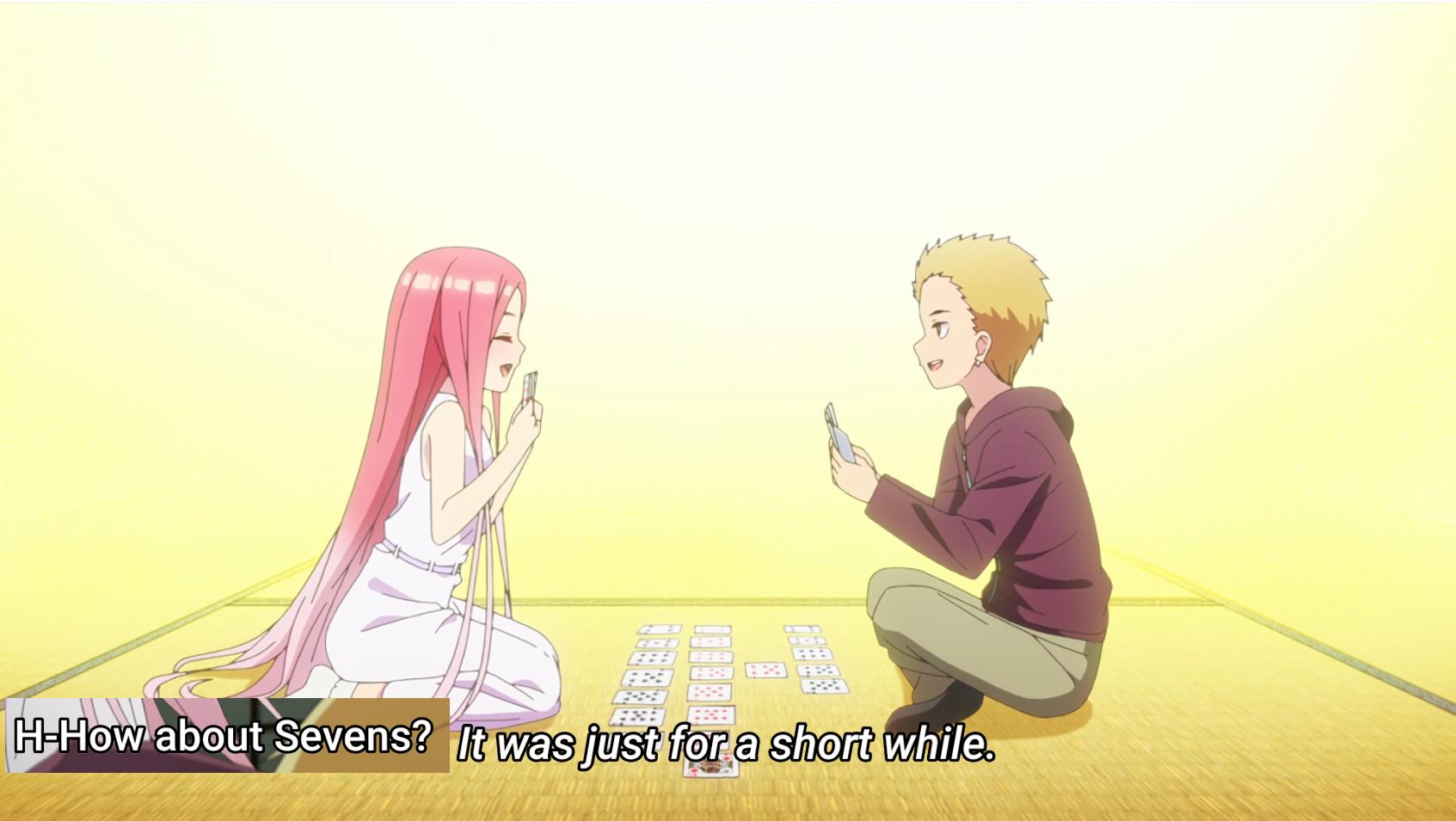 The 2 kids pictured above, a young Nakano and the young Fuutarou, are playing

You can even see how the cards are laid out that they really are playing (some variation of) Sevens.

culture japan the-quintessential-quintuplets
Share
Improve this question
edited May 21 at 12:02
BCLC
asked May 14 at 20:17

Yes, it is possible to play Shichi Narabe with only 2 players.

First of all, there is no exact requirement for the number of players, though most sites recommend at least 3 or 4 players:

Japanese Wikipedia also mentioned an optional rule for games with 2-3 players called combo, so it acknowledged that there is also a variation for 2 players.

Thus, while it is still possible to play with only 2 players, there are a few reasons why it is not really recommended. Magic Door mentioned in short that it is because both players know each other cards (because all the cards are dealt). A more thorough discussion on Yahoo! Chiebukuro (Japanese) explained further that since both players know each other cards, it is a perfect information game and the winner can already be decided since the beginning, given both players play perfectly. In the end, it becomes a game to play without mistakes instead of a game of strategy.

This game may be played with two players. It becomes less of a strategic battle and more of a time-killer.

If you trust Wikipedia as a source, the Japanese Wikipedia article says it could even be played by one player.

I can imagine playing this game alone requires the highest level of patience, strategy, tactic, and most of all a strong mentality, compared to playing against three or more players.

Not the answer you're looking for? Browse other questions tagged culture japan the-quintessential-quintuplets .

44
Why is "I won't forgive you" a commonly used threat?
7
Why do Aya and Youko consider going to a ramen shop alone so amazing?
6
Is there an 'angel dance' outside of the Shirobako anime?
10
Is it common for Japanese school kids to live alone IRL?
0
The Quintessential Quintuplets (aka 五等分の花嫁) : Is 届くんです (it reaches) a mondegreen that should be 五等分です (It's divided into five equal parts)?