I read a comment in a forum somewhere like 'I want to read the manga specifically instead of just watch the anime adaptation because I want enjoy the illustration of [insert the manga illustrator's name].'

Are they really that different in general? Please provide examples.

Based on examples from my previous questions (see here, here and here), they don't seem to be very different. I recall even like the Death Note and Bakuman manga seem to be about the same...

Sure when it comes to writing, the anime and manga can be very different like I heard for The Promised Neverland and Umineko. But art?

This questions seems way too broad and I'm not sure if it should be answered here, but I'll make some assumptions & try to clarify in a more technical way than opinion. The term art here can mean a lot of things after all.

Differentiating between anime & manga, anime is an animated medium that involves a huge staff roll to produce, and in it the main ones regarding art/animation include character designers (for the exact look they'll have in-anime), key animators, background artists, and the in-between animators. When people judge anime art/quality they can be referring to any of these areas among others. When comparing adaptations to manga they'll often be comparing character design and key animation or storyboarding (how the scene flowed). In some cases they're almost identical (more common for action/shounen adaptations coz fans expect the same thing just animated & changing things can have huge backlash) while in others the anime has a noticeably or entirely different art style (more common if the original source material wasn't a manga). 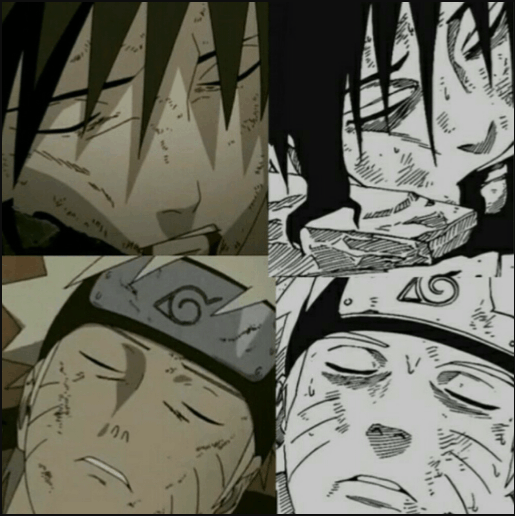 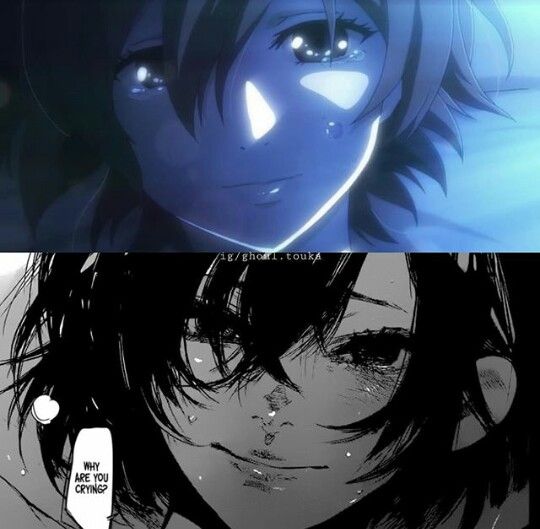 The key animators are usually responsible for the impact of key scenes that e.g. the reader of the manga would be excited to see animated, them usually being the only well known names on the artist credit list.

Manga on the other hand is largely made by a single artist (sometimes with a few assistants) who may or may not be the author, and their art refers not only to how they draw pictures but also their panels & page composition. This creates a certain tone and flow to those scenes that can sometimes differ a lot in adaptations.

Since manga is mostly static images across maybe two dozen pages artists have more freedom to add a lot of detail to each illustration or character design compared to the 7000+ frames needed for an anime episode. This isn't necessarily common but many manga artists are known for their insane level of detail for everything from vast background landscapes to impactful character poses & environment destruction the likes of which only a few anime studios have the capacity for animating. Others might have a unique visual style that utilizes the monochrome ink style of manga pages. For animated adaptations these character designs and environment details will often be simplified or changed to suit the colourful animated medium. 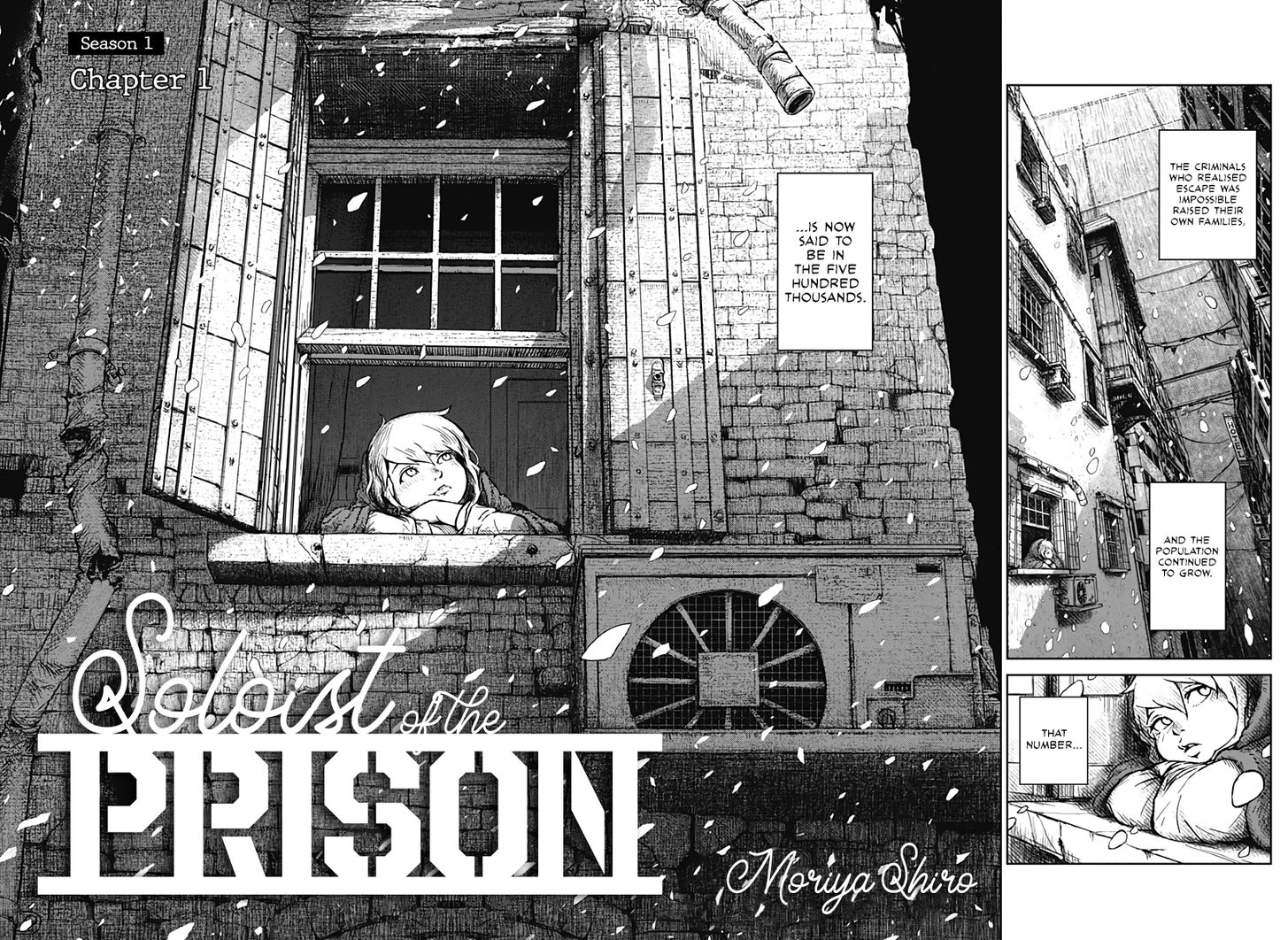 Soloist of the Prison 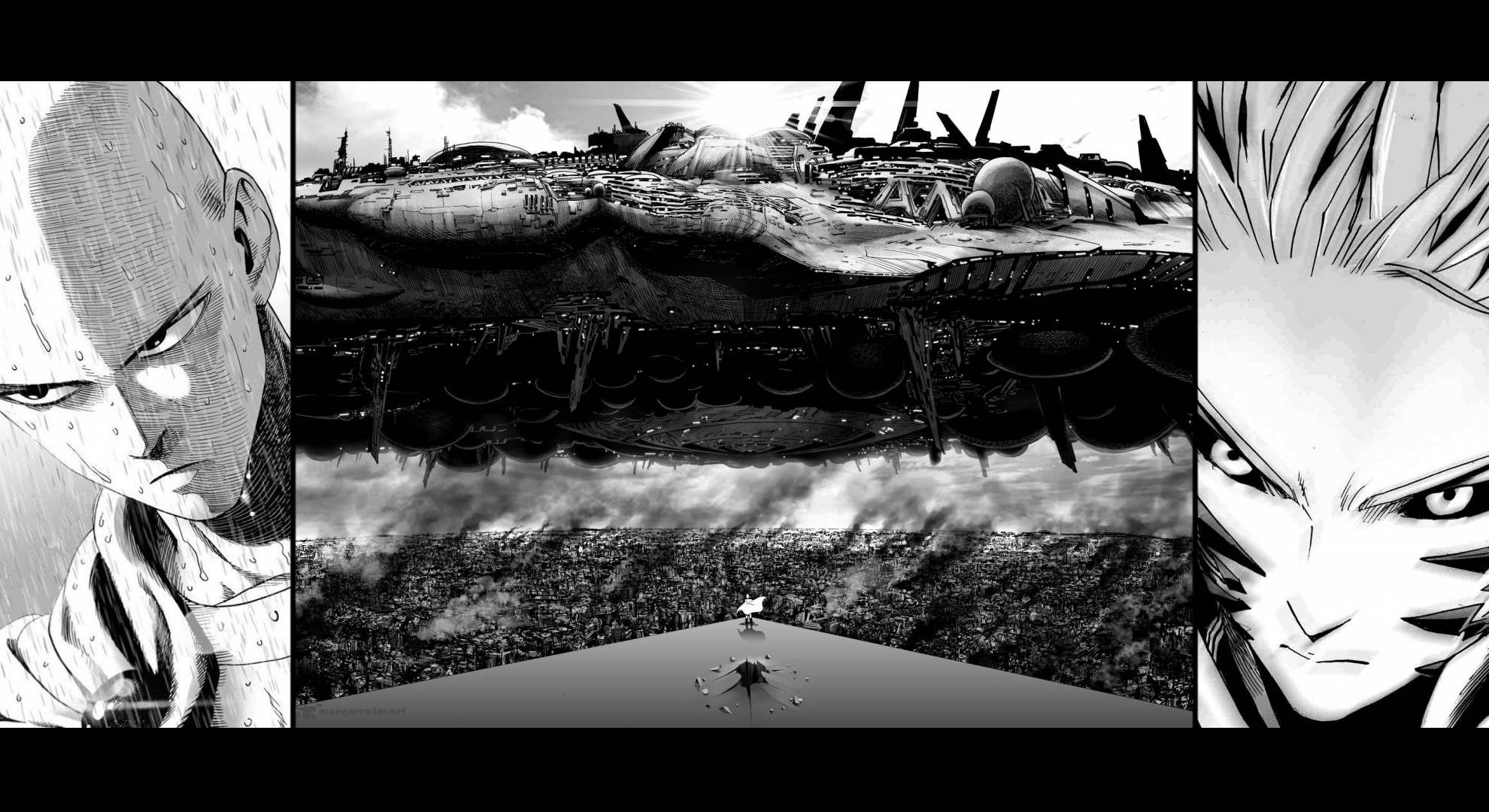 There are basically an infinite number of styles & techniques (anyone can make one) but there are standard ones for different mediums. Since manga is static monochrome images artists often use ink shading techniques like crosshatching and line techniques that give the image texture rarely ever seen in the usually flat cell-shaded anime art, and it also usually looks more dynamic. In anime the primary method of shading is picking a primary tone, then a shadow tone and maybe a highlight tone and filling in the lineart. The simplicity is often better for clarity & smoothness when things are moving around (you'll notice most anime movies have simpler shading than anime but better animation) but makes lots of anime look the same. 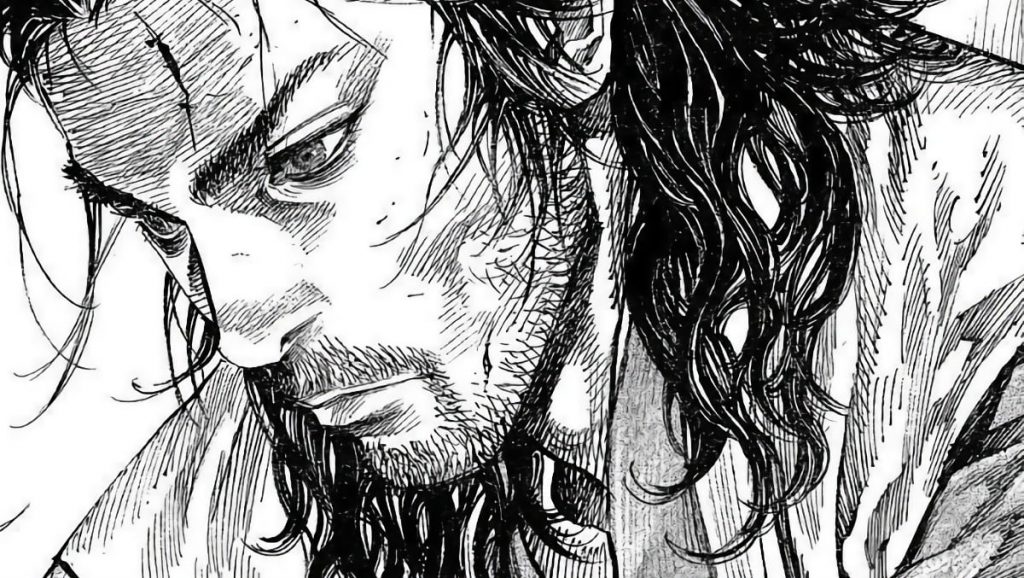 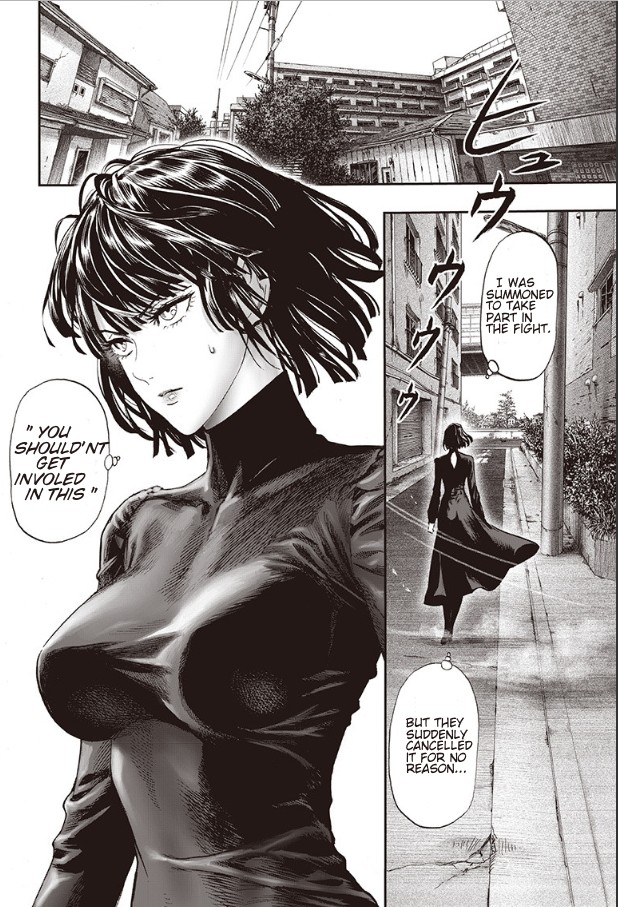 Maybe the biggest piece of the puzzle for some is the fundamental difference between the mediums which is in how they visually tell a story. Anime being in video format the visual narrative largely depends on the storyboarding and editing, where a shot can be stretch or cut short depending on how impactful or significant it can is (worth the screen time?) and how much clarity is needed for the viewers to follow it. In manga the main point of creativity is in how panels are arranged on the page, the most creative authors have few barriers in how they can use it and it's a pretty unique experience to manga as far as I've seen 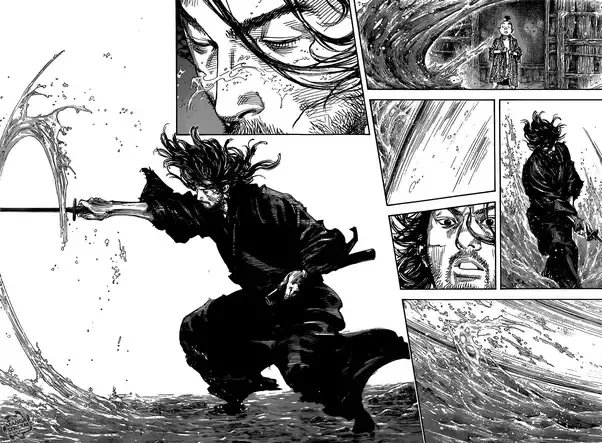 This is often where the genius of a manga author lies, and I think it's also what's lost in translation the most in adaptations as they have different tools to work with. Manga manipulates space. Anime manipulates time. The artwork is more important in manga.

Mind you this isn't an anime or manga is better kinda subject IMO, manga has very little to work with and is a fiercely competitive industry so of course the top manga will have to have top-class art to get attention and then the story/narrative to attract readers. Anime has a lot more avenues to be appealing and different studios/teams excel at different things. And when you're a fan of a certain artist you just love to see any work from them which is enough reason to go for a manga. Most of it is preference but if you're e.g. an art fanatic you'd go for the medium that focuses on artwork and vice versa for animation fanatics, or both.

As someone who just enjoys art, one of my fave things about manga is the freedom to look at any particular moment as much as you want. You control the pacing and when you turn the page and find a very impactful image you can just breath it in which increases the impact, while in anime it controls the pacing.

Was hoping to keep it shorter but alas

And sometimes the anime is just a very cheaply made weekly product on a cash cow franchise, like One Piece, where you will notice that the Manga has just a much higher quality than the anime, especially in the later (700+) episodes. This is both because the mangaka got better at his job and Toei not really bothering anymore, since it's already popular anyway.

Either way, if the mangaka had any type of unique style, that is usually lost when translated to anime, unless the art direction makes an effort to stay true to the original.

It's a joke image and the original of Youjo Senki is the Light Novel, but here you have your picture: 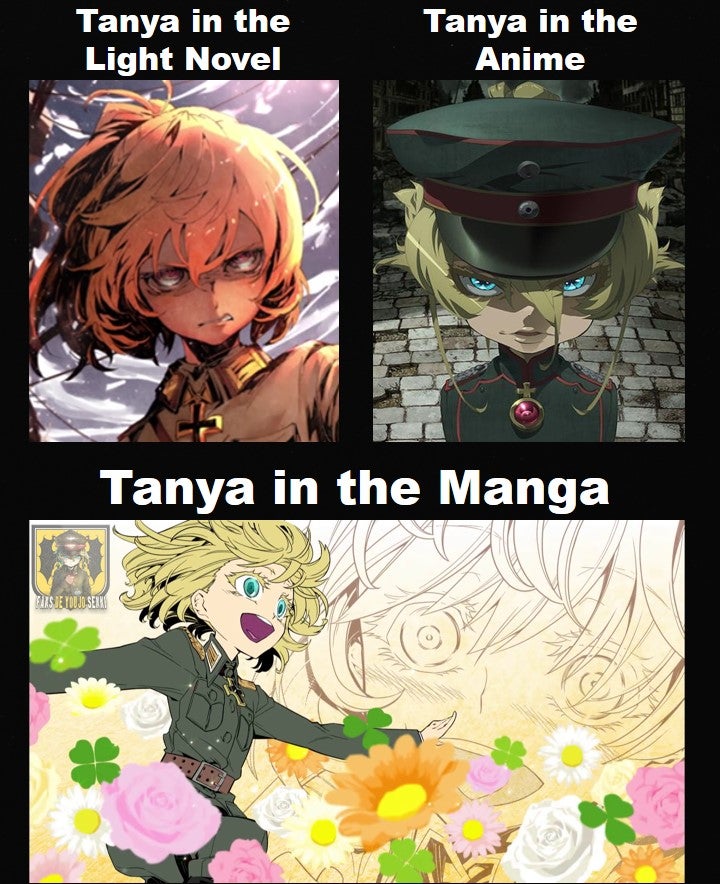 On the other hand, Made in Abyss is considered to be a really good conversion, but still, here are differences: 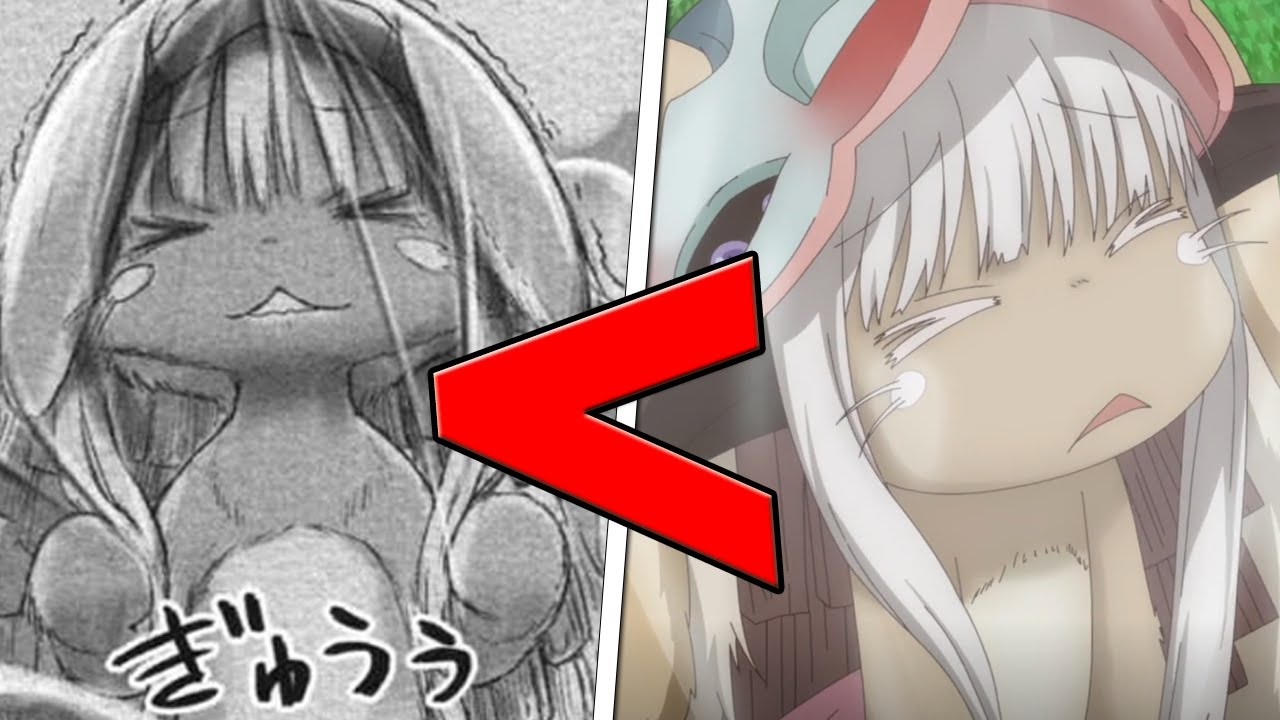 Art in anime adaptations is generally simplified compared to the source manga (even more so from a light novel where each volume has only a handful of sometimes very detailed illustrations) due to needing to be drawn and coloured multiple times a second consistently by multiple people within tight time constraints and to a budget. How much these designs differ is entirely case-by-case depending on how detailed or unique the original art is, the anime budget, and also stylistic choices* etc.

Anime all have a character designer who is almost always** a different person to the original artist (who will be credited as キャラクター原案, usually translated as “original character design”) and is also often the chief animation director and is responsible for adapting the designs and creating character layout sheets (settei) that the other animators refer to: 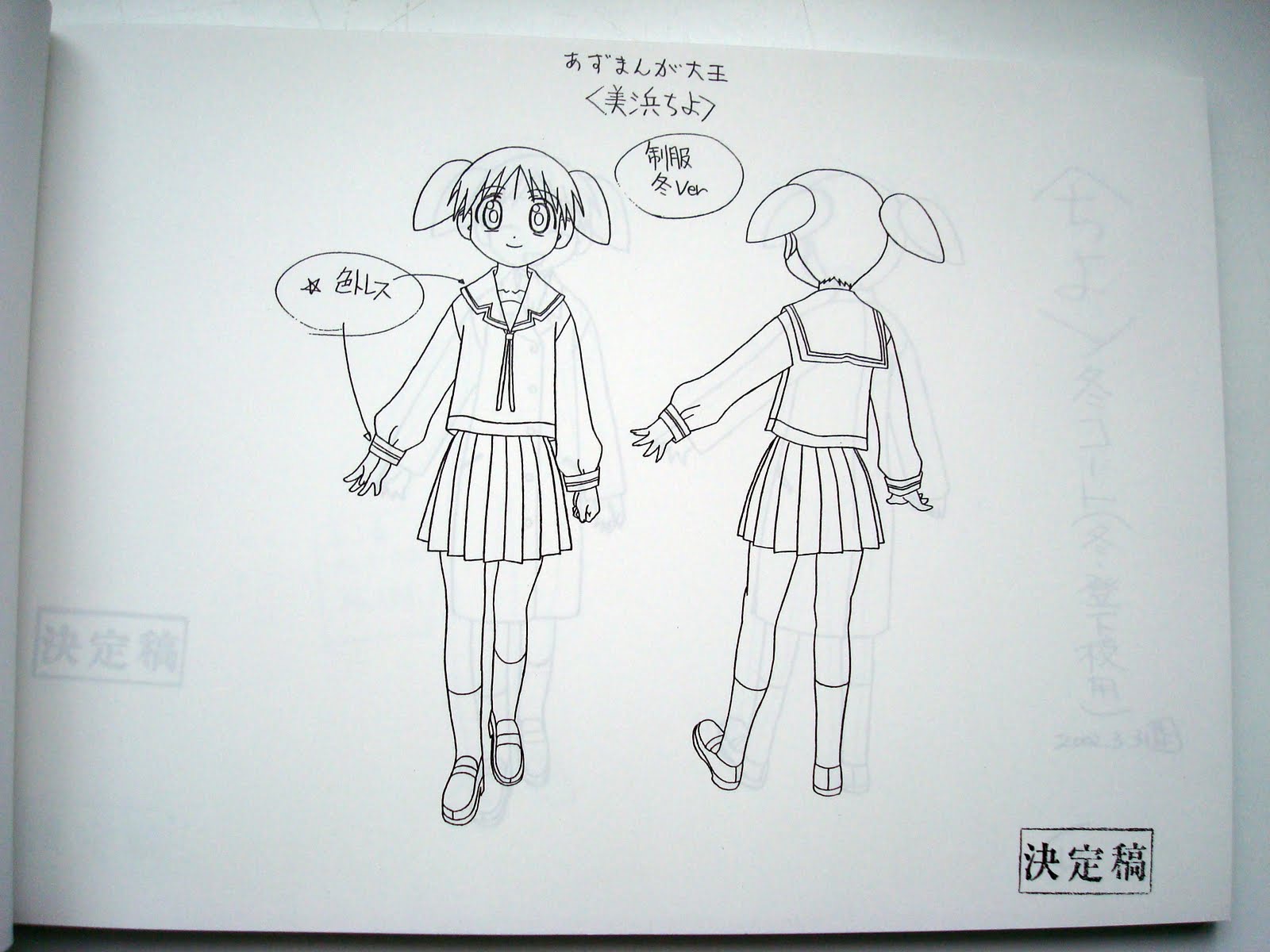 As you can see these feature solid lines and shapes. Most manga art is black & white and shaded using one or multiple of a variety of methods from pencil shading to ink hatching to applying screentone. Anime on the other hand (while there are some that apply a digital texture, notably Gankutsuou) are largely done as blocks of solid colour formerly painted onto the backs of the animation cels but now done digitally using a paint bucket tool. There will be a dedicated colour designer who creates colour versions of the character settei for the colouring team to refer to: 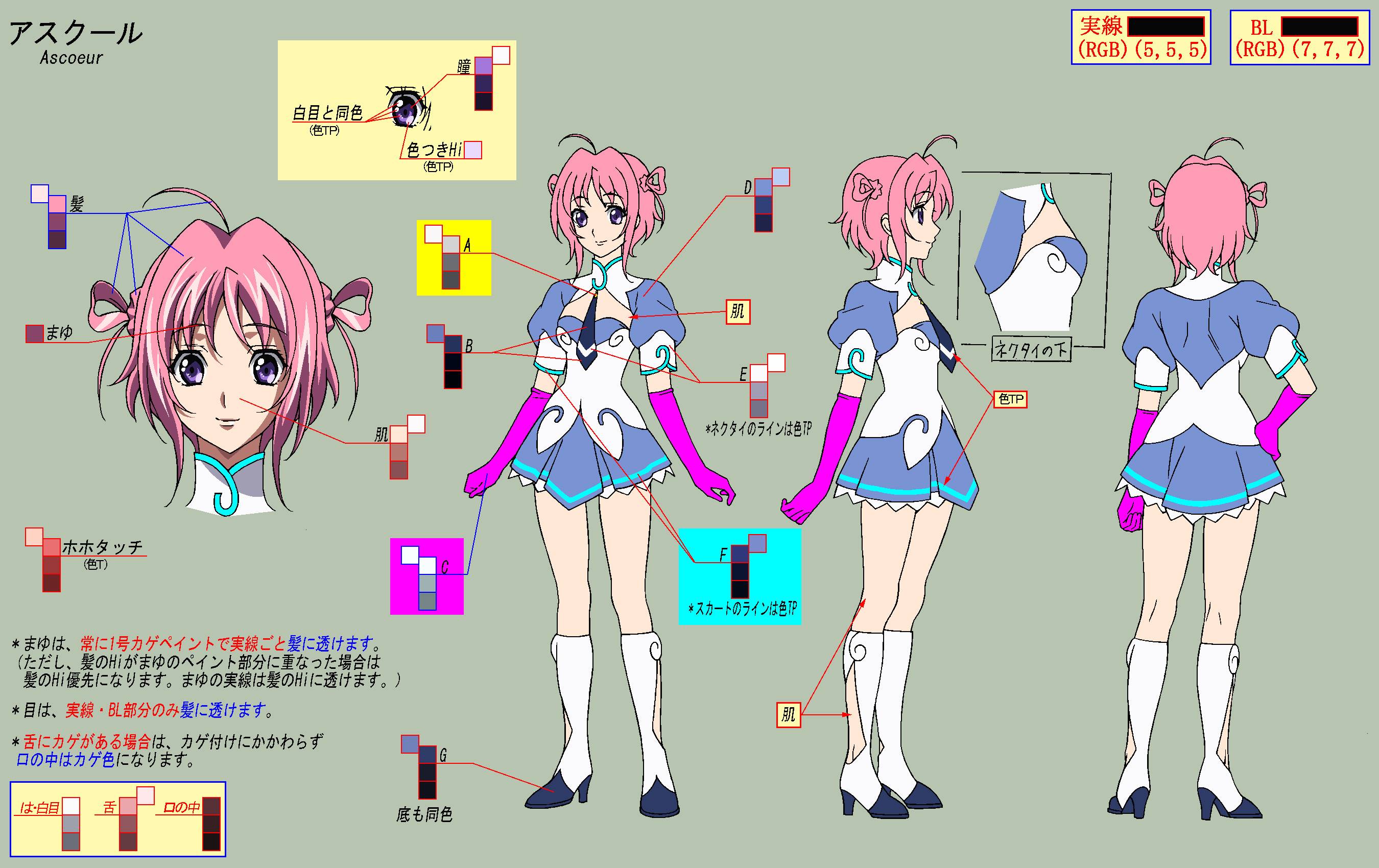 * there are some anime that in my personal opinion actually improve on the manga art, like Erased

** A rare exception is Mahouka, where they had an Ishida Kana, an animator by trade, do the novel illustrations and she went on to be the character designer for the anime also.

Not the answer you're looking for? Browse other questions tagged anime-production manga-production .

2
What does 'konnichi sappo' mean in episode 8 of Kaguya-sama: Love Is War?
3
Art style choice?
-3
1st episode: Why does Raiha call Itsuki by 1st name (presumably without knowing the existence of the other quints until S01E04)?

29
How much does a typical anime episode or series cost to make?
8
How much content is required at minimum for a manga to get anime adaptation?
2
How does a series go from manga to anime?
7
Anime deviation from manga
8
Why is there so much nudity in anime and manga?
12
Why do light novels and manga have long titles?
8
Why do mecha anime tend to be original works?
5
What does もっとたゆたゆver. mean in AT-X shows' broadcast information?
2
Term for animation style change that accentuates emotions/feelings