What does the phrase "he's pulling an Amaterasu-sama on us" mean?

Who is that Amaterasu character they're referring to in episode 6?

"He always goes straight to his room when he comes home. He's pulling an Amaterasu-sama on us." 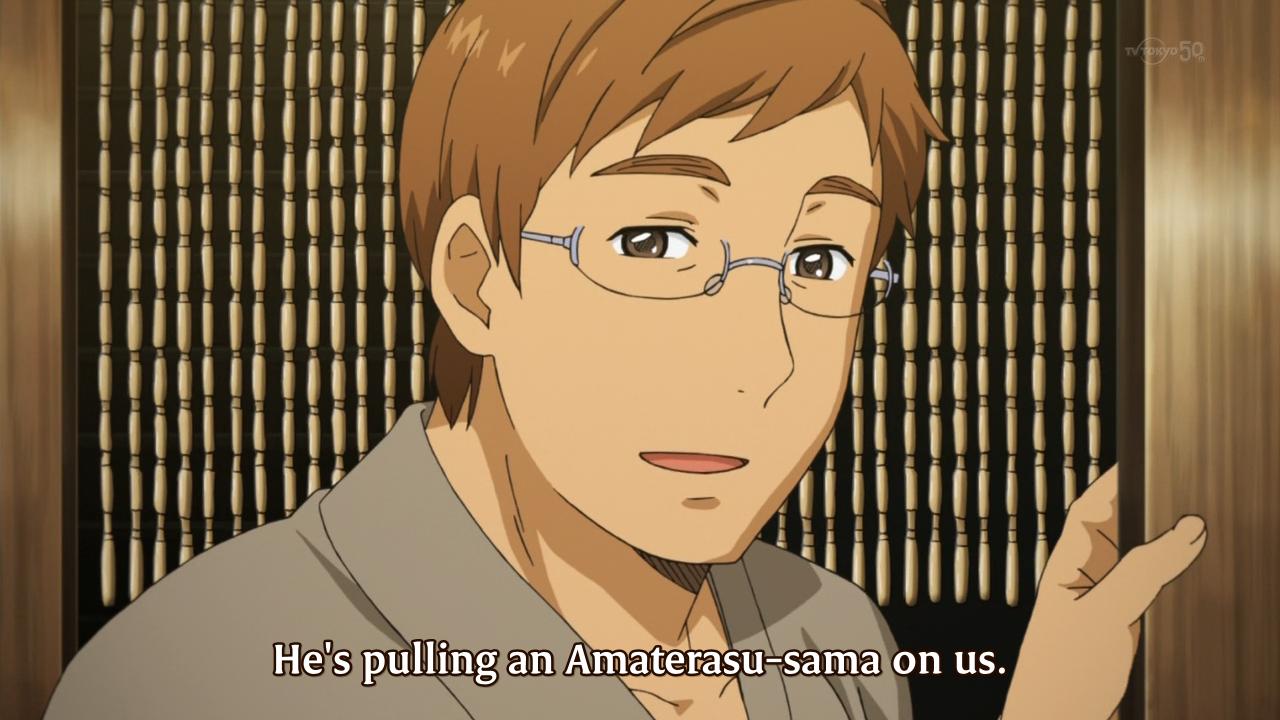 This is probably a reference to one of the most famous episodes involving Amaterasu, the sun deity of Shinto myth.

In the beginning, the world (or maybe just Japan) was created by Izanagi and Izanami. As a byproduct of this, the three sibling gods Amaterasu, Susanoo, and Tsukuyomi came into being (the latter two having domain over the seas and the moon, respectively).

Amaterasu and Susanoo had a long-standing rivalry/conflict. As part of this, one day, Susanoo threw a flayed (i.e. skinless) horse at Amaterasu and performed some other crude acts. Amaterasu, very angered by this, entered the Ama-no-Iwato, a cave. There she remained for a very long time. During this time, it is said that the sun did not rise, and this was widely considered to be a bad thing.

As such, the character being referred to in your quote is displaying Amaterasu-like-behavior - holing himself up in some secluded place, just like Amaterasu did when Susanoo angered her.

literally means "The cave of the sun god" or "heavenly rock cave". In Japanese mythology, Susanoo, the Japanese god of the seas, was the one who drove Amaterasu into Ame-no-Iwato. This caused the sun to hide for a long period of time.

In order to get Amaterasu out of the cave the other gods threw a party outside. When she heard the noise she got curious and peeked but got blinded by the mirror Yata no Kagami and so she thought they were celebrating the arrival of an even greater and brighter goddess than herself. Though in reality it was her own mirror image. Then Tajikarao forced the cave to open up the rest and the world was bathed in light once again. As Amaterasu stepped out of the cave a holy seal was applied to it so that she couldn't go back into hiding.

Additionally, Tatsuo Saeki says to Makoto right after: You know how she hid in the "Ama no Iwato"?

Not the answer you're looking for? Browse other questions tagged gingitsune or ask your own question.