Question about debt after completion of Liar Game's revival round

There is one thing I am very confused about in Liar Game's revival round (which lasts until chapter 28 in manga).

It is known at the beginning of this game, each of the 9 players receive 1 billion yen. At the end of the game, Nao won the total of 9 billion yen while the rest of the players have zero yen. I know that the loser will have his billion yen spitted equally among 8 players and suffer more debt (totaling 2 billion yen).

As for the rest of the 8 winning players, including Nao, 事務局 will collect their one billion yen. This is where I am confused. All winning players excluding Nao got zero yen in total. Assuming that Nao decided to keep all the money to herself (totaling 7 billion yen), will these 7 players get 1 billion yen debt from this game even though their debt from the second round is gone?

Yes, your understanding is correct. Revival round players indeed suffer debt if their earnings are less than 1 billion yen by the end of game.

Here is the proof from chapter 47 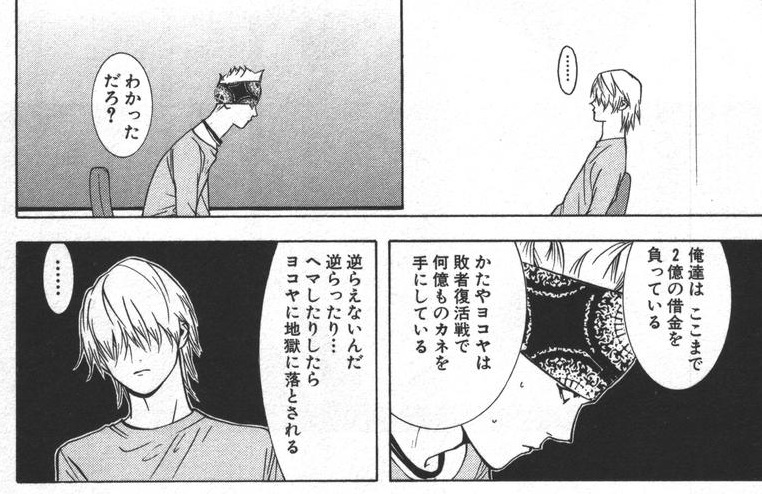 So after Nao returned 7 billion yen to these 7 players, these 7 billion yen will be used to clear their debt earned from revival round. However, each player still have 1 billion yen debt from the second round (２回戦). Is that true?

Yes, take a look at this panel from chapter 48

Akiyama told them that they still have 1 billion yen debt from the second round.

I read few chapters before that their second round debt will be cleared if they win the revival round and it is not true?

I am not completely sure but this is all I can find. Here is the panel from chapter 19

Kikuzawa said that if they win the revival round, his debt will be "cleared." However it doesn't mean his debt will be completely cleared if he wins. Recall what the masked guy said from chapter 7. He told players that when they lose, they are required to return all money to them, even if they will suffer debt from it. So if a player wins a stage and have 1 billion yen debt, 事務局 will not collect their 1 billion yen (this is what "cleared" means) but if they lose, they will be required to pay back 1 billion yen.

Not the answer you're looking for? Browse other questions tagged liar-game .