Why does school bullying keep showing up in manga?

School bullying has always been an element in manga, but why? Is it because school bullying is common in Japan, or some other reason? If it indeed has something to do with the common bullying in real life, who is more likely to be bullied in school? How does this fact affect the related manga?

Bullying is a persistent problem in Japan. It has its own term called "ijime". The Japan’s Ministry of Education, Culture, Sports, Science and Technology (MEXT) has been tracking reported cases of ijime since 1985. Although it has gradually altered its definition along the way, it has always said bullying will be considered as such no matter if it occurs at, or outside of, the school. The definition goes sometimes like this:

Ijime is an act by a student, or students, toward another student that inflicts some physical or psychological consequence causing the receiving child mental or physical suffering.

Over the years, cases of bullying is on the rise, mostly in elementary school (more statistics in reference): 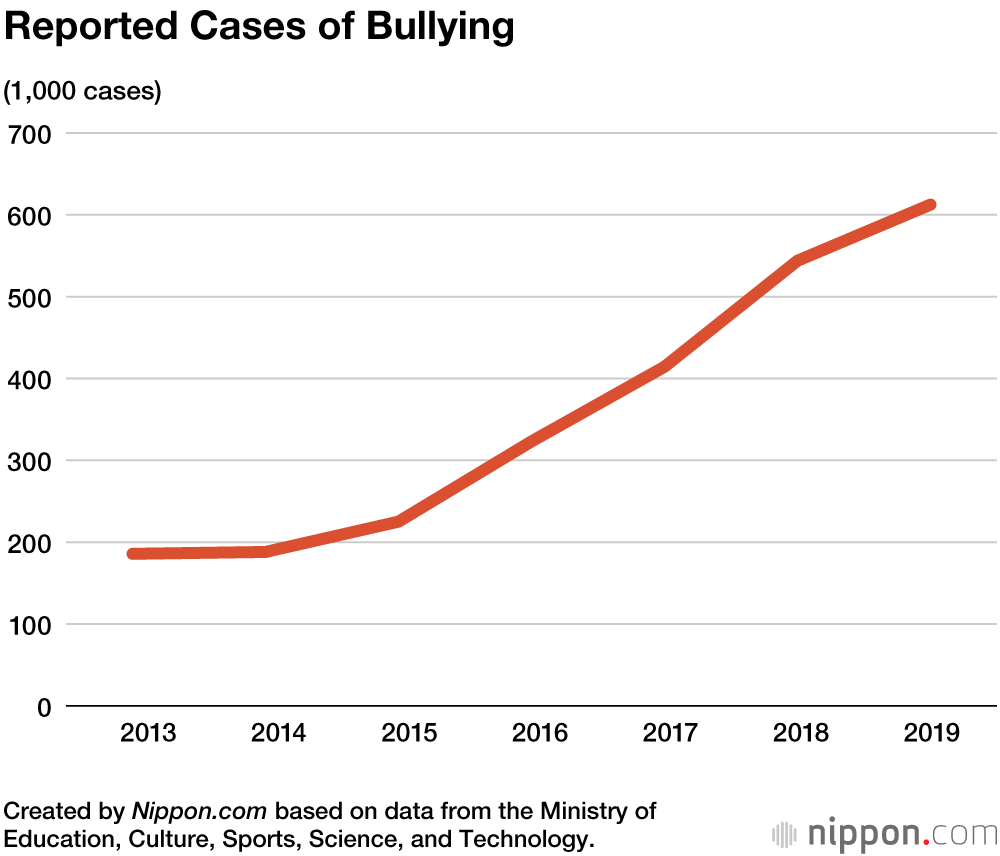 Hence, we find bullying a common theme in manga and anime. Anime/Manga focusing on high school life/romance sometimes contains scenes of bullying. An anime whose primary focus was bullying was A Silent Voice. This anime film examined the impact of bullying from the perspectives of the bullied and the bully with an uplifting message. A big part of what makes A Silent Voice stand out as a film is that it examines bullying in a rather unconventional way. It does a lot more than set a former bully on a path toward redemption by reconciling with his former classmate; it also looks at some of the reasons bullying happens in the first place and how that impacts others who are caught in the crossfire. The film also scrutinizes the school system's failure to protect vulnerable children and prevent bullying. This film was also primary subject on the study "Framing School Violence and Bullying in Young Adult Manga". You can find the details in the reference.

The entire industry is a bit incestuous. It is less common for modern manga to actually reflect reality and more common for manga to reflect other manga.

Bullying might or might not be an actual issue, but the real reason it keeps popping up in manga is because there are plenty of manga thematizing bullying.

It is very rare to find a manga about something that you cannot also find in many previous manga.

Not the answer you're looking for? Browse other questions tagged manga-production japan .

7
What differentiates manga from other comics?
10
There's a manga I like and I want it published in the West. What can I do about it?
12
Why do light novels and manga have long titles?
12
Why do the stronger enemies in anime/manga tend to look more human?
10
Is it common for Japanese school kids to live alone IRL?
2
Why does the Shield Hero manga have the qualifier "The Manga Companion"?
0
Attire for a Japanese fireworks festival: Why does Miyuki (Shirogane) REALLY attend in school uniform?
0
Attire for a Japanese wedding: Why does Raiha attend Fuutarou's wedding in school uniform? (S1 finale)