Is it possible for Kakashi to obtain an Eternal Mangekyo Sharingan?

He doesn't have siblings, nor he is an Uchiha, so the answer would be simple, but as we've seen, he reached a high level in the usage of the Sharingan. so, based on our knowledge of how the Mangekyou Sharingan works, could the combination of his and Obito's eye result an Eternal Mangekyou Sharingan?

The answer to your question is yes, Kakashi can obtain Eternal Mangekyou Sharingan.

But the problem is that his Sharingan consumes a lot of his chakra. At some stages, his overuse of Kamui made him exhausted, too. In this source, it does say that:

"Repeated use of the technique puts a great deal of strain on the user, causing his left eye to bleed if overused"

As a result, using Eternal Mangekyou Sharingan could result in a life-threatening situation for him. And as per the previous answer, you need to transplant a Mangekyou Sharingan, preferably from somebody close, such as a sibling.

Reread this section from Chapter 386 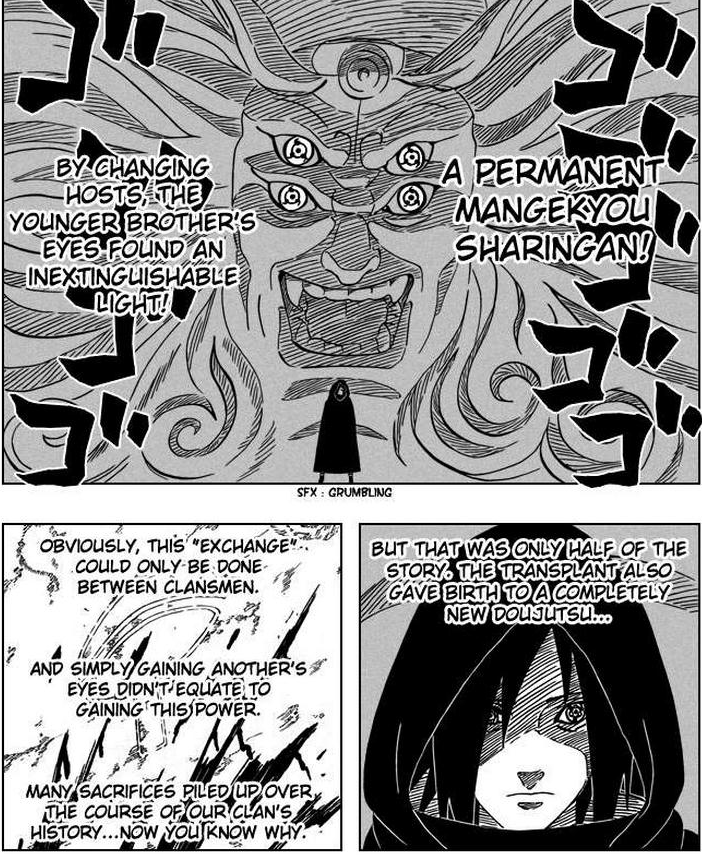 There are multiple reasons why Kakashi cannot gain EMS. First, the exchange must be done between clansmen. Kakashi doesn't fit in this category. Further more, the manga states "simply gaining another's eyes didn't equate to gaining this power". This is implying that you need to gain your brother's eyes as well as a new set of eyes.

One can argue that Kakashi and Obito are like brothers, however Kakashi isn't gaining a new eye if he swaps with Obito.

In the end, it is impossible for Kakashi to achieve EMS.

Technically speaking, Kakashi should be able to obtain the Eternal Mangekyou Sharingan. But the chances of this happening are very slim.

Yet, Kakashi may also be an exception in this case as he does not/barely seem to lose any of his eyesight when he is using his Sharingan. This might also be due to the lack of use, and the lack of powerful eye powers besides his Kamui.

Over time, use of the Mangekyō Sharingan's techniques deteriorates the user's eyesight to the point of blindness, a harsh fate for those that have grown accustomed to the power and visual acuity it affords. Only by transplanting the eyes of another Uchiha can they hope to regain their sight and ocular powers. If the transplanted eyes happen to be the Mangekyō Sharingan of an Uchiha with strong blood ties with the recipient — ideally a sibling — the likelihood of compatibility is increased, resulting in the creation of an Eternal Mangekyō Sharingan source

Yes, Kakashi can obtain Eternal Mangekyou Sharingan. I would have to disagree with kakashi's answer though. EMS consumes lesser chakra and puts lesser stress on the user casting it. Kakashi has to possess a Mangekyou Sharingan eye, assuming it's compatible to him, since it's not possible to obtain EMS just by implanting another set of MS.

So using EMS would be less life threatening to him than using MS, since, there is no risk of blindness after obtaining EMS.

Since we're stuck, let's sum up what we know:

So we could say that the odds are even, but it just hit me... Do we realize that we are talking about the same eyes??? As much as I would like to see him equipped with an EMS, if he could gain this eye by simply fusing his one with Obito's one, it would be the same as Madara would've fused his own eyes into one (we can argue that he would lose one eye, but the other would be an EMS), so practically every Uchiha member could've possessed an EMS just by fusing their own eyes.

So if we must make a conclusion, even if he isn't an Uchiha, nor he has siblings, therefore he doesn't got a chance to obtain a new set of eyes, I think the best answer and reason why Kakashi CAN'T obtain an Eternal Mangekyo Sharingan (but I'm eagerly waiting for "can answers") is because fusing your own eyes wouldn't result in EMS.

Kakashi is able to obtain EMS from another MS if obtained. He can't transplant Obitos MS that's stupid each MS eye left, right have there own powers, besides this they are the same exact MS so there won't be any difference. When someone has MS and wants a EMS needs another MS from another person (Clanmate) to obtain EMS by combining those 2 MS they both combine their forms to make a mix like form for the new EMS.

One thing I'm curious we saw Madara with his brother when he got his eyes they mixed and became a new form,same thing with Sasuke with Itachi eyes. But I can't understand when Sasuke fought with Itachi, Itachi wanted Sasuke's eyes even though they weren't MS. I thought to obtain EMS you need both users' eyes to be MS with different form to make a new form which would be the EMS, but the way Itachi was going its like transplanting normal Sharingan with a MS to make an EMS if that was so and would work what would the new EMS form would look like?