Is there any canonical evidence that the winged being curses were really lifted?

About the anime version of Air:

Some sources on the net state that Kanna's curses were broken, and her next reincarnation would be a happy one.

Some say that the pair of children playing on the beach were the reincarnations of Misuzu-Kanna / Yukito-Ryūya.

What is the canonical explanation of this ending? Did the curses really get lifted? Please include sources in your answer.

According to this page, which cited a study of Air's ending:

From: "Colourful Pure Girl" in the March edition.

"The author declared that those two kids were not the reincarnation of any of the characters and he doesn't want people think of air like that."

The author also says that those two kids were more of outsider view point. It's like themselves (KEY) are watching the story.

How to get to the study's page: 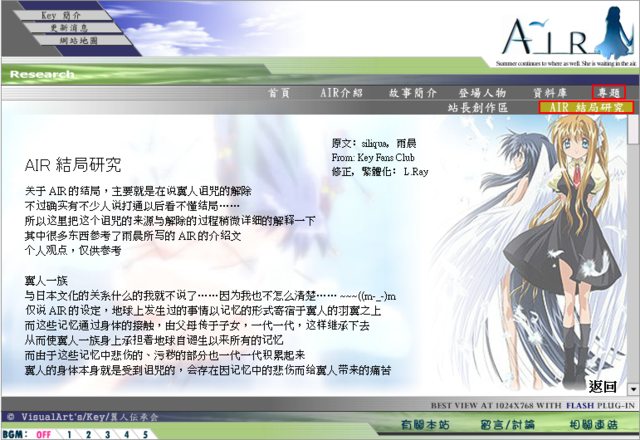 (The text is taken from Key Fans Club.)

In more detail: the study said there were three curses that were cast on Kanna:

The children playing on the beach at the end should not be seen as the reincarnations of Misuzu-Kanna/Yukito-Ryuuya, but as the all-knowing Key staff and you, the viewers.

Not the answer you're looking for? Browse other questions tagged air or ask your own question.

1
What does the ending of anime 'Air' mean?