In Kuroko no Basuke, are the characters ever compared to professional players?

So, in Kuroko no Basuke (or, The Basketball Which Kuroko Plays, as suits you), we see that the Generation of Miracles has some pretty wacky basketball superpowers. I'm no basketball expert, but it seems like if you took the five of them and transferred them into the real world (powers and all), they would beat most actual NBA teams. And the thing is, they're just 10th-graders. Sure, maybe they're the best 10th-graders (even the best high-schoolers) in Japan, but surely they can't be as good as professional players in the KnB universe, can they?

Which brings me to my question - does the manga ever talk about how good professional basketball players (NBA or otherwise) are as compared to the high-school players the story focuses on?

Kuroko no Basuke (manga) never references any actual NBA pro by explicitly stating a name, but they have shown panels of professional basket ball players insinuating that they are from the NBA. The characters depicted don't actually resemble any specific pro, but rather a generic player - tall, built, and African-American.

Take Kise's copying ability for example. He can only copy people's techniques that he is capable of executing, but because NBA players are so much bigger, faster, and better, his copying won't work.

Or in Midorima's case, he might have the insane accuracy as usual, but an NBA player can easily block his shot.

In the end, however, I don't think Kuroko no Basket will ever mention and compare with top NBA pros. There are certain things that are completely impossible, like Kuroko's phantom shot. It doesn't even theoretically work in real life because NBA plays man to man defense, where each member playing has to always follow their assigned opponent. You can't just misdirect someone following you and not see you shooting.

And don't even get me started on eagle vision...

UPDATE: In one of the latest chapters (242) that I haven't read yet, Ray Allen of the Boston Celtics is shown as the first NBA player in Kuroko. This is somewhat inaccurate though, as Ray Allen has been part of the Miami Heat for 2 years now. 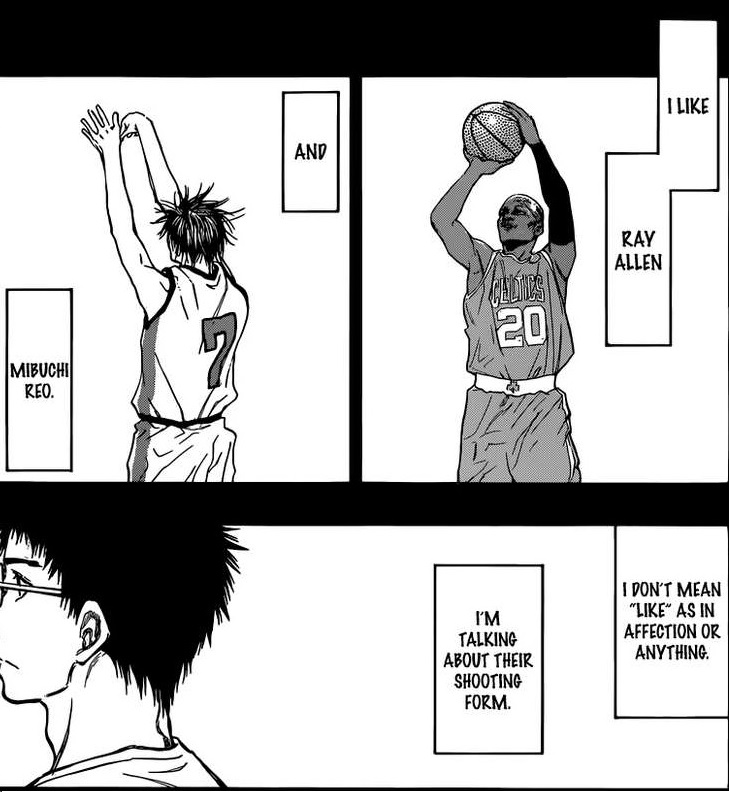 Actually, they only did it once. When they compared Ray Allen to the SG of Rakuzan.

dingersdingers
11
1
Add a comment  |
Highly active question. Earn 10 reputation (not counting the association bonus) in order to answer this question. The reputation requirement helps protect this question from spam and non-answer activity.

1
Does the "running technique" of Seiho players exist in real life?
3
What are the differences between the two personalities of Seijūrō Akashi?