Why couldn't they make a vessel for Adam sooner?

In Evangelion, why couldn't they have made a vessel for Adam sooner or brought an angel close to have started the Human Instrumentality Project.

What was the point of Rei also then? Making a vessel for Lilith's soul hardly serves the purpose of the project, and will go to waste anyways when it occurs. How was she significant to the project and what is her significance?

Gendo's own scenario for the Third Impact was "the forbidden fusion of Adam and Lilith", his goal was to be reunited with his dead wife Yui who died during the Contact experiment which lead to the Second Impact, for this he required 2 things, Adam and Lilith.

In the aftermath of the Second Impact, Adam's Soul was separated from it's body which had been reduced to an embryonic state, Adam's Soul was recovered and stored in the 17th Angel Tabris (Kaworu Nagisa) which SEELE sort to use in instigate their Third Impact by having him make contact with Lilith, if it had worked the result would be an Adam Dominated Third Impact under the control of SEELE.

One reason why SEELE couldn't send Tabris quite possible because he wasn't ready to be used yet but the other main reason was the Lance of Longinus, so long as it was in Lilith the Third Impact couldn't start (it was placed there to stop it but in a way that they could remove it one all the components for their plan were prepared), it wasn't removed until it was used as the last ditch effort to kill an Angel which no EVA could reach, it's not known how SEELE would have acted had Gendo not ordered the lance to be used.

Rei's purpose was all Gendo's Third Impact Scenario, not SEELE's. Gendo made SEELE think he was on their side however he was working on his own plans to be reunited with Yui, who Rei is a clone of. much like with SEELE's plan, Gendo couldn't act while the lnace was in Lilith however when it was removed and he could confrim that SEELE couldn't interfere with another Adam he executed his plan (which we don't see until End of Evangelion). Gendo's plan was to control Rei in a Lilith Dominated Third Impact but Rei rejected Gendo and took the embryo of Adam from him and fused with Lilith.

First adam: Adam was found in the South Pole, impaled with the Lance of Longinus, which puts the sources of life (Adam and Lilith) into some sort of statis: 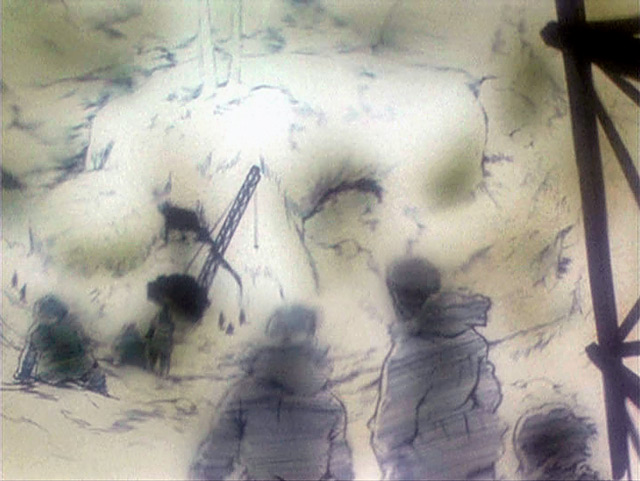 During the Katsuragi expedition, the experiment went haywire (episode 21, Director's cut). The aftermath resulting in Adam blowing up and Adam's soul being lost. Seele collected the soul and put it in an artificial body, Kaworu. The assumption is that Kaworu, having a birthday on Second Impact, was artificially created that day, which would seem to indicate that Seele was at least prepared for such an outcome.

The reason why Seele didn't want to bring an Angel close to Adam is believed that part of the prerequisite of their version of Instrumentality is that all of the Angels need to be killed. The final step in accomplishing that was Seele sending Kaworu, the 17th and last Angel, to Nerv to be killed by Shinji and Evangelion Unit-01. Why Kaworu would agree to this is a mystery.

Rei, on the other hand, is similar to Kaworu (Episode 24) in that she was artificially created (Episode 23) to hold Lilith's soul. Rei was created by Gendo in order to complete his version of Instrumentality, in which Gendo would be reunited with his wife Yui. How this was supposed to work, is also a mystery. At the end, Rei betrayed Gendo in order to put control of Instrumentality in Shinji's hand (End of Evangelion).

33
What is the purpose of the Human Instrumentality Project?
7
What is the Vessel of Adam?
5
Why did Rei abandon Gendo for Shinji?