Why does Eiken have his camera?

In the first part of the manga Cage of Eden, when Sengoku, Oomori, and Mariya went to the plane crash site, they saw the video camera that was being used by Eiken. They saw what happened on days they are not at the site abd they found it left inside the plane but Eiken is not in there. In first part of that arc, it is also implied that Eiken left the camera on the plane and made Rion the one to use the camera (she's the one who captured the scene about stabbing the pilot.)

So when everyone was gone, Sengoku found Eiken's camera inside the plane, where he also found Rion.

Meaning to say, Eiken should not be carrying his camera when they went to other places.

But when they went to the Top of the Mountain, there is a short slide that shows Eiken using his camera zooming wide distance in order to see the antenna tower,

So how is that so?? If Eiken left his camera inside the plane, how does he hold it when their group was on the top of the mountain?

Is this a mistake of the author?

They didn't mention anything like this in manga but lets just assume that he has more than one camera. At the first time Sengoku found Eiken's camera inside the plane, it was white. 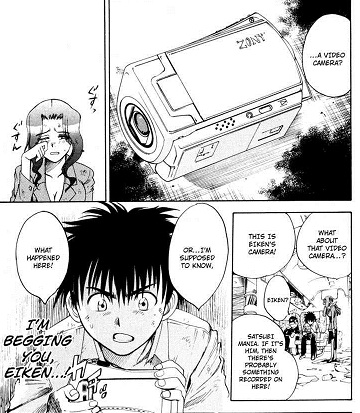 And the second camera, when Sengoku met Eiken, it was black. 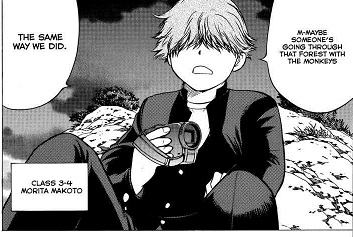 So I think the one that Eiken left on the plane is the first camera, later on he only use the second camera for the rest of manga.

They also mentioned it on wiki

Considering his first camera was blown up during the plane which he left behind, it is suggested he has more than one camera, as well as numerous batteries on hand.