Why did L trust the handcuff so much?

L: If I die, as long as I have this (handcuffs), you'll share the same fate as me

Okay, excuse my language, but what is up with that? It's just a handcuff, you'll be able to chainsaw it or something!

If L thought that far and actually made the chain indestructible (Maybe he used titanium or something!?), we would have probably been able to pick it.

IF (highly unlikely) L actually took every precaution, L's body is not going to be as strong as the metal.

So why did he trust it so much? Was it a bluff/joke?

It was indeed a bluff made by light

He had Rem write in the death note before the following fake rules that were going to prove that Light and Misa were innocent under any accusations as being Kira, "If the owner of a Death Note does not use the notebook after 13 days time, he or she will die" and "If the Death Note is burned, torn up, or otherwise rendered useless, any people who have touched the Death Note will die". With Light and Misa having no contact with the death note for more than 13 days, since they were both confined, and neither of them had died, that would prove to L that neither of them were Kira. L agreed and he finally took the handcuffs off of Light.

Following this info it would mean as long as Light is bound to L he could not use the notebook. Meaning he would die after 13 days, this would render the book useless so L would die as well as he touched the book before hand.

What L said wasn't a bluff. He was just repeating what he said just before Light and Misa were confined.

Light: Didn't you say that it's scary to appear in public? Is this really okay?

L: I realized that if Yagami-kun isn't the killer, I should be fine... Since only Yagami-kun knows who I am.

L: Yagami-san will take over the investigation and every L will know that Yagami Light is the killer. 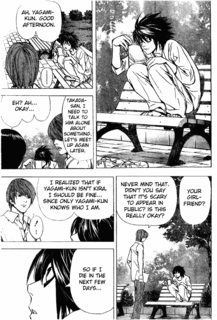 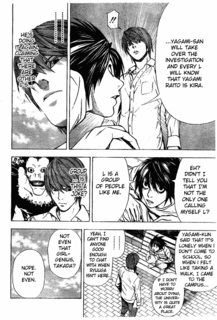 Yagami presumed this to be a bluff, that there were no other L around and called that bluff later by using Rem.

But we see later that this is exactly how it went down. The other L being Mello and Nero. N almost knew from the start the new L was the killer.

In chapter 33-36, Misa is confined. Light makes preparations for later and turns himself in. Both Misa and Light were confined for more than 13 days and are finally released again.

In chapter 37, L handcuffs Light, because at this point L still believes Light to be the killer. He just can't prove it due to their long confinement and the continuation of murders. So he still believes what he had said in chapter 32 and thus to repeat this in front of everybody he says that they will both share the same faith.

Later when L actually dies, Light can escape imprisonment, because of the fake rules he had put up. If the 13 day rule wouldn't have been in the Death Note he would have been captures by the NPA and L's prediction would have come true.

8
How did Ryuk trick the King of Death Gods?
8
Did Light truly love anyone?
1
Why did Light want to kill Near?
4
Why did Rem die in The Last Name?
9
Why did Rem kill L?
3
Was Soichiro Yagami that much close to his natural lifespan?
2
Why did Teru Mikami confirm Death Note's validity by examining the pages with a microscope?
3
Why did Near start to suspect the presence of a second Death Note?
1
Why did L not prevent the report of Kira's tests in the police database if he already concluded he must have had access to such information?