Why does Gilgamesh's casual appearance look different in different routes?

In the actual Fate Route (after Saber is summoned) we see Gilgamesh in casual attire when he confronts Saber and Shirou before getting into his golden armour. However, in Unlimited Blade Works and before the start of the Fate Route, his casual attire is different, particularly his hair and that he's not wearing earrings. 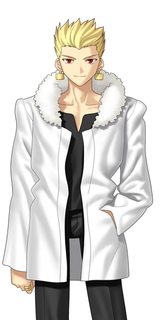 Now I can understand that in Unlimited Blade Works the reason he doesn't wear his armour when fighting Shirou in the end is in part due to his ego in thinking he won't need it on someone like Shirou. However, I don't think it's his ego which is the cause of his change in appearance.

So I am wondering, why does Gilgamesh's casual appearance look different in these two routes, considering his Unlimited Blade Works appearance was also seen when he was talking to Sakura?

I never play Fate/stay night until the end but know a little, I think it's more like "he has anything in his vault and willing to wear casual clothes, so let's make him stylish" sort kind of thing. Because as I know, other servants don't even wear "normal casual" clothes as much as Gilgamesh, they pretty much always use their astral dress/clothes which is very(?) strong/sturdy (in the case with Saber's dress that can block certain magical attacks).

As for the reason why Gilgamesh wear casual clothes much, I think it's to emphasize his arrogance, I mean he is a king and think himself the most powerful entity in their universe, and mostly because he is ranged-type because most of the time he just throw whatever in his vault, even his strongest weapon Ea isn't melee-type weapon like Lancer's noble phantasm Gae Bolg: barbed spear that pierces with death or even Caster's Rule Breaker or Assassin's Tsubame Gaeshi.

Gil likes to keep up with the latest fashions, and has a number of casual outfits

From a real-world perspective, my guess is just that they wanted to give him a few different looks, instead of making him look identical in every scene.

In-universe, though, the golden armor is his proper battle outfit when he takes a fight seriously. He owns quite a number of casual outfits, as the Type-Moon Wikia entry on him notes:

He normally wears golden armor that makes a heavy first impression on those he encounters. [...]

He likes to wear casual clothes, "playing attire" to ward off boredom from being in spirit form, when not in battle, later becoming knowledgeable on the latest fashion trends after living in modern society for ten years. He has collected a number of casual outfits.

(And that's not even including Fate/hollow ataraxia.)

The article cites the entry on Gilgamesh in the Fate/side material book, p. 59 (translated by Mcjon01 on p. 39-40 of this PDF):

Perhaps because he has been living in human society for the past ten years, he seems to be hip on the latest fashions. He owns various casual clothes, but his favorite is the biker outfit he wore in the Rin route.

Well, he liked it enough to overlook Shirou's group and leave instead of letting it get dirty, at any rate. I can't believe the protagonist's life was worth less to Gil than his coat…! [...]

Also, during the design stage, I selfishly insisted that "Gil absolutely has to wear full golden plate armor".

Why, you ask? Well, it might be because I was repeatedly challenging a certain 60 story tower at the time…

(This is an apparent reference to the character of Gilgamesh in the game The Tower of Druaga.)