I saw half an episode of anime once (7-10 years ago probably) on adult swim(I think). While this seems minor, it is the one that convinced me to give anime a chance as I had only seen one other and was definitely not a fan. As there are several now that I enjoy, i'd like to know what that one was.

In what I watched, some individual was introducing a machine gun with linked ammunition on a tripod to 4 swordsmen. I believe one was a protagonist (I believe samurai) while the other 3 were known criminals. The setting appeared to be japan around the time of Commodore Perry. Fearing the impact the weapon would have on their home (I think), the 4 swordsmen teamed up against the gunner.

What I remember most is the ending; I believe one criminal sacrificed himself before this. A large one charges straight for the gunner. As he is killed, a small one jumps from his back as throws a seed or something between the linked ammunition and is promptly shot and killed. The final guy (again originally antagonistic to the other 3) runs toward the gunner. The seed jams the gun temporarily and the swordsman slays the gunner. He is the only survivor. That is all I remember. 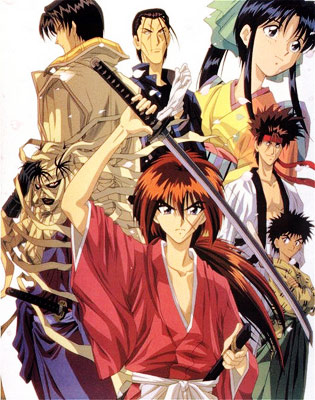 and the character you talking about is Shinomori Aoshi.

Kanryū betrays Aoshi and kills his four subordinates with a Gatling gun while they die one after the other protecting Aoshi.