One Piece chapter 467 when Zoro fighting Samurai Ryuuma at the end of their fight Zorro slash him down and his wound become a fire? Is there any explanation about this? I don't remember Zorro doing something like this again later. 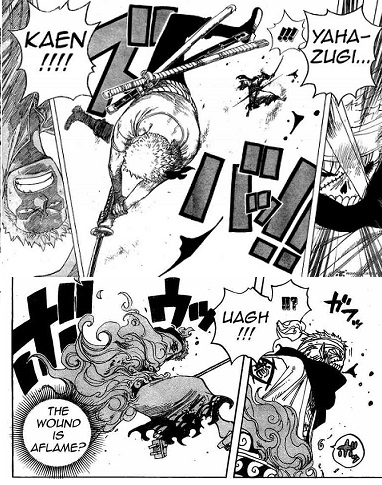 This is one of his Santoryuu/Iitoryuu techniques.
According to the wiki: -

Hiryu: Kaen (飛竜火焔 Hiryū: Kaen?, literally meaning "Flying Dragon: Blaze"): Using one sword wielded in his left hand with his right hand gripping his left wrist for support (or vice-versa), Zoro jumps high up into the air and slashes his opponent. After slashing them, Zoro's opponent then bursts into flames (in the anime, the color of the fire is blue instead) from where they were slashed. This was first seen being used against Ryuma. The animal or creature that usually accompanies Zoro in the background when performing powerful techniques is an occidental dragon. The dragon bares an uncanny resemblance to the dragon killed by Ryuma the King from Oda's earlier work, Monsters. The scene where Zoro slashes Ryuma with this technique also resembles the scene from Monsters, in which Ryuma slays the dragon.

Zoro has used this technique only once. There are many techniques which he has used only once!
Plus the name of his techniques are pretty complicated so its hard to remember :P
For further references, you can check the wiki

It is the sword technique that causes the flame, although not properly explained how it is assumed that this technique uses Friction Burn to set the enemy ablaze.

13
Is Roronoa Zoro based on Rurouni Kenshin?
11
How does Sanji produce fire in Water?
19
Does Sugar remember who she had turned into a toy?
3
Are Logia types overpowered?
10
What are the similarities between Gol D. Roger and Monkey D. Luffy? Are they related by blood? What are their relatives' ages?
0
How did Crocodile become a warlord?
2
What did Jinbe lose in Charlotte's roulette?
2
Is Haki fire proof?
0
What's up with people's regeneration in One Piece?
1
Nami's message in Strong World movie