Do we know anything about Obito's parents?

After Rin was killed, he went rogue and attacked Konoha with the Nine-Tails, and he was obsessed only with his Tsuki no Me plan. Didn't he have any sibling, parent, or someone to care about?? I don't remember seeing anyone close to Obito besides his teammates.

Obito grew up not knowing who his parents were, leaving him alone and forced to fend for himself. This sad upbringing led Obito to dream of one day becoming the Hokage so that the people of the village would acknowledge his existence.

So I think no, he didn't have any parents, siblings or friends, until he met Rin and Kakashi. That is why he was obsessed with the Eye of the Moon plan. On second thought, I think Obito was rejected even by the other Uchiha, so he was totally alone.

Expanding on Rinneg4n's answer. There was a picture of Obito's parents. The photo is aged and has tears, while also being fastened to the wall, instead of tacked. It's probably leading to the assumption that it is very old, and that his parents had died when he was a young age, perhaps during the Second or Third Great Shinobi Wars. Uchiha are a clan built on feelings, and Obito's feeling of loneliness are what fueled his goals with his teammates and his hope of being Hokage.

Of course this by theory, and other people have made assumptions such as them being Rin's parents, alluding to Obito being a stalker, or that Kagami Uchiha (Shisui's dad) is really Obito's dad, since the age difference is not all too impossible, considering Hiruzen had Asuma, and Asuma was Obito's classmate, while Hiruzen was in the same class as Kagami. This leads to fan-theories of Obito being Shisui's brother. Of course nothing is set in fact, as Kishi hasn't released any further information pertaining to Obito's parents. 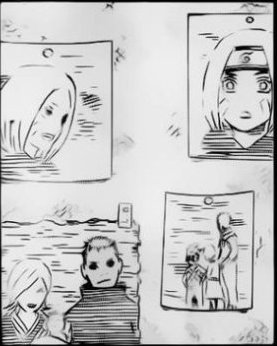 14
When did the Kin/Gin Brothers get their Nine-Tails power?
3
What motivation did Hidan, Kakuzu, Deidara, Sasori have for joining the Akatsuki?
6
What would've happened if Obito didn't accept Kabuto's help?
2
Why didn't Madara start his own plan when he was still young?
6
What is the logic behind Madara's plan A for his revival?
13
Did Kakashi ever love Rin or at least feel anything for her?
12
Why didn't Kakashi take care of Naruto?
6
Why did Obito spare Kakashi?
3
Why was Kisame surprised when he saw Obito (Tobi/fake Madara) without the mask the second time they've met in person?
1
Before Tobi/Madara fought Konan, why no one tried to attack him while he's transporting himself?