When can chakra be seen?

The answer to this question says that chakra can only be seen in certain cases, when the person is using powerful abilities. This lines up with reactions to people seeing Chidori and being surprised that it can be see. However, there are times when chakra can be seen when it is being built up instead of being used in a jutsu.

How does this happen, if chakra only shows up when someone is using a strong ability (such as Chidori)? Or is what Naruto using in the image somehow a different type of chakra? 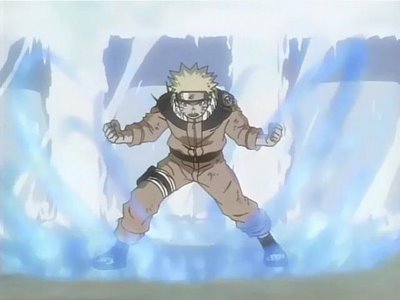 First of, people with visual prowesses can see chakra.

Although chakra is usually invisible, those with certain dōjutsu, like the Sharingan, Rinnegan or Byakugan, can see the colour of someone's chakra. Each person's chakra apparently has a different colour.

The second point comes closer to my heat theory

It is also interesting to note the fact that sufficiently immense amounts of chakra are visible to the naked eye.

Here comes the intersting part " When does chakra count as immense ?"

We know that in naruto there is a system simalar to our blood veins, the chakra pathway system. Allong these paths there are special points called Tenketsu.

Though ninja use chakra regularly, very few ninja possess any great control over their tenketsu. Even of jōnin, the vast majority are only capable of releasing a small amount of chakra through their hands or feet to increase the power of punches, jumps, or kicks

Though not explicitly stated, it is logical to say that the Hyūga clan (and Neji independently) calculated the exact tenketsu that would be required to shut down an opponent's combat ability.

With this information we can conclude that people whom can still function with 64 tenketsu shut are considerd above normal.

Neji Hyūga was shocked that Naruto Uzumaki was still able to stand after being hit with Eight Trigrams Sixty-Four Palms as his body should have been in a virtually quadriplegic state.

We can also assume that the chakra a bijuu transmits to the user surpases the 64 tenketsu limiter, also the chakra from a bijuu is considerd more pure/powerfull then a normal chakra user

The tailed beasts (尾獣, bijū) are the nine titanic behemoths within the Naruto series. They are living forms of chakra, sometimes referred to as "Chakra Monsters" giving them immense reserves of especially strong chakra that far outmatches most shinobi. The tailed beasts' chakra is coloured red

There are still some mystery's regarding chakra. But as we slowly find out more in the manga/anime a beter answer might pop up.

7
Does (Taju) Kage Bushin no Justu return the user his Chakra after he undoes this jutsu?
7
What does chakra physically act like?
3
How does the Sword of The Thunder God get stopped by a Kunai?
3
Can a soul that is normally freed from the Edo Tensei be resurrected again?
2
Why couldn't the Dark Release: Inhaling Maw absorb Rasen Shuriken Technique ?
1
Why can Naruto use Rasengan more than Kakashi using Chidori?
6
What is the logic behind Madara's plan A for his revival?
5
Why do ninjas usually replace their own body with a block of wood?
1
How do Toads in Naruto produce Oil?
2
Why didn't Naruto's Rasengan beat Sasuke's Chidori?