Does Killua have a crush on Gon? Or am I just misinterpreting his text lines?

Short answer: There is little or no canonical love from either Killua or Gon toward the other. If any kind of love is to be clearly deduced, it should be regarded as platonic or brotherly.

Longer answer: From childhood, Killua was deprived of the experience of having friends. He met Canary, a guardian of the Zoldyck estate, and wished to be her friend, but she disciplined herself to not have any personal feelings for her employers (Killua included).

Fast-forward to the Hunter Exam, and Killua meets Gon, quickly discovering that he wants a friendly relationship with him (attempting to sever the ties to his former life as an assassin). In this case, you have to understand that Killua doesn't know how to behave around friends. He does his best to be himself, but he doesn't want to push Gon away. Even in a relationship as simple (to you and me) as friendship, Killua doesn't know how to manage his feelings.

As a result, personally, I would say that Killua just shares a really, really strong best-friend relationship with Gon, and feels a personal need to protect Gon, which can appear romantic at times. Gon, being the nutty lil' boy he is, also tends to express his friendship in odd ways... 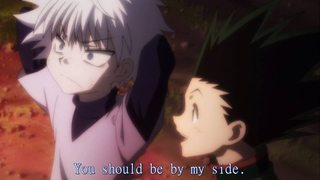 Now, taking all this into consideration... It doesn't honestly seem like there is any romantic relationship between them (though the mangaka seems to have thrown in a few choice lines to tease fans with).

In the episodes mentioned in the question, Killua does have some very odd lines. 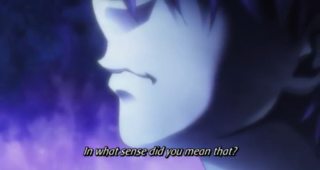 He states that if he asks Gon what he means by "Let's go!", then he "won't be able to go back." This sounds a bit lovey at first, but I think Killua is honestly more worried about Gon, almost like a brother might be. He understands the rage Gon holds within, and is deeply worried that Gon might be headed down a spiral of destruction. With good reason: 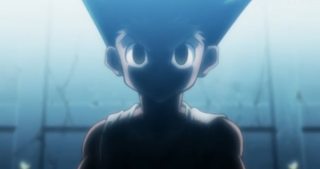 Sadly, though, asking about something like that could almost seem like a betrayal; remember that Killua doesn't want to do anything that would endanger his friendship with Gon.

So while I think it's important to recognize that there is no canonical love in play (at least in the anime, I haven't read past the manga's equivalent of episode 115), I think their relationship is designed in such a way to make us ask this kind of question. Their relationship is far from simple, and that's probably one of the things that makes it so compelling.

Of course he does. They're two guys but that doesn't mean they don't love each other and the fact that they love each other is obvious if you're paying attention to the show. Gon mentions multiple times how he wants to travel the world with Killua, something often said by eloping couples. Killua also mentions several times how embarrassing Gon's words are, precisely because they imply a sort of love. At episode 87ish Killua says Gon was a light that is so bright sometimes that he has trouble looking at him, something a certain romantic Shakespeare Sonnet talks about.

Love doesn't have to lead to sex and neither does gender matter when it comes to having a crush. Their bond is so strong and they like each other to the point where love is a weak word to describe it. Japanese has a word for this kind of friend for life who is said to make your life complete and/or whole, and it doesn't mean a wife but someone more; soulmate basically best defines that word.

Fyi, the Europeans supposedly imposed homophobia on Japan. Homosexuals were more accepted before westernization, probably because such relationships were common among powerful men such as a samurai. It's a controversial concept in Japan I suspect, but not as much as it is here in America.

Gon and Killua's fighting style compliment each other and their characters grow when they are together so they could very easily be classified as soulmates. They obviously like each other and you would have no problem calling it love if one of them wasn't male and if your definition of love isn't so exclusive to male/female relationships (which is dumb). Their relationship is a precious thing not often seen in society, but it's the most natural thing in the world. Everyone should pursue having what they have.

It really is an interesting question.

I'm doing some process and I think that the answer is a maybe. I'm starting to think that there must be something that Killua didn't talk about with Gon. That's one thing you might think about - are Gon and Killua are going to be a couple? My answer is a no. Why you say? It is because I think Gon is starting to have feelings to someone else. Even though I haven't watch it yet, I know that there's only one female character who is almost the same age (in appearance I mean) and that is Kairo in Chimera ant form.

It looks like that Gon is having a nice relationship with her (or his) past self. So in summary, your question leads to a dead end.

11
Could Alluka completely heal Gon?
4
Why didn't Kurapika manipulate Uvo to tell him all the information about the Phantom Troupe?
3
Where is it mentioned that Gon didn't get his Nen back after being healed by Something/Nanika?
6
Why is Adult Gon Freecss' hair so long? Why is Illumi's hair long?
4
Kurapika's initial disrespect for Leorio, "Rewolio"