What is the combination of Wind Style and Earth Style?

I forgot to mention that there is one style, the Crystal Release, whose origins are unclear to me. It may be the response to the question, but I've got no proof or source to claim it. 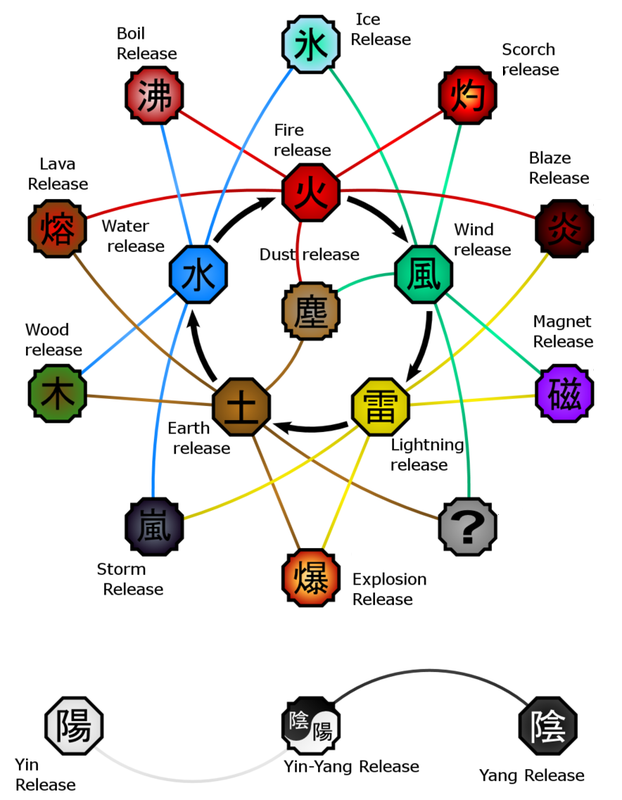 The effect you are asking for is not yet known, just like how some of the others in the chart are not confirmed or not complete (such as Blaze, Storm and Explosion).

The chart is set-up with the current knowledge we have of the techniques and filling in the blanks by deducing what could be in the slot. Most of them might actually prove to be accurate, but until this is confirmed in either the anime or manga we won't know for sure.

I just read your question and saw your graph. Got to say, nice work.

Though, I would make some changes:

As for your actual question, I would fill in the blank in the diagram with Sand Release. Let me explain my choice:

I know that Shukaku has the Magnet release, but the Mizukage proved that even a regular shinobi can have more than one Kekkei Genkai, so why not a Tailed Beast? Also there's the fact that the Third and Fourth Kazekage used their Magnet release to mimic Shukaku's sand. Although sand does have some magnetic minerals inside of it, these minerals will just slide past the rest when they come in contact of an actual magnet. So, in conclusion, my theory is that the Kazekage couldn't manipulate sand because it's not a magnet type element.

One may argue that the reason why the Kazekage didn't manipulate regular sand is because iron sand and gold dust is heavier. However, I would say that regular sand is more versatile and plentiful. There are oceans of sand, and they are not completely made out of metal. Sand is a mixture of all types of minerals that have been broken down to the size of a grain. In fact, Gaara himself once said that he uses his sand to dig underground, find the hardest minerals, crush them, and then mix them into the sand to make it stronger. Sand release makes more sense for Wind and Earth combination, since it's a product of weathering and erosion. So instead of being a magnetic type element, it's a deposition type element.

This doesn't mean that Gaara is weak compared to his predecessors. Since it's lighter, it's also quicker and more likely to be easier to control. Also, it's easier to produce, you can turn just about any kind of rock into sand. On the other hand, you can't turn sand or just any kind of rock into iron or gold without going through a molecular process. While his father used the gold dust to way Gaara down, Gaara could simply use his sand to gather the dust, take the infected sand, and bury it before making more sand from his environment. Of course, this all depends on who's better with their ninjutsu.

Wind Release and Earth Release make Magnet Release. Take a look at the combined nature transformation relationships image taken from wikia. The image is kinda small and blurry, don't mind if I modify your image to match wikia's image. 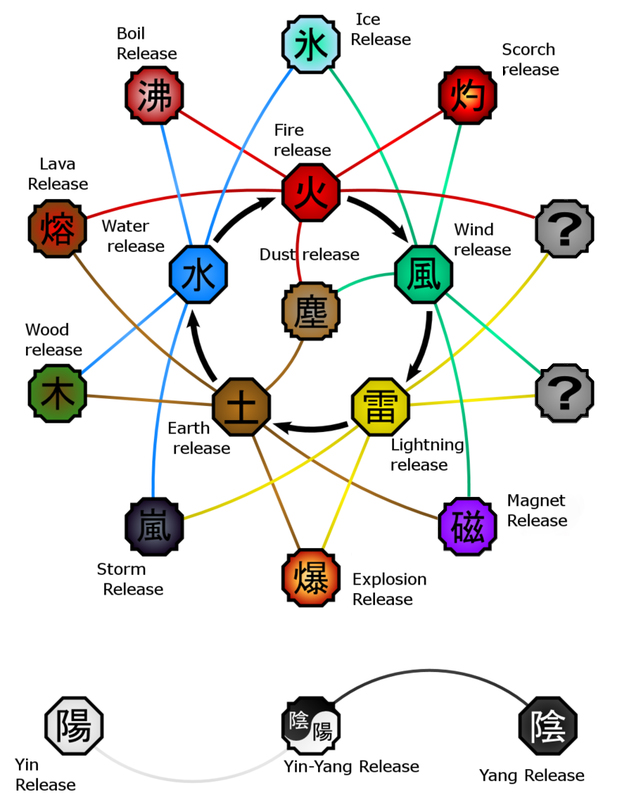 Well, the question has been answered, but I bet you still arguing about what's the replacement of Blaze Release and the old Magnet Release.

Blaze Release is a Kekkei Genkai, but it doesn't work with mixing one type of elemental chakra with another, like mixing Fire Relase and Lightning Release. In fact, it's a highest level Fire Release Ninjutsu, only acquired through wielding the Mangekyō Sharingan.

Wind Release + Lightning Release wasn't an official combination of Ninjutsu of forming a Kekkei Genkai, but it doesn't mean that the combination hasn't been used in Naruto Shippuden Franchise. In the game Naruto Shippūden: Ultimate Ninja Storm Revolution, Naruto forms a wind-natured Rasengan and Sasuke adds his Chidori to the sphere, forming Wind Release Lightning Release: Typhoon Lightning Spiral, a type of Cooperation Ninjustu, which means a collaboration of two or more Ninjutsu to create a new Ninjutsu with a greater strength.

Crystal Release though, Earth Release may be a presumed component element. For more information, go click the hyperlink.

There is no known technique that can be derived from the combination of Earth and Wind release but what I have is a theory:

The combination of Wind and Earth can be the following:

I don't include Magnet release because I have a very minimal evidence that the user of this style (Toroi and the two Kazekage) has Earth and Wind release. On the other hand, since Hiruko is the only ninja I know that has a Earth and Wind type elements release, he can combine the two elements to form a new release like the two I mentioned. I also presume that the technique/release is also a Kekkei Genkai.

Blaze Release is not a combination of Fire and Lightning. It's just Fire. Sasuke creates the black flames of Amaterasu with his left eye and controls them with his right eye, so it does not come from a combination of natures, but just a Mangekyo ability.

Swift Release is combination of Wind and Lightning, since both elements can be used to increase one's speed.

This is just a pure speculation, but, if you have a chunk of Earth, and you separate it into very small pieces and let it fly using Wind release, wouldn't that end up as Sand? Or at least sand-like. So I think the combination of Earth and Wind is Sand Release.

wouldnt it be crystal style? Since that's the only one not shown and sasuke doesn't use fire or lightning for his blaze style he uses his left to shoot the flames and the right to control them

2
How did Sasuke identify that Deidara's "art" uses Earth Style just by looking at his hand seals?
5
What is the relationship between the Byakugan, Rinnegan, and Sharingan?
2
How does wind chakra amplify water style?
1
Does Naruto only have the wind chakra nature?
3
How did Sasuke survive the Tsuchikage's particle style?
0
Can 2 elements be combined into a new release without a "clan based Kekkai Genkai"?
3
How do characters in Naruto train to use elemental jutsus besides the wind nature?
1
Why was lord Muu's fissioned clone not affected by the Earth Release: Ultra-Added-Weight Rock Technique?
5
How did Toneri Otsutsuki move the Moon towards the Earth?