What did Elsie type at the first try?

On first episode of The World God Only Knows Season 2, Elsie types something like a game, but her first try is wrong.

This is a picture of what she type: 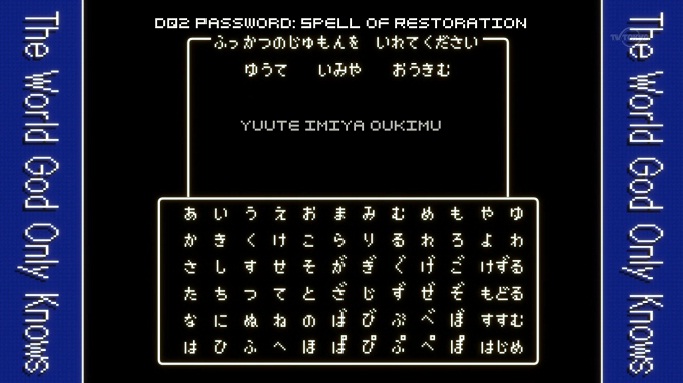 What did it says? And how can she mistype that? It looks really different with the right one, which is 'kami nomi zo shiru sekai' (神のみぞ知るセカイ), but I don't know anything about Japanese so I might be wrong and Google translate didn't help much...

The Spell of Restoration (復活の呪文, ふっかつのじゅもん, fukkatsu no jumon) is the name of the password system used in the Famicom and MSX versions of Dragon Quest and Dragon Quest II. Similar to other games of the time, the player's accomplishments were converted into a password, which was then written down and entered later to resume the game from the point at which the player left off. With the advent of battery backup (first seen in the series in Dragon Quest III), password systems became obsolete, and the Spell of Restoration was never used again. It differs from the passwords of other games in that it is recognized by some characters as a convention of the game world and not simply a means of resuming gameplay. 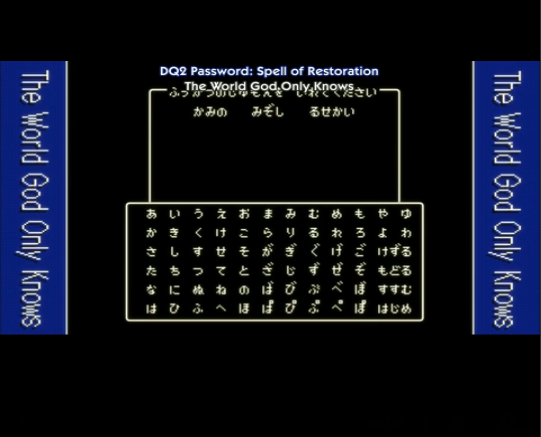 Due its broader scope (three-member party, multiple flagged plot events, and a wider array of equipment), Dragon Quest II employed a larger 52-character Spell of Restoration: Four lines of 3-3-4, followed by a final line of 3-3-4-2.

As to why she mistypes, it is most likely a reference to the fact you load a life. A life only you know of, hence The world god only knows, Keima's world.

Dimitri mx's answer has explained about the origin of the screen: it is Dragon Quest 2's password input screen.

As to why she mistypes, the input was actually part of a real, valid DQ2 password that's famous for its effect (in short: new game plus (Japanese YouTube link)):

It needs proper spacing to understand the background of the password:

8
What are the differences between the original and the light novels' story of The World God Only Knows?
14
What do the symbols in the OP refer to?
11
What does this haiku in The World Only God Knows mean?
8
What does Tenri whisper to Diana?
4
What are the drawbacks of being possessed by a Loose Soul?
6
What is the meaning behind the anime title "The World God only Knows"?
2
Did Elsie catch the runaway spirit (kaketama) that was in Nagase Jun?