Does Gajeel's motion sickness have anything to do with Pantherlily becoming his cat?

In the Chariot event, Gajeel becomes motion sick without understanding the reason. 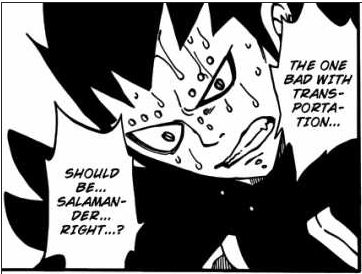 His case of motion sickness does not develop until the second day of the Grand Magic Games. So does this have anything to do with Pantherlily becoming his "cat"?

In the very same chapter when Gajeel still didn't understand why did he get motion sickness, Sting said to Gajeel (in Chapter 276, page 11) that "Well then... You finally got accustomed for it, huh... To being a real dragon slayer. Congratulations. Newbie."

Also, Laxus doesn't have an Exceed partner as far as we know and he has motion sickness too (Chapter 276, page 12).

I know this is really late and stuff, but on the Fairy Tail Wiki it says:

It seems that, for some reason, all Dragon Slayers of an advanced "level" suffer from severe motion sickness. At lower "levels", this isn't much of a problem, as shown with Gajeel prior to the year X791, having rode on both the Super Mage Giant Phantom MK II and the ship to Tenrou Island with ease. However, after three months of intense training, he, too, became vulnerable to motion sickness, having trouble running on a chain of vehicles during the Chariot event.

So maybe it's because he trained really hard and then it caused him to get to the advanced "level." And that might also be the cause for Wendy not having motion sickness, because she isn't at that level. Although that could also be because she has healing magic, but we still don't know so yeah.

During the chariot event Gajeel says he used to be able to ride on vehicles just fine, Sting replies saying that it just means Gajeel is a real dragon slayer now. I don't know if it has anything to do with getting an Exceed, it seems more like a matter of strength.

This is speculation but many wizards don't need to use transportation for their missions, they can just walk like Laxus. So the recent episodes say that all Dragon Slayers have motion sickness.

Wendy is probably an exception due to her healing abilities.

18
Does Hiro Mashima (Fairy Tail) have something in common with Eiichiro Oda (One Piece)?
16
Is there an explanation for Natsu's motion sickness?
2
Does Natsu still have access to his etherious form and can he still use Fire Dragon King Mode?