Why does Kimura Kaere always threaten to sue people?

At the beginning of her first appearance, Itoshiki Sensei explains about how foreigners always threaten to sue other people over the tiniest thing. And in a later episode Kimura Kaere often says she'll sue surrounding people after accidentally(?) flashing her panties, or anything that can be considered sexual harassment. Is this something like a parody about how Japanese see a foreigner? Or is this just simply her character? 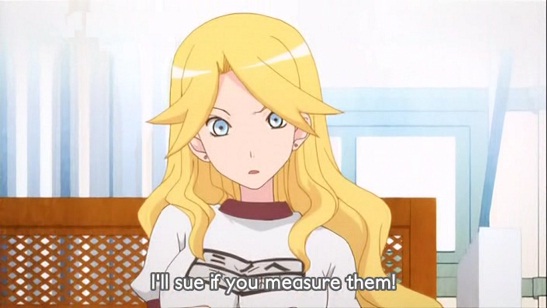 I'm pretty sure it's a foreign stereotype (mostly of the U.S.), that people over there will sue over anything.

Kaere Kimura, a half-Japanese, half-foreign girl from abroad, who embodies all stereotypes about foreigners.

She also has other stereotypical traits of foreigners and continually talks about how things are done in her country, which seem to get stranger and stranger as the show goes on. It's never revealed which country she is from though (and this is a running gag).

Her boisterous personality is also designed to contrast with the other side of her split personality, who is shy and quiet.

6
Why does Itoshiki-sensei always wear a kimono?