Is there an explanation for Natsu's motion sickness?

In Fairy Tail, Natsu is prone to getting sick whilst on modern transport. I am asking this question because it kind of annoys me when he gets motion sickness while fighting someone on board train or other forms of transport. These are the known forms of transport that he gets sick on such as...

It has not been explained, but it is likely due to a side effect of the Dragon Slayer Magic.

Wendy's Magic does not affect Natsu because he built up immunity. This was specifically stated by Wendy herself.

Also, Happy doesn't affect Natsu because Natsu doesn't consider Happy as a vehicle. This was also specifically mentioned by Natsu.

Edit as per the latest chapter: The motion sickness is caused due to inability of dragon slayer magic holder to adjust with the dragon's enhanced visual acuity which affects their semicircular canals. 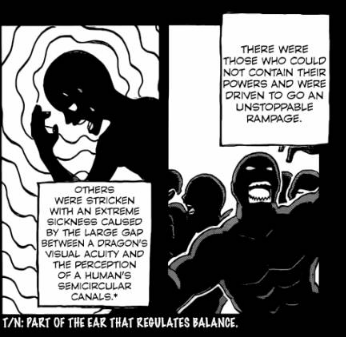 As an addition to Sp0T's answer, it seems like they have to be in a more advanced level of Dragon Slayer Magic to experience motion sickness. Just like Gajeel in Phantom Lord arc with their moving guild, and in Tenrou Island arc when they get to the Island by ship, he doesn't seems to have problem with motion sickness. However, just after his three month training for Grand Magic Tournament, he gets motion sickness.

In real life, motion sickness is caused by mixed signals from your senses, i.e. your eyes tell you the train isn't moving, as you are moving with it, however, your sense of balance feels all the bumps and swaying and tells you that you are moving. The result is confusion leading to nausea.

Putting that into the context of Fairy Tail, Dragon Slayers are shown to have heightened senses, Natsu more so than the others, probably because he is strong. So my guess is, stronger senses means stronger mixed signals and stronger motion sickness.

Sting said that when you become a real dragon slayer, you start to suffer the motion sickness. Maybe Wendy doesn't have it because she's not at that level yet, which means that Natsu has been a strong dragon slayer since the beginning and was stronger than Gajeel up until the episode 161 Chariot.

6
Does Gajeel's motion sickness have anything to do with Pantherlily becoming his cat?
10
What's the meaning of the spell's name that Wendy uses to cure Natsu's vehicle-sickness?
0
Is there a ranked order for the Phantom 4?
0
Is there an explanation behind the hidden blue Exceed/cat?
0
How come there are so many Dragon Slayers?
2
What is Natsu's Birthday?
2
Who are Natsu's parents?
0
Is Natsu's half-dragon form his complete Dragon Force?
2
Are there more than 12 golden keys in Fairy Tail?
4
Is Natsu's Etherious form still alive?