How does one, if it is possible, destroy a death note?

I know that the death notes have certain, almost magical, attributes to them (unlimited pages, the fact that you can kill someone by envisioning their face and writing their name down, etc). Given that, I was wondering if these properties apply to their destructibility too and if that was the case, whether Light's plan to burn the Death Note if someone opened his desk incorrectly would even have worked in the first place.

I remember in Episode 2 - Confrontation, Light and Ryuk are in a secluded area where Light explains to Ryuk how he will devise a way to prevent others from touching the death note, pouring flammable liquid on a book and lighting it on fire.

The purpose of the experiment was for creating a trap for the Death Note because Ryuk warns Light that if Saya were to touch the Death Note when she came in to get help on her homework, she would be able to see him. this blows Lights original plan to claim to have been taking notes as practice for becoming a detective should someone discover the death note.

Later in the Episode light is explaining to Ryuk back in his room about how he has hidden the Death Note, i can't be for sure what light says but he does say the explosion from his booby trap will "destroy the evidence" so he may be hinting that the Death Note would be destroyed aswell.

In the Rules it makes references to the Death Note being destroyed, in How to use LXII, it says

If the victim’s name has been written and then the Death Note is destroyed in the middle of writing the cause of death, the victim will be killed by heart attack in 40 seconds after writing the name.

Finally the second live action film of Death Note "The Last Name" however, when Rem dies from killing Watabi, to prevent Light getting his hands on another Death Note Rem destroys it aswell, however since the live action movies play out differently to the anime i'm not sure how close they are to the canon on how the Death Note works.

With all of this, it seems like the death note can be destroyed, however i'm unsure if How to Use: XXXI is still in effect if a page is ripped out before the note is destroyed, it is after Light creates this booby trap he starts to rip out pages and use them instead like when he was being watched 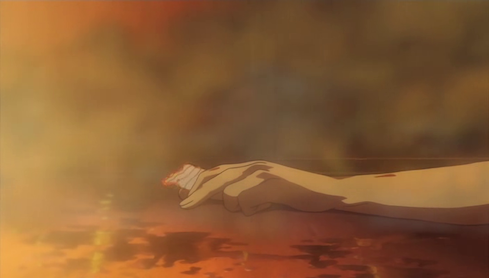