Can gold be transmuted in the Fullmetal Alchemist continuity?

In the Fullmetal Alchemist manga/2009 anime, we learn that alchemists must obey three rules:

Do not oppose the military

Do the transmute gold

Do not do human transmutation

Moreover, at one point in the early manga (probably chapter 3, according to Wikipedia), we see Ed transmute what appears to be gold from rocks, when he is duping Yoki into selling him rights to Youswell. (However, in the context of my question below, this might also be attributed to early-installment weirdness, since in the corresponding episode in the 2003 anime - episode 9 - I think we see Ed giving Yoki rocks that have been coated with gold from coins Ed got from Yoki.)

Both of the above seem to imply that transmuting gold is possible in the FMA universe, yet this seems to be contradictory given some other manga details. In the first chapter, we learn from Al that with alchemy, one can only transmute like from like. Being me, I read this to imply that the sort of conservation of mass alluded to when chemical equations are balanced generally applies in terms of what alchemy can do the FMA universe (at least in the more practical, mundane examples we see in the manga). (On a second read, I'm really not sure if that's a "correct" interpretation.)

Thus: is transmuting gold actually taken to be something possible in the FMA universe (or is it even possible to come to a conclusion about this)?

Yes, transmuting gold is possible (at least in the manga). The reason why it's forbidden is stated later in the series: It's forbidden so nobody can destroy the economy by making the gold worthless.

The mass is also conserved, I see no problem there. A ton of coal makes a ton of gold. Equal mass :).

Note: In the first adaption, Ed did not transmutate gold but instead coated the coal in gold. Either it's not possible in the 2003 anime or he didn't want to violate the law. (Thanks to キルア)

When the Elric brothers go to Youswell in the beginning of the 2003 series. They don't actually transmute coal into gold, but rather Edward uses the gold coins that Yoki bribed him with to cover the coal. 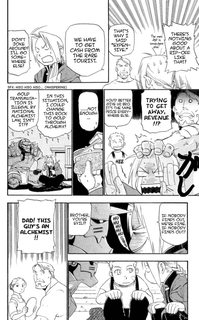 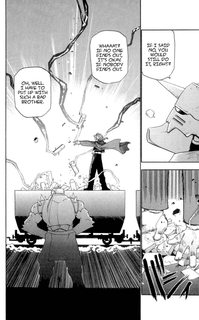 And then here he really does transmute coal into gold, which he later gives to Yoki (and performs a reverse transmutation...)

Gold on the periodic table is Au.

Simply put so long as we are talking about taking apart and rebuilding compounds one would only need to separate gold from any existing compounds. This is suggested in several episodes, yet still, it is never made explicit. This would mean that no. It is not possible to create gold from compounds not containing Au.

Au is actually kinda rare in everyday items. Seawater contains a small amount of it, yet most things that use gold use gold in it's purest form to conduct electricity.

If it is deconstructing atoms to base protons, electrons and neutrons and reordering them to have the properties of AU then yes it is possible and easy. It is suggested that this isn't the case but the existence the "law of equivalent exchange". No alchemist would need any specific ingredients because they can create pretty much anything out of anything else.

So the correct answer. Shrug Full metal alchemist doesn't let real science get in the way if it's fun. Which is a good thing.

It's important to remember that alchemy in FMA follows the Law of Equivalent exchange... Essentially a more lenient version of the 2nd law of thermal Dynamics.

Mass is not the only ingredient conserved, energy must be conserved as well. Transmutation of rocks into differently shaped rocks can be accomplished with the geothermal energy available in the environment or Philosopher's Stones but changing the composition of elements would take orders of magnitude more energy.

Perhaps why such exact ingredients are required for human transmutation is to avoid a rebound... Or make them less likely.

Of course any mining castoff should contain a large enough amount of Iron and Sulphur to produce loads of Pyrite, if that energy wasn't available.

Yo, guys. I'll try to clear some of this up. In the manga(and as I see it, the true canon, being that it was made first) Ed turns Sludge(coal dust in ViZ version) in to Gold. As stated earlier, Sludge has trace amounts of metals in it, being that it comes from mining coal, and being that coal is under ground, where we find metal, it is possible to convert coal sludge in to gold. More difficult than just straight up metal, since you can never tell how much metal is in the sludge without a proper examination, which Ed never did. Again, this is all based on the manga, being that it was the original story and ultimate source if you can't consult the author. I hope this cleared it up at least a bit, thanks for reading.

8
How does the state know when people transmute something into gold?
-2
How did Edward Elric transmute a car with different colors than the original one?