Are any of these One PIece characters based on real people like this image suggests?

I found this One Piece picture on a friend's wallpaper and became curious whether any of these characters were really based on the people they're paired with (as confirmed by the production itself) or if this was just a product of a person's creative imagination. 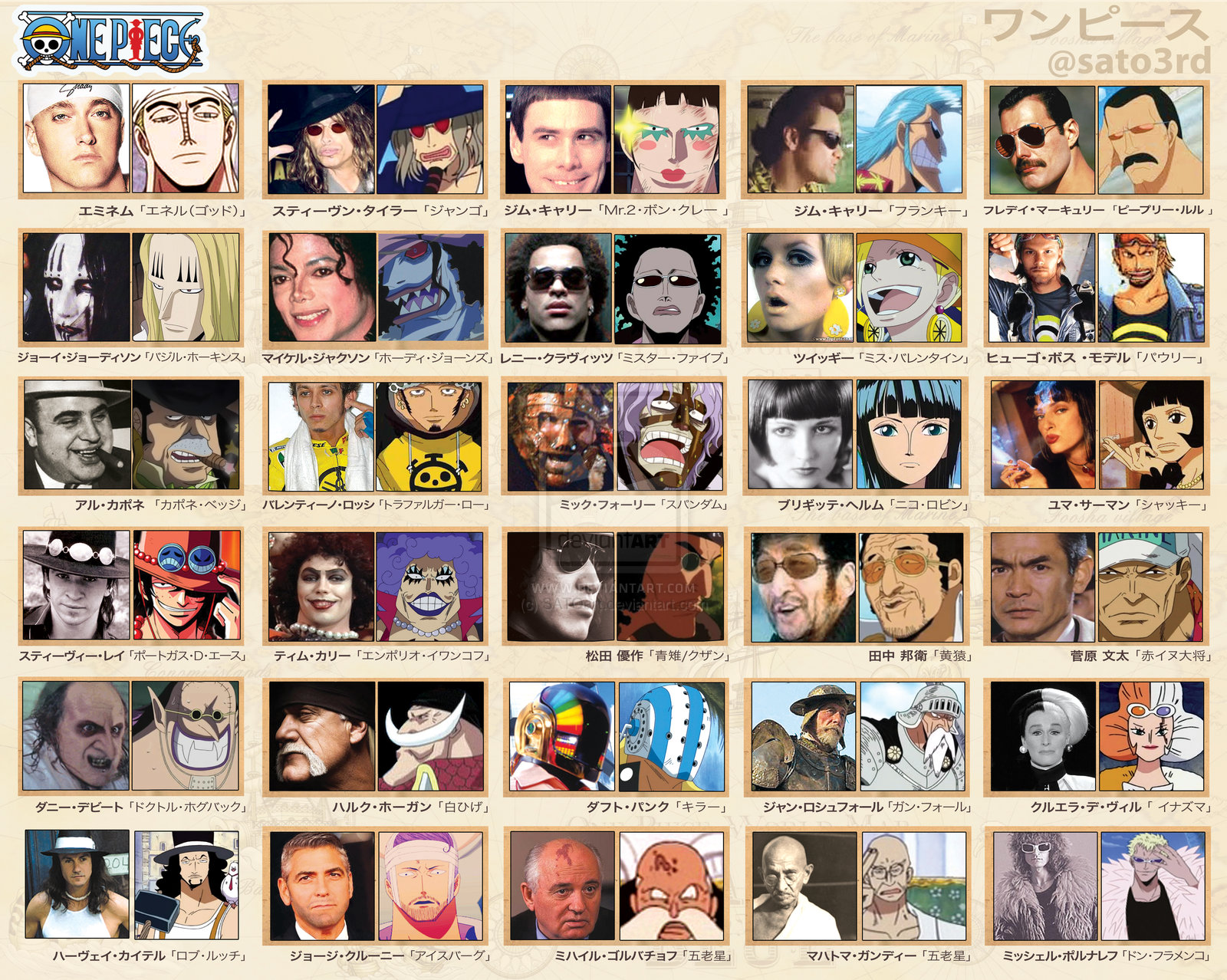 PS. I don't watch One Piece so I'm pretty clueless. Forgive me for that. lol

Active Oldest Votes
4
Want to improve this post? Provide detailed answers to this question, including citations and an explanation of why your answer is correct. Answers without enough detail may be edited or deleted.

I can't validate the genuineness of the link contents, but this is what I could find: Character Inspirations for Oda.

Aokiji/Kuzan
Kuzan has been confirmed to be based on the late actor Yasaku Matsuda. One of the characters the actor played even had similar hairstyle, clothing and sleep mask design. Kuzan's birthday is also based on Matsuda's. Kuzan's nick-name (Aokiji) is taken from the Momotaro Legends.

Akainu/Sakazuki
Akainu has been confirmed to be based on the famous Japanese actor, Bunta Sugawara. Akainu's real name, Sakazuki is apparently based on the three movies of Bunta Sugawara with "Sakazuki" in the title. Akainu's birthday is also based on Sugawara's. The name "Akainu" is taken from the Momotaro Legends.

Basil Hawkins
It has been confirmed that Hawkins' name is derived from a real life pirate and a navigator. His given name came from Basil Ringrose, while his surname came from John Hawkins.

Boa Hancock, Boa Sandersonia and Boa Marigold
The three sisters are based on the Gorgon Sisters from Greek Mythology.

Capone Bege
It has been confirmed that Capone Bege is named after the real life 1920's gangster, Alphonse "Al" Capone. His inspiration is both from Capone as well as the English privateer, William le Sauvage. He also shares his birthday with Al Capone.

Emporio Ivankov
Is confirmed to be inspired from The Rocky Horror Picture Show. Specifically, Ivankov's look is based on Tim Curry's Dr. Frank-N-Furter role. His tendency to call people "candies" could be a reference to a line from the Rocky Horror song 'Sweet Transvestite', "...he thought you were the candy man." Another similarity the two have is the fact that they can both turn men into transvestites.

Enel
Is based on a Japanese mythological "thunder god" known as Raijin.

Eustass Kid
It has been confirmed that Kid is named after a real life pirate, William Kidd, who was also nicknamed "Captain". His surname is taken from Eustace the Monk, another real life pirate.

Fujitora/Issho
Fujitora has been confirmed to be based on the Japanese actor Shintaro Katsu, more specifically his role as Zatoichi, the blind swordsman.

Hannyabal
Although not confirmed, many believe Hannyabal is based on the the Hannya mask.

Jewelry Bonney
It has been confirmed and Bonney is named after the real-life 18th century Irish female pirate Anne Bonny, a noble turned pirate, who operated in the Caribbean.

Kizaru/Borasalino
Kizaru has been confirmed to be based on the Japanese Actor Kunie Tanaka, Kizaru's clothes, real name (Borsalino) and birthday, are apparently based on a movie character that Kunie Tanaka played in his youth. His nick-name "Kizaru" is taken from the Momotaro Legends.

Sabo
Is possibly inspired by Artful Dodger, a character in Oliver Twist by Charles Dickens. The characters share similar style's of clothing (top hat, sleeves, etc) and they are both of "mischievous" group of children.

Sanjuan Wolf
Known as the "Colossal Battleship" is possibly based on the Spanish Battleship/Warship San Juan Nepomuceno. The warship also participated in the "Battle Of Trafalgar".

Scratchmen Apoo
It has been confirmed that Apoo's name is derived from real life Chinese pirate, Chui A-poo.

Sentomaru
Is possibly based on the Japanese folklore hero Kintarō (also known as samurai Sakata no Kintoki), who was notable for wearing nothing but a bib, carrying a massive axe, and sumo wrestling with bears. Additionally, his attack, Ashigara Dokkoi, is a pun on Mt. Ashigara, the place where Kintaro was raised.

Shiliew
Is possibly inspired by Yasunori Kato, a fictional character.

Trafalgar Law
It has been confirmed that Law's name is derived from real life pirate Edward Low. Law's apparently infamous cruelty echoes Edward Low's own reputation for violently torturing victims before killing them.

Whitebeard and Blackbeard
Both are inspired by real life pirate known as Edward Teach. Whitebeard's character design and traits are also confirmed to be based on the owner of the pub Oda liked going to. The owner often sat down in the store with medical equipment hooked up to his nose and drank, calling sake "medicine" while telling war stories.

Whitebeard's own line in his first appearance, "I'm not talking to any snot-nosed airheads." was in fact an exact phrase the owner often said to customers. Unfortunately, the pub owner passed away by the time Oda revealed this fact.

Urouge
It has been confirmed that Urouge's name comes from the real life 16th century Turkish pirate, Oruc, one of the Barbarossa brothers.

X Drake
It has been confirmed that Drake's name is based on real life privateer, Sir Francis Drake.