How do Luffy's Gear attacks work?

Might just be me missing an explanation part in the manga, or just not properly understanding at the time. But how does Luffy's Gear 2nd and 3rd attacks work? 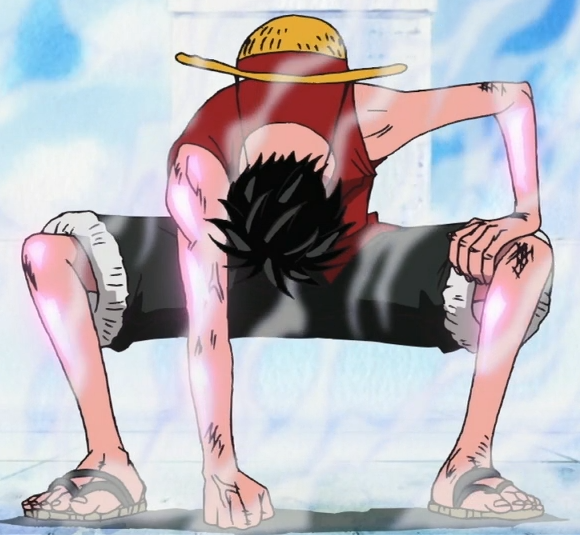 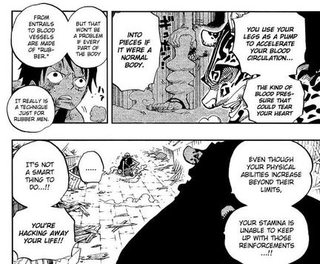 With gear second, Luffy increases his blood circulation by pumping his blood through his body at higher speeds than normal. A normal human wouldn't be able to withstand this kind of pressure on its veins' walls. If Luffy wasn't a rubber boy, they would burst. The increase in blood flow results in a higher discharge of red blood cells, which provide the human body with oxygen and nutrients. The additional oxygen and nutrients would make the muscles work more efficiently and thus result in higher speed and power. In sports this process is called blood doping. In blood doping, the discharge is increased by adding additional red blood cells, which were extracted at an earlier time, instead of letting them flow faster.

Gear second also comes with side affects. The extreme oxygen usage would result in an acceleration of his breathing and the increase in his metabolism causes him to be hungrier than usual or even have a paralysis type effect after prolonged use of it, like in the second fight with Rob Lucci. Due to the acceleration and thus friction inside his body, he turns quite hot, which results in his sweat evaporating right off his body. This explains the smoke and redness of his skin.

Luffy obviously needs to keep pumping or the effect wears off. As it would deplete his energy storage quite rapidly, he doesn't use gear second constantly during fights. The increase in metabolism might also affect his life expectancy as mentioned by Rob Lucci. 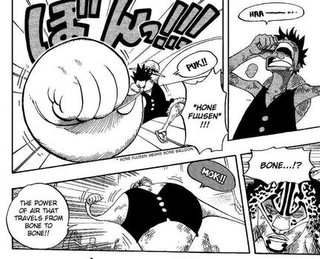 With gear third, Luffy bites into his thumb joint, making a small opening, and blows very hard into it, which inflates his arm. He blows the air inside his bones and since our skeleton fully connects all our joints, he can then rearrange the amounts of air as he pleases through his body, without releasing it accidentally. Luffy basically pushes the air towards his hands, stretching his body, but also increasing the air-pressure. This would result in Luffy having a larger area of attack (eg: the size of a giant's hand), and an increased hardness due to the air pressure.

After the time-skip we can see how Luffy decreased the size of his arms, but focused solely on the point of contact. He pushed all the air in his hands, increasing the air pressure and thus hardness of his attacks. The air in his arms would be wasted otherwise anyway. Also since it is air he is carrying, it doesn't cost him much additional strength to move those large hands, but the additional damage done due to the vast increase in area of attack is well worth it.

Gear third also comes with side affects. Before the time-skip, we could see Luffy become tiny after using this attack. After attacking, Luffy blows out all additional air, resulting in a rapid decrease of body size. The rapid decrease and massive amounts of energy needed to inflate and keep the air where he likes it, makes him unable to retain his original size. I think it is mainly due to the energy he needs to position the air where he wants and keep it there, since Luffy didn't shrink after using his balloon attack. After the timeskip and training with Rayleigh, Luffy became strong enough to keep his body intact after using the 3rd Gear. 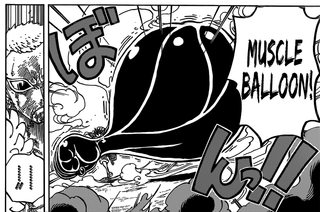 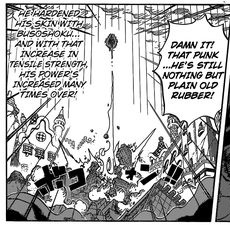 With gear fourth, Luffy, similarly to gear third, bites down on his body and blows air inside. The difference this time is that he bites down on his forearm and blows air into his muscles instead of his bones. By having air inside his muscles he can control their expansion and contraction and can thus control his muscles by displacing the air inside of them. People's muscles aren't as strong as their bones though, so if a normal person or even a normal rubber man would blow such amounts of air inside his muscles, they will explode due to the massive amount of pressure. That's why Luffy can only use gear fourth when coated in Busoshoku Haki.

He then uses his Haki coated body, to further increase his manipulation over his body. By changing the amounts of Haki he manipulates the elasticity of his rubber. As a child you might have played around with rubber bands, and you might have noticed that the harder the elasticity, the harder the rebound will be. This is exactly what Luffy uses with his attacks. Before Gear Fourth, Luffy would throw his arm back to increase tensing, but now similar to Bellamy's Spring Fruit, he pushes his arm inside creating tensing, letting it hit the opponent much harder and faster. 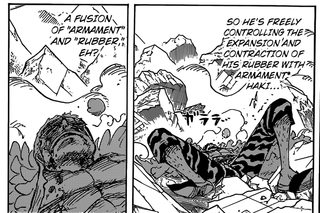 Having such great control over his Haki and his rubberiness, Gear Fourth has another advantage. Luffy can now bypass other people's Busoshoku Haki as mentioned here. Luffy was hit by Doflamingo, yet Doflamingo's attack bounced right off. By fusing Haki with rubber, he is now freely controlling the expansion and contraction of his rubber despite what the other person throws at him.

Gear fourth also comes with side affects. The usage of such amounts of Haki comes at a price (as can be read here). Therefore, at the time of writing (chapter 787), there is a time limit to using Gear Fourth. Luffy can only use Boundman for 20 minutes and after that he is rendered unable to use any Haki for 10 more minutes. Another problem with having inflated muscles is that they become bouncier and thus making Luffy incapable of just standing still on the ground. Although this might change in the future, similar to the other gears. Luffy has overcome his other side-effects so he might overcome these ones too.

Gear 2nd:
He circulates more blood in his veins by using his legs (or arms) as a pump. This fast blood stream would shatter blood veins of a normal human. But since Luffy's body acts like "gomu", his veins stretch and make this possible.

Gear 3rd:
He bites a part of his body (usually his finger) to open a hole there. Next he inhales huge amounts of air into his lungs by stretching them. Then he blows this wind through the hole he opened to bloat up his body. So that his body looks bigger.
Of course, by doing this his body mass wouldn't increase very much, so he shouldn't be able to throw enormously powerful punches in real world dynamics as animated.

It's explained right there in the manga, and it's due to Luffy's rubber body

To add to the other answers here, it's important to note one of the reasons why Gear Second works - one of Luffy's Required Secondary Powers is to generate excess blood as he needs it. (This is how he can expand his limbs without oxygen starving any tissue/drastically changing his blood pressure/etc.) From TVTropes:

Luffy can bleed so much without dying because one of his secondary powers is a circulatory system that can make extra blood instantaneously to pump into his stretched out limbs. In fact, his rubberized organs, bones, and indeed every single vital part of his anatomy is the only reason he is able to withstand the stresses inherent in his Gear Second Super Mode. According to Rob Lucci, if anyone but Luffy were to use something like Gear Second, their heart would explode.

9
Does the size of a person matter when Devil Fruit powers are involved?
16
Why does Shanks already have his scar at the beginning of One Piece?
3
How did Diamond Jozu lose his arm?
2
How does the work relation between Shichibukai and the World Government?
3
How do Logia powers work?
4
Why can Devil Fruit users use their abilities while wet?
2
Does Luffy have "Gomu Gomu no Jet Yari"?
1
Knowledge of Gear 4th through the world
3
Who is Luffy's first mate?
4
Is Gear Second still damaging Luffy?