What exactly is a guild mark?

All guild members have a mark of their guild, what exactly are they? Is it just a regular tattoo or is there some kind of magic contract? 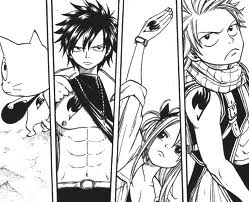 Guild Mark is a kind of magic contract which is printed magically on each guild member. It helps in identifying a mage's guild.

Sometimes it can be used to perform group magic, for e.g., during the Tenrou Island Arc the members of Fairy Tail combined their power against Acnologia to defend against its attack.

Also, during the Grand Magic Tournament Mavis says only those having the Fairy Tail guild mark are able to see her.

7
Is it possible to have 2 guild marks?
1
Can a guild mark be forcefully applied?

7
Is it possible to have 2 guild marks?
1
Can a guild mark be forcefully applied?
8
How is a guild mark removed?
2
Did Mest have a guild mark?
1
Why was Happy and Carla affected by Azuma's take over of Tenrou Islands magic?
9
What dictates who can use what magic in Fairy Tail?
7
What are the processes involved betwen job submission and rewards?
2
How durable is Natsu Dragneel?
0
How come there are so many Dragon Slayers?
0
Why did Warren need to invent communication lacrimas?