What events usually happen at Comiket?

I only know Comiket from anime and manga: they usually sell their own doujinshi and do some cosplay.
Is this the only thing that actually happens at Comiket or are there a lot more things that happen? Maybe some kind of contest or something?
Also, does Comiket only exist in Japan? Is it different from Comic-Con?

You are correct: Comiket is the world's largest convention for selling/buying doujinshi, and includes cosplayers. However, it is not an anime/manga convention and as an experience is pretty much nothing like Comic Con or similar conventions to Comic Con such as Anime Expo.

Yes, Comiket only exists in Japan, as over 550,000 Japanese doujinshika (a.k.a. doujin artists) gather to sell their self-published works. It is held at Tokyo Big Site (in Tokyo) twice a year, in summer (called Natsucomi) and winter (Fuyucomi).

What Happens at Comiket

Comiket is almost entirely comprised of Japanese doujinshi circles (a circle is a group of artists) and individual doujinshika selling their doujinshi comics, light novels (in other words, fanfiction), and some "merchandise" of their artwork such as laminated cards and posters. Some of their works are based on real anime/manga series, whereas others are completely original self-published content. About 90% of these are explicit hentai. Only about 10% are non-graphic; of these, a fair percentage are doujinshi created by student clubs at Japanese universities (the quality of the art varies, but is generally well below that of what you may be used to seeing produced by prominent doujinshika). 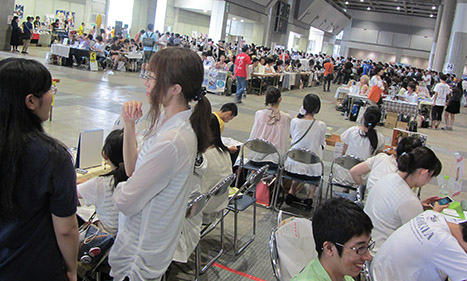 Aside from shopping for doujin works, there is not much else to see/do.

Although you can see cosplayers walking around doing their own shopping, many Japanese are shy, photo averse, and/or concerned about privacy, so there is a rule that you should not take any cosplayers' photo outside of the designated cosplay arena. Only when cosplayers are within the boundaries of this area are you allowed to photograph them. Even within this area, they mill about and do not necessarily pose for you to have their photos taken. This is a big difference from cosplayers at conventions outside of Japan who are often delighted to be stopped and asked for a photo. There may be a cosplay competition but I don't recall one being heavily promoted.

The line to get to the cosplayers area (in sweltering Tokyo August humidity): 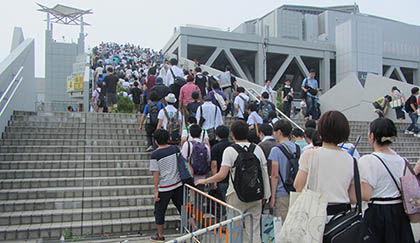 There is only one room of vendors promoting licensed anime/manga/gaming titles, but 1) it is not very big, 2) almost all of the titles represented are niche (not well-known outside of Japan), 3) not much is available to purchase, since most of these booths are run by the production company or publisher to generate interest in an upcoming title (last year, most were bishoujo or bishounen titles. You will not see any Naruto, One Piece, Pretty Cure, Pokemon, or other mainstream stuff here, and definitely nothing of series that have already ended), 4) extremely few freebies are handed out at the vendor booths, and 5) none of the booths are retail stores/online shops. You can't find figures, trading cards, t-shirts, and that sort of stuff for sale here.

Although I had heard Comiket (inaccurately) described as the largest anime/manga convention in the world, in reality, the licensed anime/manga content constitutes less than 5% of the entire convention. You could go to Animefest in the Czech Republic to find more to do and buy of actual anime/manga than you'd find at Comiket.

Interestingly, there is one hall that features about 20 booths of handicraft sellers who sell all manner of handmade stationery items and decorations. Most of their merchandise has no connect to doujinshi/anime/manga. I bought a squirrel clothespin magnet.

Comiket differs dramatically from Comic Con in the following ways:

Not the answer you're looking for? Browse other questions tagged culture conventions comiket .

7
What is COMITIA? Is it different than Comiket?