Why was it that Light's father could see Light's lifespan, while Mikami couldn't see it (which allowed him to deduce that Light was Kira)?

I was talking with a friend about Death Note and he said that he could't understand one thing:

Is this actually a slight mistake in the story, or have I missed anything? (It's probably the second one)

In chapter 71, Light was setting up a plan that would prove himself to be innocent of being the killer (Kira); would give the NPA (National Police Agency of Japan) the advantage over Mello; and would keep him safe if Mello would ever get hold of his picture.

In order to kill Mello, he made preparations for a raid to take place at November 10 at 23:59. Almost everybody in Mello's organization would die, but in order to kill Mello himself he needed the help of the NPA. He sent them the Death Note together with Ryuku, making it possibly for one of the NPA members to bargain for the Death Eyes. He had expected Matsuda Touta to do the deal, since it went with his character, but in the end it was his father, Soichiro Yagami, who made the deal with Ryuku. With his father having the Death Eyes, it would be impossible for him to be owner of any Death Note, and therefore, he had relinquished ownership himself, instead of making Misa relinquish ownership over hers. Also he knew it would be dangerous to be the owner of any Death Note, since he knew Jack Neylon aka Kal Snyder had the Death Eyes and it would be as easy for Mello to kill him as it would be for Light to find and kill Kal Snyder. Of course, he was not going to stop being the killer (Kira) soon, so to retain his memories he strapped Misa's Death Note to his body. By doing so, he thought he would be able to kill Mello and prove himself innocent once again for the NPA. He failed to kill Mello through this raid, though. 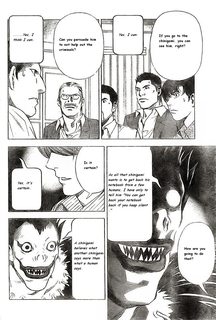 In chapter 72, you can see that in addition to what I said above, Light also needed Ryuku to be there at the raid, to stop Sidoh from helping the "mafia". He knew Ryuku would be so kind as to harass Sidoh a bit ^^. 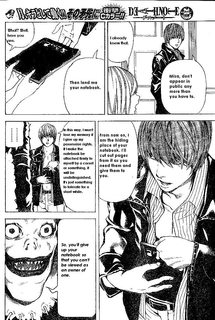 In chapter 74, you can see Light holding the Death Note when his father dies. After an owner dies, the ownership will go to the first person that picks up or touches the Death Note, and therefore Light becomes the owner again. 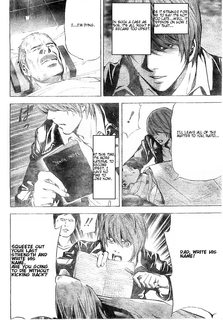 In chapter 81, Misa is ordered to relinquish her ownership to Teru Mikami. At this point there are two human Death Note owners and they are Light and Mikami, and Misa becomes an ordinary housewife. Therefore, Mikami is able to identify Light as the owner of the Death Note and the real "Killer". 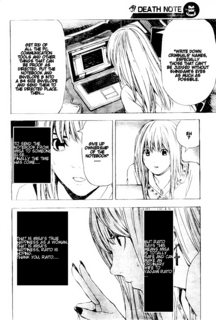 For a summary of the Notes' owners the website provided by Maroon is really useful. See here.

Note: I don't remember the specifics of Death Note too well, so while the general idea of my answer should be correct, I'm not sure about the specifics. I used a couple of sites (mostly this one - see the second arc) as references.

At some point (probably somewhere in episodes 27-29) before the attempt to kill Mello and the attempt to recover one of the death notes, Light gave up ownership of his death note, but manages to prevent himself from losing his memories of it. (The forum I used to cross-check with my memory states that he strapped one of the other death notes to his body, though I don't remember whether or not this happened, at least in the anime.)

Since people who own death notes will not have their lifespan seen by those with shinigami eyes (and since those who don't will have a visible lifespan), this prevented Light from being seen by his father as a death note user. (When I watched Death Note, this struck me as possibly an anti-detection measure taken by Light, but again it's been a while since I've watched Death Note.) After his father is out of the way, however, and none of the other task force members are death note users, this isn't necessary, and Light regains ownership of his death note by taking the one his father was supposed to use.

Here's the relevant portions of text from the link I gave:

Shidou decides he wants his DN back, so he comes to the human world looking for it and comes across Mello.

At the same time, Light has Ryuk possess DN3, relinquishes control of DN3 and then sends him and DN3 to the Japan HQ in the name of Kira. Souichirou volunteers to become its new owner and possess the Shinigami eyes.

To make sure he doesn't lose his memories, Light has DN2 secretly strapped to his body.

After his father's death:

DN1 was recovered, but at the cost of Souichirou's life. Light regains ownership of DN3. As DN1 is of no use to him, he returns it to Shidou, and DN1 is no longer relevant to this story.

21
Couldn't Misa have told Kira L's life span?
12
How long did Light's father have to live?
5
Why was Ryuk tied to Light's Death Note?
1
How could Beyond Birthday read lifespans?
8
Why didn't Light kill Mello?
3
Can a person do the shinigami eye deal without losing half of his lifespan?
3
Raye Penber's fiancée's part opens up a loophole in DeathNote
1
How did Light went unnoticed by his dad?
4
Why was Light only targeting Japanese criminals when he was in the US?
4
Before Mikami committed suicide, was he still having faith in Kira?