Is Magi based on religion?

I started reading the manga Magi recently and can't help but get the feeling that it is based on Islam.

I couldn't find anything online, and neither do I have enough knowledge about the religion to really confirm this either.

So is the story of Magi based on Islam? Or does it use certain key points from this religion?

Precaution: The following may contain spoilers from Magi

This was too long to be posted in comments so I had to make it here and since it serves the purpose too, why not.

So I did a bit of research after the few pointers given out by Dimitri.

On the reference manga page given by Dimitri, I found this: 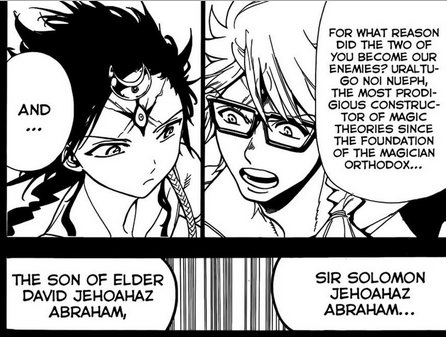 After looking up the two names David and Solomon, I found the interesting:

Solomōn), also called Jedidiah (Hebrew יְדִידְיָהּ), was, according to the Book of Kings, the Book of Chronicles, Hidden Words and the Qur'an[2] a king of Israel and the son of David. 1

Book of Chronicles are the final books of the Hebrew Bible.

When you search about Solomon in Islam, the first line you see in wikipedia:

Solomon (Arabic سليمان Sulaymān) was, according to the Qur'an, a king of ancient Israel as well as the son of David. 2

Solomon in Islam is more usually called as Sulaymān and David as Daud or Dawud.

The name Jehoahaz also seems to have a reference in the Bible, but not the Quran. So judging from the names used in the anime, they might be relating it more to Christianity.

More information about the names here

And about the Ilah:

ʾIlāh (Arabic: إله‎; plural: آلهة ʾālihah) is an Arabic term meaning "deity". , it simply means deity in Arabic. So you might be confusing it with Allah who is the God of Muslims.

Summing it up, we can say that Solomon's identity and his Father, David's identity has been taken from religion (more like Christianity) but most part of Magi is derived from fictional characters.

The short answer is no. It is not based on the Islamic religion. It is based on a several middle eastern originating stories and historical characters.

The main characters names such as Ali Baba and Cassim are from 1001 Nights also known as the Arabian nights. Sinbad is also a character from a series of arabian stories. Solomon was a real king back in 970BC.

Basically what they have done is pulled in several popular names from Arab stories and literature and Middle Eastern history and mixed it in with their story. I'm too new to link more references, but you get the idea.

I am Muslim and my answer is, no it's not based on Islam. The culture in Magi was based on the Middle East before Islam.

Jenn, magic, and harem were very common at that time and thousand of stories talked about jennies talking and serve people, and some people were practicing real magic.

There are some events that have been taken from Qur'an as Solomon story and how Allah gave him the power to control jennies and animals.

I'm guessing Magi takes place in Iraq which used to be a Christian country.

Balbadd is based on Baghdad, if it wasn't obvious enough. Sinbad, Morgiana, Alibaba, and Aladdin are all from Iraq according to the Arabian Nights story. Also, the architecture is just like Iraq and what the background characters wear are based on traditional Iraqi clothes.

sadssads
1
1
Add a comment  |
Highly active question. Earn 10 reputation (not counting the association bonus) in order to answer this question. The reputation requirement helps protect this question from spam and non-answer activity.