Why did Luffy ring the bell 16 times?

I'm confused as to why Luffy rung the bell 16 times. A navy member said it's a declaration of war whereas a pirate said it's about the change of an era. Can someone please explain what exactly is the reason behind it??

The bell is called the Ox-Bell.

What does the ringing of the bell signify?

The ringing of the bell signifies the end of one year and the beginning of another. It is rung eight times to give thanks for the old year, and another eight times to welcome the new year. If it is rung twice, it signifies some sort of disaster or distress.

How others interpreted 16 rings:

Lieutenant Commander Brandnew of the Marines analyzed it as a declaration of war, and Killer of the Kid Pirates interpreted the meaning of it as the end of one era and the beginning of another. 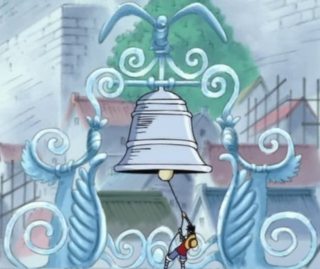 The real reason behind it:

Luffy's ringing of the bell was only a distraction, along with his other actions, so nobody in the world outside of the Straw Hat Pirates would notice the real message; in the picture of Luffy after ringing the Ox Bell, a mark is seen on his arm that reads 3D2Y with the 3D crossed out, representing the amount of time the crew would be separated.

16 bells, rung on a ships bell by the youngest crew member at midnight on the 31st December, ring out the old, ring in the new, as 8 bells signify the end of a watch and the beginning of another one, so it is with the years end/ beginning.

4
Why doesn't Donflamingo control Luffy?
5
In which episode did Luffy say the following quote?
10
Why did Luffy react to Nami's body, but not to Hancock's?
5
Did Luffy know who Sogeking is?
10
What are the similarities between Gol D. Roger and Monkey D. Luffy? Are they related by blood? What are their relatives' ages?
5
How did Luffy get the scar on his chest?
5
How did Luffy beat Katakuri?
3
Why did Luffy not command the Straw Hat Grand Fleet against the Big Mom Pirates?
1
Did Luffy really kill Arlong?
1
Nami's message in Strong World movie