How many nations are there in the Naruto universe?

How many total countries are present in the Naruto universe, including small or less significant ones? Are there only the five nations which participated in the war?

There are for sure more than the big five nations. I never watched a single episode of Naruto, but I will try to provide an answer here. You only ask for the nations, but I will add a list of the villages too. 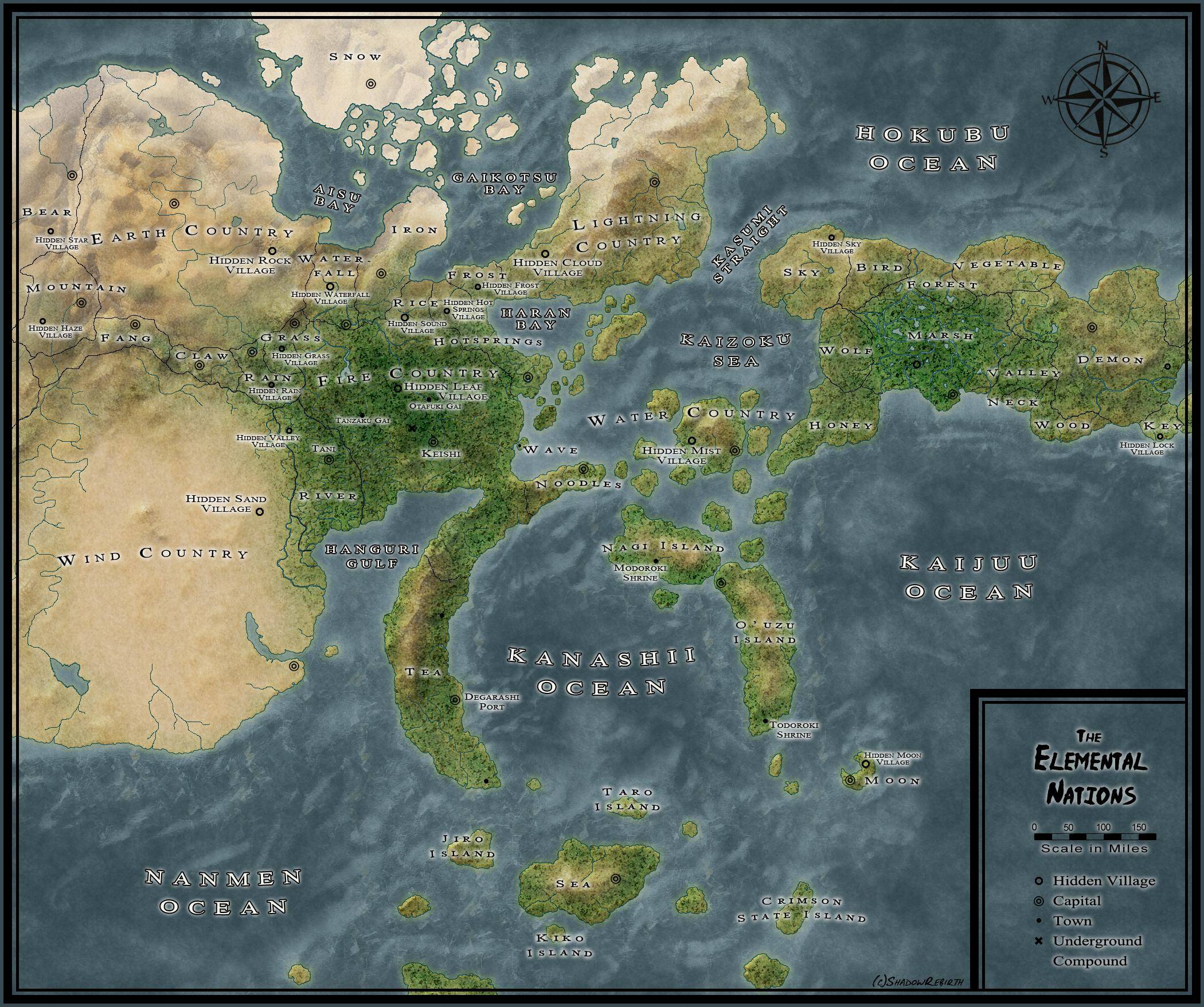 This map is made by xShadowRebirthx. This is not a official map and also some places could be differ from the original! Click on the image to enlarge the map.

The countries in Naruto operate as separate political entities and are presumably all monarchies, ruled by feudal lords who stand equally in rank with the hidden villages' leaders.

Five of the countries are considered to be the most powerful and influential of them all.

The country is mostly comprised of desolate, rocky areas. The border of the Land of Earth runs along a rocky mountain range, blocking communication with other countries. The wind blowing from the north passes over these mountains, carrying small rocks from the Land of Earth to the surrounding countries.

The Land of Fire is appropriately oriented towards the element of fire, typically having very bright and warm weather. While not the physically largest country, it has the largest hidden village.

In the centre of the country are vast mountain ranges, whose many thunderstorms are said to give the country its name. From these mountain ranges, many rivers flow to the sea, creating a very crooked coastline that displays an impressive oceanic beauty. There are many hot springs located within the country.

The country's weather is typically cool and the islands are usually covered by mist. The islands themselves also feature many lakes. The nation is oriented towards the element of water.

The country covers a vast realm, but that realm is largely composed of deserts. Because there is very little rainfall throughout the year, the people of the country live in villages built on one of the desert's many oases. Despite the country's extremely harsh environment, it has a large population.

So there are all countries listed, here are four more of the bigger ones

I also found some other wich I could not assign to a catagory. These are the Land of Grass, Land of Rain, Land of Read Beans, Land of Rice Fields, Land of the Waterfall, Land of Udon and Land of Waves.

Shinobi villages, or also called hidden villages, are ninja villages that serve as the military force for their country. 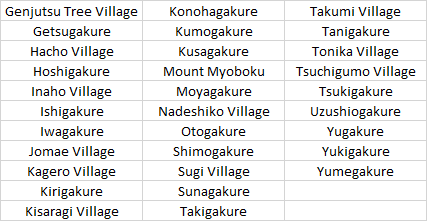 In summary, there are the 5 big nations, the 4 smaller one which make 9 nations. There are 28 minor countries (or 7 more if you count the not categorized countries) and 31 hidden villages.

Most of the information are from the Narutopedia. Other information from the frozen site narutoarikiri. A cached version is available here.

There is definitvely more than 5 countries. You can find all the countries on this site:

First there are the 5 villages:

Then the hidden villages:

Also in the Naruto manga (I forgot what book but the one with Edo Haku and and Edo Sasori), it says that the main hidden villages asked hidden Frost and Steam to move to a safer place, so it was somewhat involving them. Then when Sasuke revived Orochimaru they went to the battle field with Karin Jugo and Suigetsu (and the past hokages), this doesn't count as hidden Sound.

11
How were there 80,000 ninjas in the Shinobi World War in Naruto?
11
How powerful are Koharu Utatane and Homura Mitokado now?
6
Are there any slugs besides Katsuyu in the Naruto universe?
8
What are the similarities and differences between Reiatsu and Chakra?
7
How many tails did Naruto get during his fight with Pain?
2
Which episodes show the battle between Naruto with Madara and Tobi?
5
Are there other ways of reading the Uchiha Tablet?
10
World Map of Naruto Universe
3
Are there other clans than the Hyuga with the Byakugan
1
If there are thousands of ninjas in Konoha, why was Tsunade always short of ninjas for the missions in the anime?