Whenever Sasahara does something mildly inappropriate in Tachibana's presence, such as playing video games under the desk or reading a manga while he's supposed to be working on some sort of school assignment, Tachibana reacts out of proportion and unleashes a barrage of deadly firepower, but he doesn't even react to that. What's this supposed to mean? 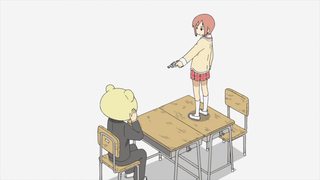 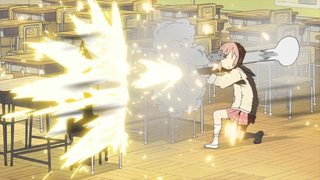 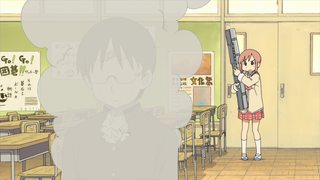 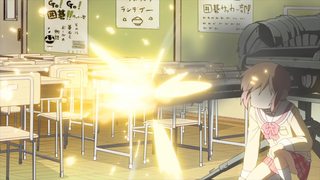 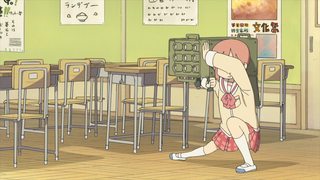 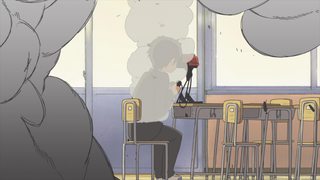 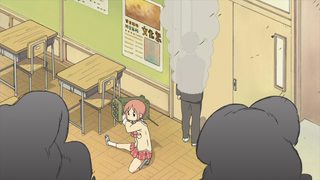 That is because Tachibana is a Tsundere, she even got her own slang term of it due to her extreme tsundere attitude, called GUNdere.

Misato Tachibana is a peach haired high school girl who generally acts cold towards Koujirou whenever he does anything that reminds her of how she likes him, or simply doing anything at all. She is a member of the Kendo club.

Misato's feelings usually materialize as assault with various guns and heavy weaponry that come out of nowhere, which Koujirou miraculously survives despite being injured, and just turns white with the dust. In reality Misato has feelings for Koujirou, but due to her tsundere attitude, she constantly denies her feelings and shoots Koujirou. She somehow manages to always trace everything back to Koujirou in conversations, even when he wasn't involved in it, leading her to wildly deny accusations, such as marriage and children, that nobody said. - Wiki

5
Why did Nano explode?
16
Why do Yuko's poems always end in 'Mogami River'?
10
Why is Sakurai-sensei always sweating like a sprinkler?
2
Why do the dogs pet the characters in Nichijou?
5
Why has a new chapter of ‘Nichijou’ been released when the serialization ended in 2015?