About Face and the demons of Tartaros

So one of the goals of Tartaros was

that they would activate Face, which would then wipe out magic all together from the world. Or at least from the continent, which would be quite helpful for them as they don't use magic, but rather curses.

However, it is clearly stated that the strongest members of Tartaros

are all demons created by the dark mage Zeref himself. Even if they don't use magic, they are just Zeref's living magic.

Doesn't that make them vulnerable to Face? Wouldn't it kill them?

Actually even if the demons are created by Zeref's magic, they will not die as they are not magic objects but actual living beings. He created these living beings using his Living Magic (Seikatsu Mahou), thus breathing life into them which means they no longer need his magic to continue living. Thus, when all magic will disappear, they will continue to live and their curses won't be affected.

They would'nt be affected by the power of FACE , coz' it was clearly stated that ONLY MAGIC which is the Magic User , not them . Their power came from Curse not in Magic . They are planning on a revolution , that would change the world . But that is one of their goal , their main goal is to revive their Master . which is named as E.N.D , the guild master of Tartaros and the strongest demon creation of Zeref . I forgot that chapter where her/he stated that they will not be affected by the FACE Ability .

The FACE will steal all MAGIC ability from humans and usher in the age of us DEMON - kind . 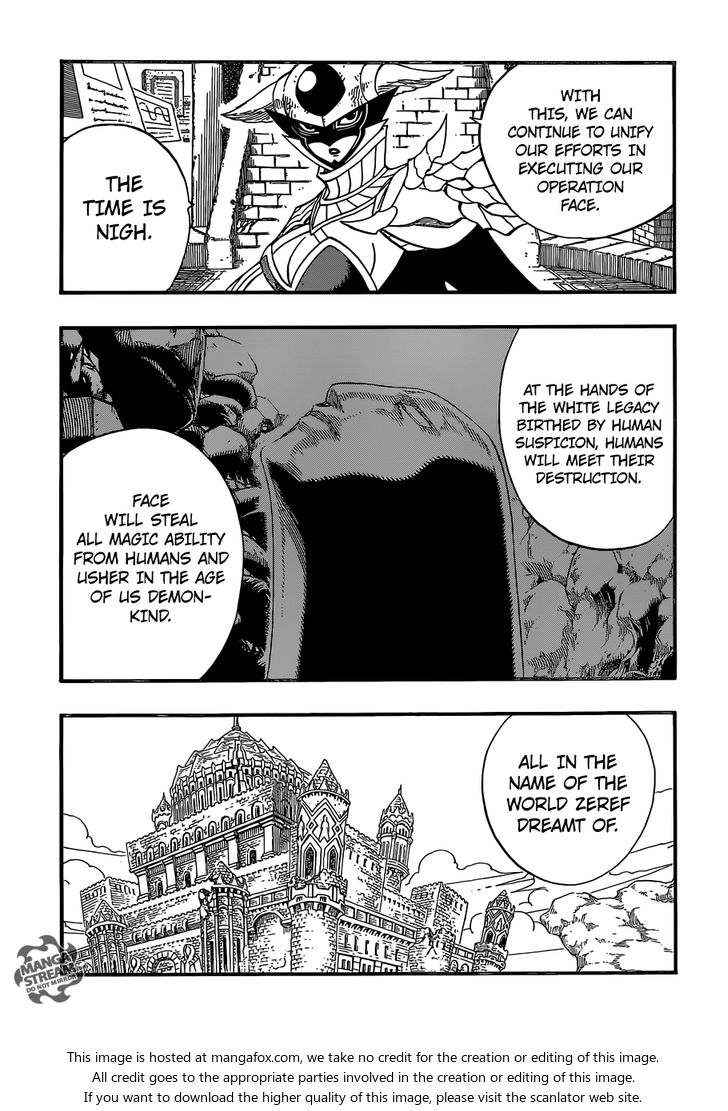 Now the demons of Zeref are all created by the Living Magic spell, or so it seems, but with the latter addition of the known as Curse Power, which doesn't have a magical nature and it's instead related to something else (humans emotions).

In short, Zeref's demons may have been created using magic power, but they do not have any magic power inside of them and thus are inmune to FACE effects.

7
Who did Mirajane, Gildarts and Erza face off against to become a S-Class Mage?
6
Did Rogue and Gajeel ever meet before the Tournament?
9
What dictates who can use what magic in Fairy Tail?
11
What is the relationship between Natsu and E.N.D?
2
What're the names of the Thunder and Poison Dragons?
7
What is the background about the tattoo around Jellal's eye?
2
What was Natsu dreaming about in Lucy's room?
2
Weren't the names in Edolas and Earthland the same?
1
Why didn't wizards get magic deficiency syndrome in Edolas?
0
Why did Makarov not use Fairy Law against Tartaros?